Brian Butcher’s freakish non-typical buck has largely flown under the radar, but the 321-inch whitetail, taken in October 2019, is a new Kansas state record and the second-largest hunter-taken buck of all time 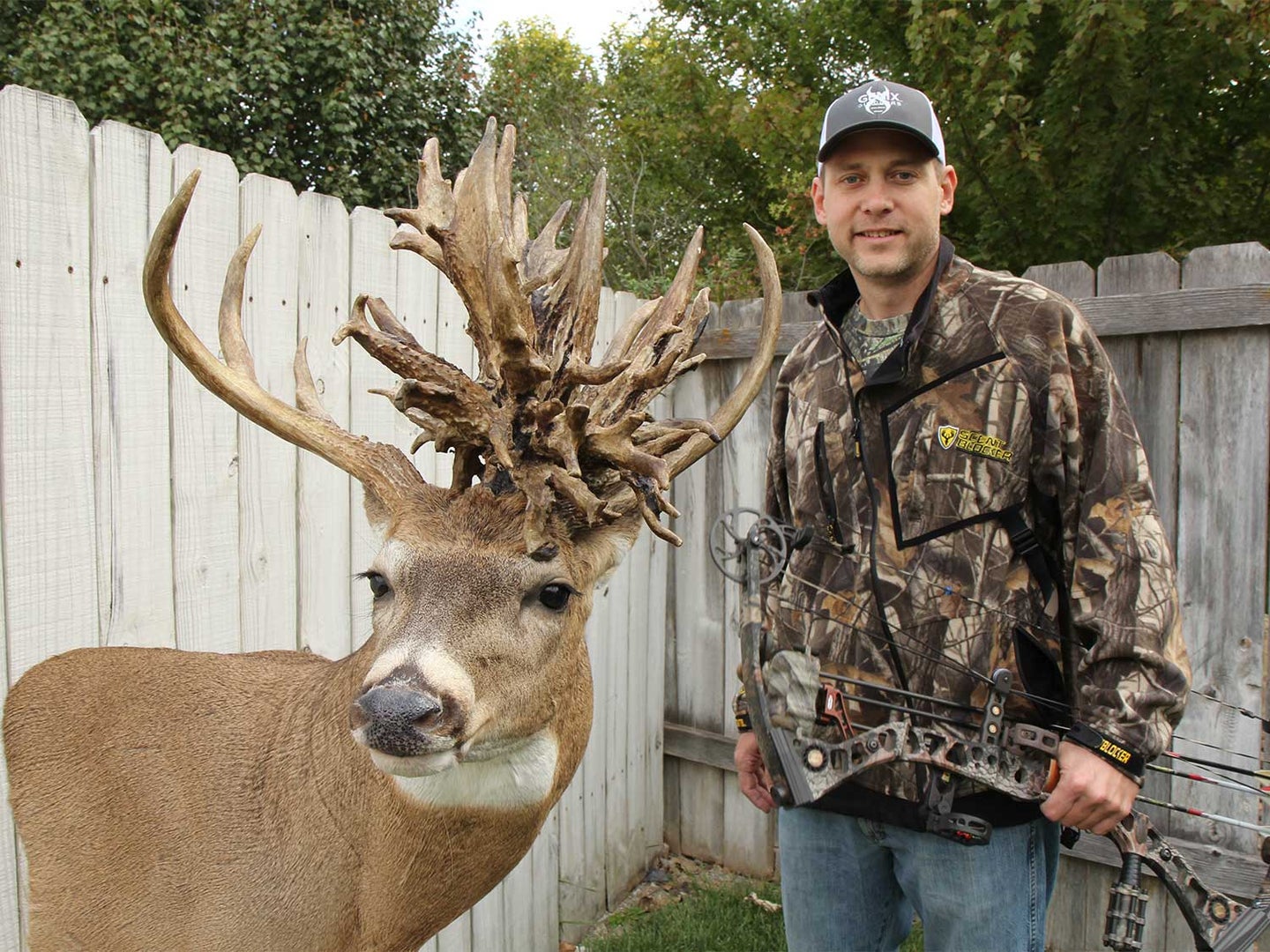 Brian Butcher with his incredible state-record buck. Will Brantley
SHARE

Brian Butcher had low expectations when he climbed into a deer stand on the evening of October 11, 2019. He would end up making the big-buck history books by killing a 321⅜ -inch non-typical whitetail—a new Kansas state record and the second-largest hunter-taken buck of all time.

But before that happened, most signs pointed to a slow hunt. Butcher wasn’t as prepared for the 2019 season as he would’ve liked. Work obligations had gotten in the way of his usual summertime prep work. He and his buddies Luke and Clint had made a trip to the farm they hunt during the first week in October to move a ladder stand and hang some trail cameras, but even that didn’t go as planned. Clint lost a tote of hunting gear off the four-wheeler, and they didn’t make it around to cutting lanes for the stand.

Butcher returned on the 11th to help his buddy find the lost tote and to cut the shooting lanes. Afterward, Butched planned to hunt a stand a creek draw, where he suspected acorns were falling. But when he got there, cattle that had gotten out were shuffling around under the tree. With limited time and options, he decided to go back to the ladder stand, where they’d just cut the lanes. When he got there, he jumped four deer.

“We’d just made all kinds of commotion, cutting lanes and spooking deer,” Butcher says. But still, he had hope. A cold front was moving in that evening, and the family ground he hunts has plenty of deer. “Our place is in the Flint Hills and has ideal habitat with river-bottom agriculture, CRP fields, and pastures,” he says. “Most importantly, it has a creek going through it, so the place holds animals all year long. Being able to hunt the same property, you learn things every year that you can use the following season.”

Butcher is a fast learner. He’s 39 years old, born and raised in Kansas, and has worked at United Van Lines moving for most of his life. That’s where he met his buddy (and boss) Brian Crowe, who is a serious bowhunter. Crowe urged Butcher to get himself a bow, so he’d have more time in the woods. “My first bowhunt was for spring turkeys. Brian taught me to call, we went out, and I killed a bird,” Butcher says. “Since then, bowhunting has become an obsession.”

Butcher started out shooting a Diamond bow but bought a used Mathews Switchback in 2010 that he’s been using ever since. He’s killed a number of does and a couple good bucks with it, and that trusty compound was in his hand on the evening of October 11.

Butcher Gets a Shot at the State-Record Buck

Despite the busted deer and the noise, a little buck walked in shortly after Butcher settled into the ladder stand. A 9-pointer came in a short time later, and fed within bow range for a half hour. “He stood there actually eating leaves off the branches we’d just trimmed,” Butcher says. “He walked off at 5:50. Less than five minutes later, I looked back to the East and saw two deer coming my way.”

One was a monstrous buck that seemed to have something wrong with its head, like a tumbleweed tangled its rack. Butcher says he’d gotten a trail camera picture of a big deer on the place back in April with a bulbous growth of antler, but otherwise had no indication that such an animal was in the area. “I remembered that picture, and I knew something was up with that deer’s antlers. But as summer wore on, we just forgot about it.”

But now, with the buck getting closer, Butcher knew he’d be taking a shot if he got the chance. The two deer were about 50 yards away, walking through a draw on the edge of a CRP field. Then they veered and came right to Butcher’s his stand. When the buck passed within 25 yards, Butcher came to full draw, settled his pin, and took the shot.

“Soon as it hit, the deer mule-kicked and took off,” he says. Butcher sat in the tree for several minutes, but he felt confident in the hit. He soon climbed down to look for his arrow, and found it within a few yards, soaked in bubbly blood. The trail was easy to see, and Butcher quickly found the buck just 50 yards away.

“I was blown away,” he says. “I knew it had a bunch of antler when I shot, but I had no idea the number of points or the magnitude of it. I’d never seen anything like it. I stood there a few minutes, took in the moment, and then took off running back to my truck. I never get cell phone service out there, but somehow I got a call out to my uncle. He answered, and I was out of breath, and full of emotion. ‘You all right?’ he asked. I told him, ‘Yes, but come quick—and bring the 4-wheeler if you can.’”

The Buck Breaks The 300 Inch Mark

With the buck field-dressed and in the truck, Butcher headed back to town. He sent Brian Crowe, who was out of town on an antelope hunt, a few pictures, and Crowe replied, “Is that thing real?”

Then he called up his buddy Luke, who’d been there earlier in the day to help with the stand. “He was at a dance with his wife, in a suit and tie, and I went in and picked him up. We went back to his garage, deboned the deer and took care of it, and a small crowd gathered. Some guys took pictures and videos, and that’s when it really went viral, in a sense.”

Even as crazy non-typicals go, Butcher’s buck looks different. “We were trying to count points and came up with 30—then 40, then 50. I thought it was a 200-inch deer, but I didn’t know. Bowhunters dream of a 200-inch deer.”

It wasn’t until Crowe returned home that they actually tried scoring the buck—and they came up with a mind-boggling 341 gross and 316 net. “You fill up an entire sheet with measurements, and add it up, and it’s overwhelming,” Butcher says. “So we measured it again the next day, and again a couple days later. Every time it measured over 300 inches net, but Brian wasn’t positive what the common base was on the left antler.”

Butcher was careful not to make a splash over the number before having the buck officially measured. He waited the required 60 days, and then approached Marc Murrell with Kansas Parks and Wildlife, who is an official measurer, and they set a December 12 date to have the buck scored. But as that date neared, Murrell, who’d been in contact with staff at Boone and Crockett headquarters regarding the deer, was asked to show the rack to Richard Hale, chairman of the B&C Big Game Records Committee. There was initially concern that the deer couldn’t be scored at all.

The reason? B&C has a couple policies that disqualify certain bucks from entry. One is the “Freak Trophies” policy, which says antlers without a discernable main beam can’t be measured using the B&C scoring system, and are thus ineligible for the record books.

The other is the “Stags not Eligible for Entry” policy, a rule that exists because bucks that have been castrated somehow often keep growing antler masses without shedding them and sometimes without shedding velvet. (They’re commonly called cactus bucks.) A good many “stag” bucks develop fountain-shaped masses of antler, similar to the Butcher Buck, that don’t stop growing until the deer dies.

Concerned over this, Butcher himself contacted Hale, who lives in Kansas, and asked if he’d examine the rack in person. Hale agreed and met Butcher. “It was a short, quiet visit,” Butcher says. The “Stags” concern was ruled out, partly because of the springtime trail-camera photos of the deer that clearly showed the antlers growing normally, even if they did look crazy. Plus, the buck had clearly shed its velvet.

“The real sticking point was whether or not the crazy side could be defined as a main beam,” Butcher says. Hale told him that he was going to Montana to discuss the buck with the committee. “A few days later, I got a call, and they’d voted unanimously to score it.”

Covid Keeps News of the Buck From Getting Out

The buck was finally measured behind closed doors on Jan. 3, 2020, where it taped out at 321⅜ net and 343-4/8 gross. That is the accepted entry score, but per B&C rules, anything in the top five all-time must be verified by a judge’s panel scoring before being officially recognized.

But that score isn’t likely to change enough to make any difference in the Butcher Buck’s all-time ranking. The final net score is 6-4/8 inches smaller than the Luke Brewster Buck, the highest-scoring hunter-killed whitetail of all time. But interestingly, if you’re the sort who thinks nets are for fish, the Butcher Buck’s gross score is 6⅛ inches bigger than the Brewster Buck’s.

News of the deer then spread fast after the Kansas Department of Wildlife, Parks, and Tourism issued a press release. Butcher appeared at the Archery Trade Association show with the rack a couple weeks later, where he drew a crowd—but then in March, the Covid-19 Pandemic stole every other headline.

“I had to be patient,” Butcher says. “Just before Covid, I was able to go to a few shows, and I sent the rack to Antlers by Klaus for replicas—and then they shut down. I was then without the antlers for longer than I was with them.”

But Butcher has the shoulder mount at home now. Despite the deer’s size and ranking in the history books, Butcher acknowledges that it’s just one strange-looking deer. “To me, you look at Luke Brewster’s buck, and it’s just incredible,” he says. “It’s what you picture when you envision a 300-inch deer. Frankly, this one isn’t. I think that’s part of the reason it’s flown more under the radar, but I haven’t really tried to get the word out, either.”

Strange or not, it’s an incredible buck—and a good reminder of the most important of all big-buck hunting rules: Get out there, even if you have to sit in a second-choice stand that you just moved, where you just cut shooting lanes, and where just spooked a bunch of deer.