Hunting for whitetail sheds is the perfect way to spend the postseason. Here’s how to find them 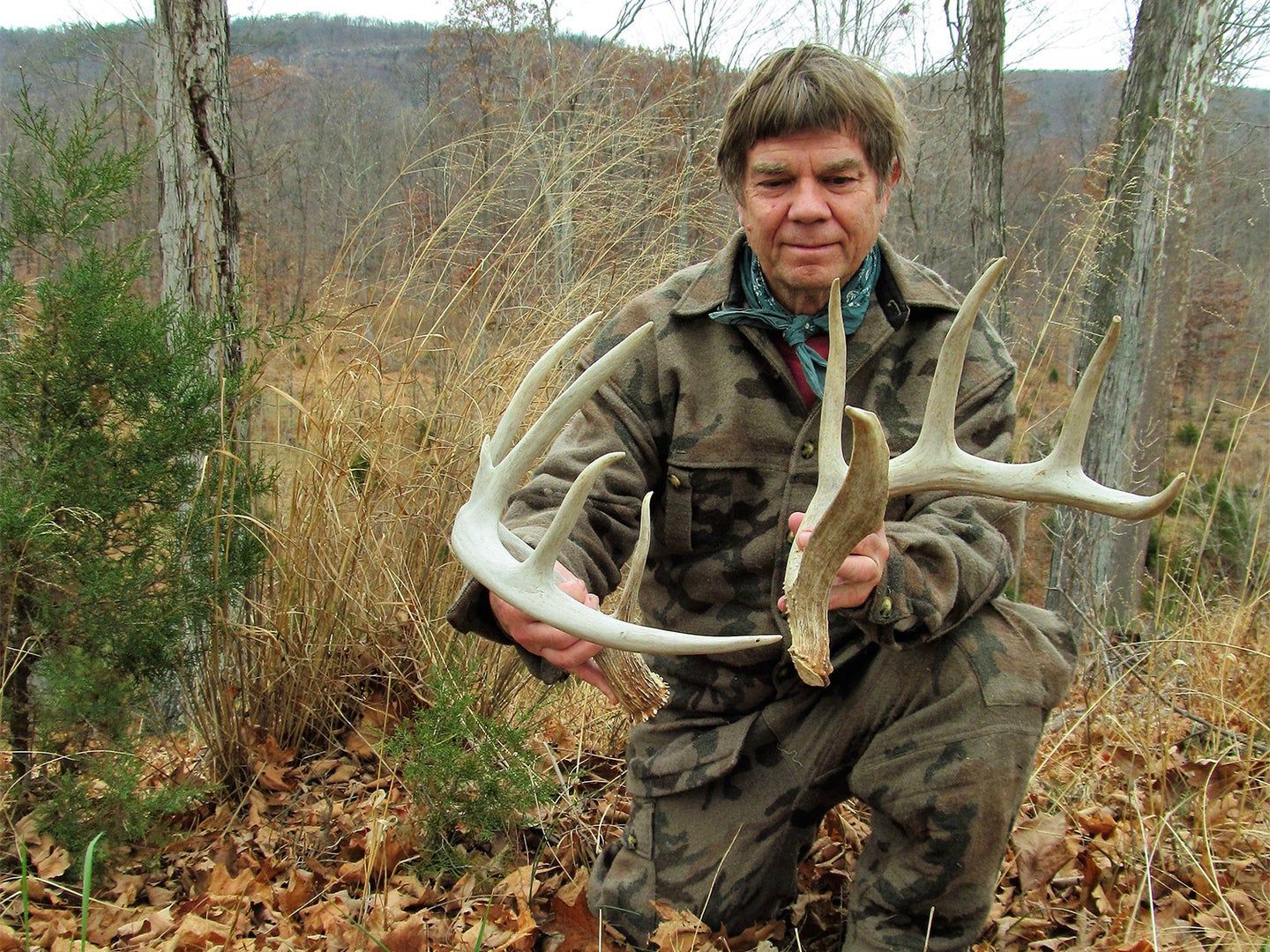 The author admires his largest matched set of sheds—a 170-plus class whitetail found while shed hunting in Virginia in March, likely from a 6-year-old-plus buck. Gerald Almy
SHARE

Sure, we’ve all heard our fill about the joys and rewards of shed hunting. It’s great exercise, you can learn what bucks are still roaming the woods, discover movement patterns and bedding areas, get to see how antlers actually score that you estimated from trail cam images, it’s a bridge between deer and turkey seasons, a fun family activity, etc…

But what about some practical advice on how to find more sheds?

Having been under the spell of this consuming passion for over two decades, and being lucky to find countless sheds from pinky-sized spikes to 170-inch-plus matched sets, here are the 18 most important things I’ve learned that might help you discover more head bone this winter and spring.

Most whitetails lose their antlers between late January and the end of March. Monitor your local herd and you should be able to predict within days when the drop will start. Chances are it will be about the same every year. Trail cameras can help with images of one-horned bucks or big-bodied deer without racks.

Get out quickly after that, especially if the area sees heavy shed hunting pressure. This early start may mean you’ll have to go back and check some prime areas again later, but that’s always a good idea anyway. Wait too long and mice and chipmunks will gnaw on shed antlers to extract the calcium and phosphorous.

(One exception: If the weather is brutally cold with deep snow, consider putting off your search of bedding areas until temperatures moderate to avoid stressing winter-weakened animals you might jump up. The snow is likely hiding many sheds anyway.)

I’ve found sheds in outlandish places. (One heavy five-point shed stared back at me right beside my truck in the driveway.) But for the most part, you’ll do best shed hunting in more remote locations, and one of the top spots is a bedding area. Probe thick, steep, or swampy cover far from access areas. That’s where mature bucks bed after a long fall and winter of hunting pressure.

Prime spots include conifer stands that block the wind and offer thermal protection, overgrown marshes, benches just below ridgelines, saddles, thick creek bottoms, clear-cuts that are growing back, islands in rivers, and the heads of brushy draws. These are not only prime daytime bedding sites but also locations mature animals flee to in high-pressure hunting areas. They are also places where bucks spend the majority of their time in late winter, making them consistent hot spots. I’d estimate 75 percent of the mature buck sheds I find are in bedding or remote escape cover.

While they mostly hunker down in thick isolated spots, bucks do have to move to eat. That makes the next best spots to look, travel routes and transition corridors. Search trails that spoke outwards from known bedding areas, leading straight or meandering towards major food sources. Sometimes these feeding locations will be a long distance away, other times close to the bedding area. Mature bucks will use different routes on different days, so scour the habitat carefully near any major trails as well as the path itself. Thinly-outlined trails paralleling major routes are especially good spots to pick up big sheds from loner bucks.

They may be a bit faded, but you can still find rubs well after deer season. I’ve picked up several nice sheds right at the base of serious-sized rubs. Perhaps the buck worked the antler off by rubbing the tree one last time. Even more important than a single rub is a line of them. Follow it as far as you can and a thick shed could be your reward. It’s always good to scour the immediate area around extra-large rubs on thick, leg-sized trees. They are typically made by mature bucks in their core home territory.

Read Next: 4 Training Drills to Turn Your Retriever into an Antler Finder

Check for sheds in areas where a buck’s movement is constricted. These narrow passages, also called “funnels” or pinch points, stand out sharply in winter. They include strips of woods between fields, creek bottoms, saddles, brushy hollows, overgrown fence rows, shallow river crossings, or any other location that encourages deer to travel through a narrow area.

If a buck isn’t bedded down or moving, chances are he’s eating. Depending on where you hunt, these areas can sometimes rival bedding sites as prime spots to find sheds. They’re especially productive on private land or low-pressure setups. Search known food plots and agricultural fields that transition corridors lead to and areas with abundant browse that might draw deer. A buck could spend the whole night there, dropping his headgear while he feeds.

If the ground isn’t covered in snow, wheat fields can be magnets for late winter bucks, as can rye, oat, triticale, or barley fields. Across the middle of the country and into the south, clover fields see heavy late winter and early-spring visitation. If acorns are still present, oak flats can draw late-season bucks, too.

Lone trees or clusters of persimmon trees often hold their fruit well into January. From my office, I once watched one brute of a ten-pointer mount a late-cycling doe next to a persimmon tree in February and then proceed to chow down on the remaining fruit. Later that month I found one of the 150-class buck’s sheds within 50 yards of that tree.

Areas that have been burned nurture abundant forbs and weeds that draw bucks, and pale-colored antlers are easy to spot against the blackened background. State and federal forest service offices or your county extension agent may have information on where burns have taken place recently.

In hilly or mountainous terrain, don’t neglect these areas that receive the most sun in winter. A south-facing bench, saddle, or ridge end bathed in warm sunlight is a prime spot for a late winter buck to snooze, and just maybe drop his rack.

Fields of tall switchgrass, Indian grass, and big and little bluestem offer prime winter bedding cover. They protect deer from chilling winds, yet allow the sun’s rays to beam down and warm their bodies. Since these grasses grow 5-8 feet tall, mature bucks feel very comfortable bedding in them. Sheds can be tricky to find here, so try talking the landowner into burning the stand every 2-3 years. That will improve its growth and make even tiny fork-horn racks stand out.

It’s easy to overlook sheds if you just move randomly through these prime locations. Instead, follow a grid pattern. Work parallel, walking alongside hills and benches. Then move up or down 30-50 yards, depending on how thick the habitat is, and walk back the other way.

Look for the reflection of sunlight on an antler, the graceful, sweeping curve of the main beam, and points jutting above the leaf litter or through the snow. After a while you’ll train your eyes and brain to pick out sheds from leaves, grass, and soil almost instinctively.

Novice shed hunters often move too fast. This isn’t a race. Slow down and even rework some areas if they look good or if you’ve found one side of a rack nearby. Sometimes just going through an area from a new angle with different lighting conditions may turn up overlooked sheds. Also, check prime areas again a few weeks later for bucks that hold their antlers longer. Different bucks will shed later than others, and I’ve seen bucks keep their racks into late March, and rarely, even April. Don’t miss the chance to collect those late-dropping horns.

Almost any dog can be trained to find sheds, even lazy house pets. After all, a shed is just a big bone. Just let the canine know who gets the antlers. And don’t bring a dog that will chase deer.

This may seem counterintuitive, but overcast, drizzly days are best for spotting antlers. Sheds seem to glow with an inner light during these conditions and show up far more readily than on bright sunny days. Overcast days are second best. On clear days, hunt early and late. Sheds show up better than under a bright midday sun with its harsh shadows and glare. Wearing polarizing glasses helps when the sun is out.

If you’re lucky, a buck will drop both antlers close together. That’s the exception, though, rather than the rule. I’ve seen bucks with one antler roaming around for days before they drop the other side—sometimes a mile away. Keep at it and you might find that matched set. But don’t expect it to come easily.

Read Next: Searching for Whitetail Sheds

Carry a sturdy walking stick and a daypack for lunch, water, and any sheds you find. A pair of 7-10 power binoculars will help you examine suspicious objects at a distance that you would otherwise have to walk over to. More than once I’ve had white or tan objects turn out to be jumbo sheds when scrutinized with optics.

Take a map or notebook and pen and mark where you find sheds, especially those of mature bucks. Not only will this information tell you good spots to search next year, it can help you plan this fall’s hunting strategy.

A final piece of advice for shed hunting isn’t a strategy so much as an attitude. You should hunt sheds because you like to hunt sheds. Don’t go into it competitively, or feeling like a day when you don’t find any sheds is a waste of time. This is a marvelous sport. Keep it that way by keeping your expectations in check and enjoying those many “fringe benefits” we downplayed earlier. Have fun, learn about your deer woods, and consider any sheds you find a bonus.