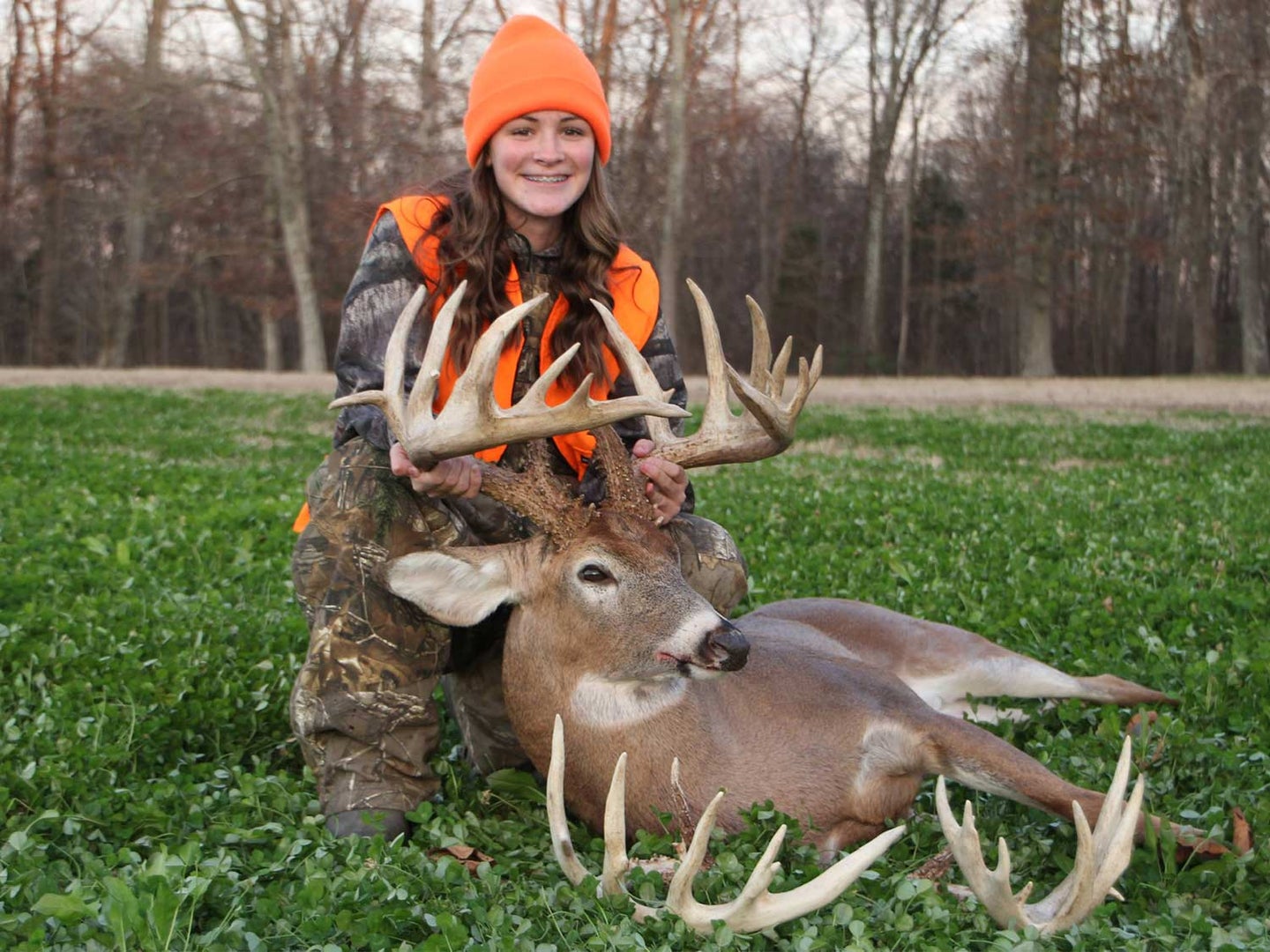 This photo clearly shows the bucks sheds from the previous spring, which were found by a neighbor’s friend. Duane Flood
SHARE

Fifteen-year-old Kentuckian Claire Flood had enjoyed some deer hunts with her dad before, but she’ll probably have to wait a while to top the afternoon of November 18th. She not only dropped the hammer on her first whitetail deer ever, but the giant buck topped the 200-inch mark. The young hunter performed like a veteran when the buck of a lifetime walked within 30 yards of a ladder stand on the family’s 100-acre farm, where she waited with her dad, Duane Flood.

Claire gave herself a fairly lofty goal when she started hunting this season. Her cousin, Brandi Stevens, had just shot her first buck on opening day, and Claire told her dad, “I’m only shooting a buck if it’s bigger than Brandi’s.” Trouble was, Stevens’ 10-point, Anderson County buck was green-scored by her taxidermist at 145 B&C. “She was determined to get one bigger than mine,” Stevens says. “She did it, and we are all so proud of her!”

Claire has been interested in the outdoors for years, but it was actually COVID-19 that spurred her to spend more time in a treestand this fall. “She went hunting with me a handful of times in 2018, but sports and other commitments didn’t give her much time last fall,” her father, Duane, says. “This year, with the COVID restrictions, she stayed home a lot and was always outdoors, riding 4-wheelers, riding horses, and fishing. Early in the fall, she was telling me that she’d been seeing some big bucks and that made her want to go deer hunting.”

Duane got off work early on the afternoon of November 18th and noticed that the cornfield next to their woods had been picked. He and Claire headed for their stand and spotted a buck at around 4:15. “I said, ‘That would be a nice first buck.’ But Claire followed him through her scope and said, ‘He’s got to be a real nice one, or I’m not shooting.” Then a big doe came through, and Duane heard a noise behind them but couldn’t see the deer. Claire slowly turned and said, “He’s a big one Dad! I’m going to shoot.”

Claire watched as the buck reached a logging road and headed toward the stand. “She was leaning across me and looking at him through the scope when she whispered, ‘Dad, he has eight points on one side!’ I told her to quit looking at his antlers and take a deep breath and squeeze the trigger. She was panting, and I swear I could hear her heart beating,” Duane laughed. “I was afraid she was going to fog up her scope. But when the buck walked another 20 yards I could finally see him well, and I knew why she was so torn up.” Claire used the stand as a rest, took a deep breath, and shot. “I could see that she hit him well, right behind the front leg. He humped up and trotted 20 more yards and was looking weak. I told her to shoot again to make sure. She did, and he laid right down.”

“Claire was so excited,” says her dad. “We got down out of the stand and walked over to him and…wow, what a buck. A friend of mine and his son, who’ve killed some very nice bucks, came over and were amazed,” Duane says. “One of the son’s friends had actually found the buck’s sheds last March and brought them over for some photos the next day.”

Claire’s buck had 22 scoreable points, 27-inch main beams, an 18-inch inside spread, and 6-inch bases, with circumferences still measuring 6 inches between the 3rd and 4th points. Two official measurers have placed the green score above 200. Claire’s dad says that she recognizes that she may never top her 2020 buck. “Most people never even see a deer this big, much less shoot one.” So Claire has a new goal. “A big gobbler is next on her list.”