The Best Recipes and Drinks for Hunting Camp

How to set a killer happy hour spread, cook a mean biscuit, to fix a feast fit for a king 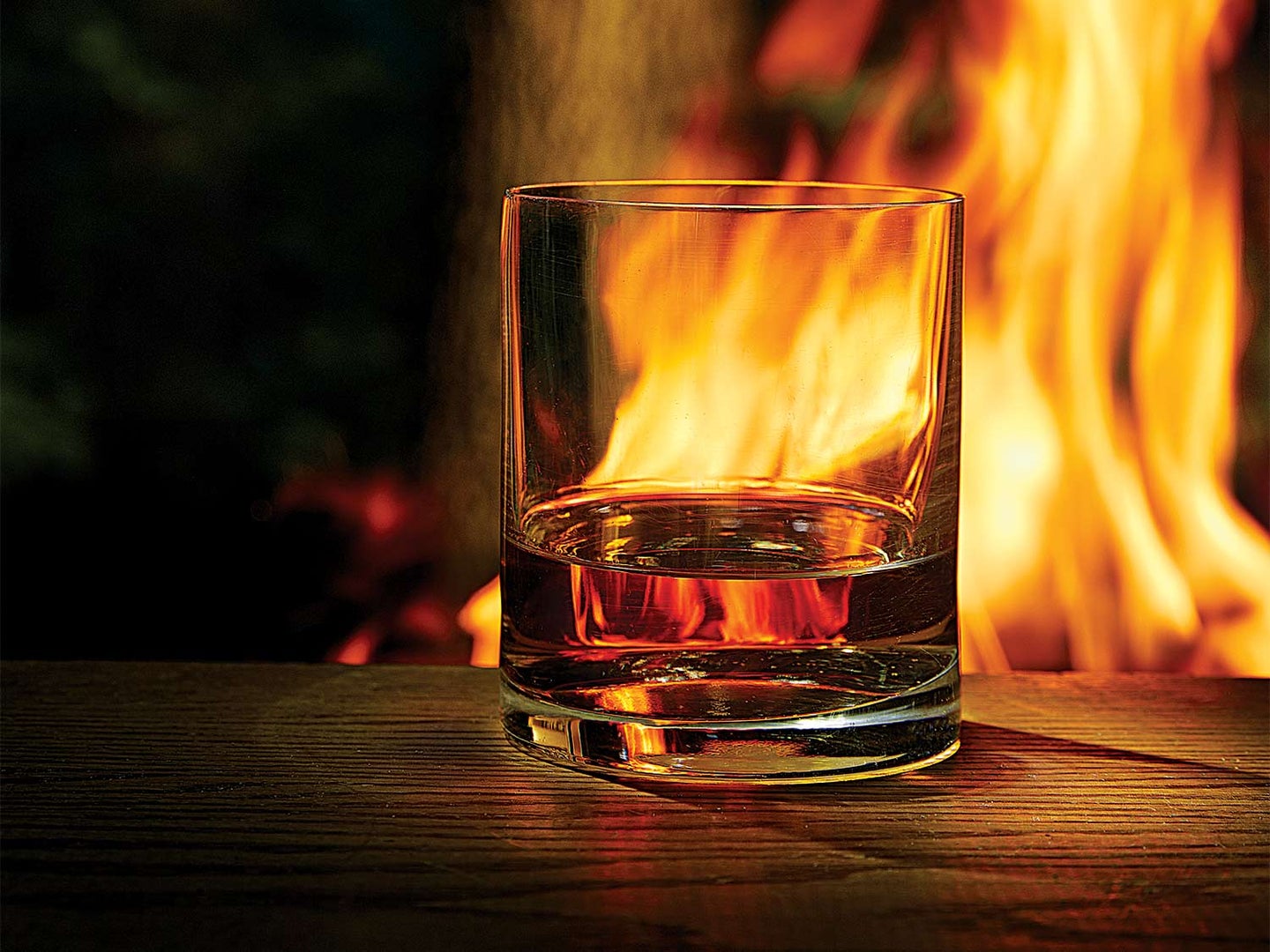 A glass of whiskey at night next to a campfire. Ralph Smith
SHARE

One thing about hunting camp: Even if the hunting is terrible, at least you can rely on some good eating. Whether it’s a pot of venison chili, the greatest, perfectly-cooked backstrap recipe, or a warm meal that’s been bubbling in the slow-cooker all day, hunting camp is a place for great meals. Here, our editors share their favorite tips and recipes for all four meals of the day—breakfast, lunch, happy hour, and dinner.

Kick Back at Happy Hour

More than once, I’ve spoiled my appetite for dinner during happy hour. Put out a plate of cured meat with cheese and crackers, and I’m helpless. If I were forced to pick my favorite food group, it’d be snacks. I’ve been a guest at camps that served some wildly extravagant spreads—­mountain lion meatballs, walleye wontons, goose-pastrami ­sliders—and I was in hog heaven. Happy hour at our deer camp in New York, on the other hand, is typically minimal: summer sausage, a brick of cheese, and a sleeve of crackers.

Both could not be more different.

Both could not be more delicious.

Because a camp happy hour isn’t about the food (or drinks). It’s about the ritual of coming together after a day in the field and taking turns swapping stories of our hunts—the things we saw, the shots we took, the tags we punched. This nightly story session is one aspect I enjoy most about camp; the fact that it comes with snacks (and drinks) is only a bonus.

Far be it from me to tell you what to serve at a camp happy hour, but I’d be remiss if I didn’t share a few suggestions:

Other than that, don’t forget to toast your fellow ­hunters—and don’t eat too much. Remember, ­dinner’ll be ready soon. —Colin Kearns

Aside from the fact that it was simply a thing of beauty—thoughtfully designed, sturdy, and true, meticulously hand-painted, even—the box made a world of difference in keeping our small wall-tent kitchen organized. Dishes, mugs, cutting boards, paper towels, utensils, you name it—they all had their place, which meant we had more space to kick back in the tent and relax after our hunts.

You could purchase a chuck box, but it’s tough to think of a better preseason camp project than making your own; building plans for DIY chuck boxes are easy to find online. While it might sound silly to wax poetic about a chuck box, it really did become a source of pride at camp last year. And it’s fun to imagine how well the chuck box will age and take on even more character, year after year, at deer camp. —C.K.

Get the Good Stuff

There is a name for any alcohol-free bivouac of sportsmen. It’s called “Camp This Has Been Great. I’m Leaving.” Alcohol doesn’t make camp, but it makes camp more comfortable. Booze selection is one area where you don’t want to econo­mize. It’s not that anyone will resent a shot of Ol’ Buffalo Lump; it is just that if you get the good stuff and share it liberally, everyone will take note. As of this writing, the virus is preventing me from blowing money on all sorts of frivolous crap and, well, doing much of anything else either. When I finally get that opportunity, I want sharing a drink to be memorable. Also, if you are a younger member at camp, do not bring any whiskey flavored with peach, cinnamon, maple, toffee, or peanut butter. Older guys see this as a provocation and will run you off. And I will be one of them. —B.H.

A Feast Fit for a King

In December 1950, a Mississippian named John Cullen mailed a letter to King Gustaf VI Adolf of Sweden, inviting His Majesty to dinner the following autumn at the deer camp where Cullen was a member. The king had recently bestowed an honor, the Nobel Prize in Literature, upon another of the camp’s members—William Faulkner. Cullen wanted to reciprocate. A camp favorite, “coon and collards,” would be part of the menu, he wrote.

The dinner never happened, however, because the king graciously declined. But ever since reading about Cullen’s invitation many years ago, I’ve wished that it had. Not for the sake of the members, who would’ve doubtless seen their hunting curtailed by all the pomp and preparation, but for the sake of the Swedish monarch. Even in its simplest mani­festations, a hunting-camp dinner, then as now, is a unique and sublime occasion—the closest descendant to the original communal dinners where prehistoric hunters charred their kills over a fire, and where, I might add, the act of storytelling almost certainly began.

Cullen and Faulkner’s deer camp, despite its Nobel affili­ation, was nothing fancy: a galvanized tin structure in the silty bottomlands of the Mississippi Delta housing 16 bunks and a makeshift kitchen. Heat came from burning logs in a repurposed oil drum, and the wine was home-brewed from muscadine grapes. The dinner fare would’ve been designed to appeal as much to the gut as to the palate: coon and collards, as Cullen advertised; broiled backstrap; biscuits or cornbread. The king would’ve had to serve himself, in the way we now call “family style.” From the table, he might have had to clear poker chips or a can of gun oil to make room for his plate.

But let’s not mistake rustic with simple—and let’s hope the king would not have either. Because underlying the rough-hewn pleasures of a camp dinner is an intricate and ancient web of relationships: between the hunter and the game, most importantly, but also between the hunters themselves, steeped in camaraderie as well as inevitable competition; between the young hunters and the old-timers; and between change and tradition.

Oh, there’s a lot of nonsense that gets passed around at the table. Cullen liked to debate whether it’d be possible to kill a deer with a Hula-Hoop. But the nonsense is to counterbalance the seriousness of the shared endeavor, the gravity of wildlife becoming wild death, the primordial calculus, in Faulkner’s words, of “when to shoot and not to shoot, when to kill and when not to kill, and, better, what to do with it afterward.” The camp table is where all that comes together, where the harvest is shared, where the stories are told (and the exaggerations refuted), where all the elaborate efforts that hunting requires—and by this I mean the procurement of land or lease, establishing a camp, carving time from work and family, traveling, the great rigmarole that precedes the hunter even lacing up his boots—come to their ordained conclusion. Where the circle is closed, in other words. Where “the best of all breathing and forever the best of all listening,” as Faulkner described the act of hunting, becomes the best of all eating. And where some unlucky soul, royalty or not, must always get saddled with dish-washing duty. —Jonathan Miles

Get Up and Bake a Mean Biscuit

Before the alarms go off; before the locals drive in with their truck tires crunching gravel; before the groans of middle-aged men unfolding themselves from bunk bed mattresses; before all this, I lie in my own deer camp bunk and listen to Tommy Krisulewicz in the kitchen.

Usually, by the time I’m awake, he’s already prepped the flour: four cups, self-rising, hand-cranked through the sifter. Tommy chills every tool he uses to make biscuits. He opens the freezer door and grabs the grater, which he uses to grate two sticks of butter into the flour, stirring the chunks with a butter knife to coat them well. Then he cuts the butter into the flour with the pastry blender. Thump-thump-thump.

The buttermilk, he says, is a feel thing. Maybe a cup or so to wet the mixture so he can form it into a ball. Out comes the rolling pin, and I can hear the old wooden cylinder rattling in its spindle. He rolls the dough ¾ inch thick, give or take, then folds it right to left and top to bottom. Rolls it out again and folds a second time: left to right, bottom to top. Rolls it out a final time, then cuts the round biscuit disks with the chilled cutter. Straight down and straight up, Tommy insists. Twist the cutter, and the biscuit edges will harden.

He loads the cast-iron skillet with biscuits touching “so they’ll smoosh up together as they rise,” he says. “Makes ’em rise taller. Trust me.” And we all do.

The biscuits bake at 450 degrees for 20 minutes, and by the time they come out of the oven, just about everyone is out of their beds, elbows on the tall counter, some ready to roll out in camo, others still in their underwear, all of us waiting on homemade Tommy K. biscuits.

Pass me that jelly.

A good day dawning. I can hear it now. —T. Edward Nickens