The Myth of the Western Hunting Bow

Believe it or not, your go-to compound for eastern whitetail deer will work just fine out West 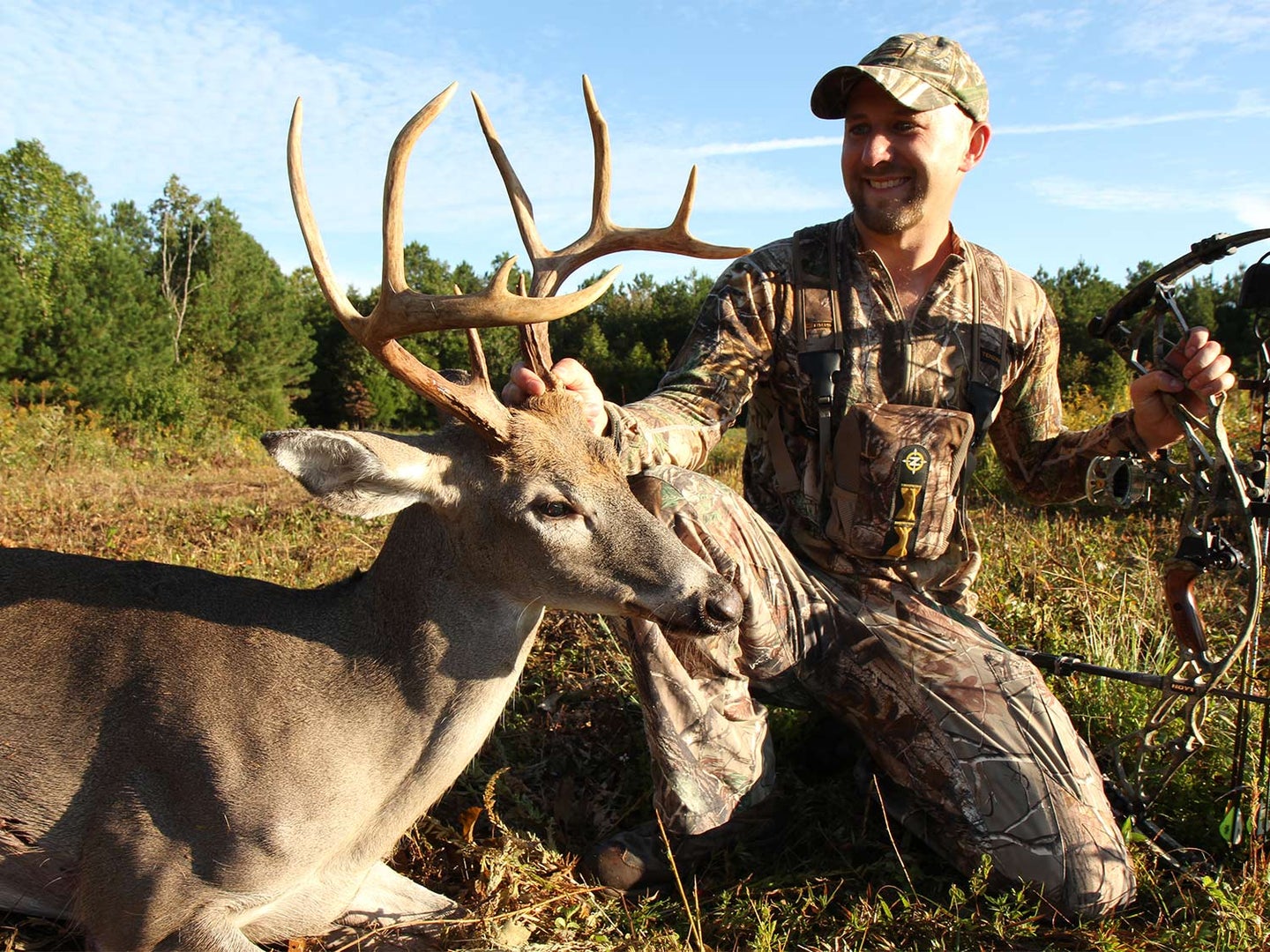 After years of messing with long axle-to-axle bows and single-pin sliders, the author has come to prefer a shorter bow with fixed pins once again—regardless of what he is hunting. Will Brantley
SHARE

My buddy Ryan and I drove 18 hours from Murray, Kentucky, to Craig, Colorado, and for roughly 17 of those hours, we discussed long-range bow shots. Ryan has hunted the Kentucky hardwoods all his life, but our road trip for antelope was his foray for Western big game. He was nervous about not being able to make a 50-yard shot with his bow, if it came down to it. I told him not to worry.

We got to camp with about an hour and a half of daylight to spare. Ryan shuffled his feet and said the scenery was pretty—but I knew what was on his mind. I urged him to jump in a blind for a bit while I unpacked and got supper ready. He hunted about 45 minutes before a big pronghorn buck ambled into range, and stopped broadside at 19 yards. Ryan reckoned that buck was big enough—not that he’d seen others to compare it to—and so he shot it through both lungs and watched the buck fall over dead. The fact that his old 60-pound bow, complete with a fixed five-pin sight and Whisker Biscuit, were all wrong for Western hunting didn’t matter, because my buddy Ryan is a killer.

I know exactly what the conventional advice on a Western hunting bow says because I’ve written it down myself. When I started going out West about a decade ago, long-range bowhunting was what all the cool kids were doing. I shot bows alongside some truly talented Utah archers who routinely killed mule deer at 80-plus yards. The equipment they used was specialized, and usually included a long axle-to-axle speed bow with a heavy draw weight, paired with a small-diameter, single-pin slider sight. A good many of them shot using back tension or thumb releases.

There’s nothing wrong with any of that, especially if it works for you. But I’ve since hunted enough out West—and been around enough other Western hunters—to realize that such a setup actually isn’t ideal for most archers. The fact is, even among good bowhunters, the guys who are truly deadly on game beyond 50 yards with a compound bow, regardless of how it’s set up, are a rarity.

As such, the idea of purposely building a “Western” bow specifically for long shots just isn’t practical for the average bowhunter, because those long-range features have drawbacks of their own. Whether you’re in Indiana or Idaho, your odds of killing a critter are better if you’re closer. And if you’re closer, the classic whitetail setup—boring though it may be—still has a lot going for it.

When it comes to seeing what works on Western game, not many have more practical experience than Scott Denny who along with his wife, Angie, runs Table Mountain Outfitters in Wyoming. “We have around 300 hunters a year, and a third or more are archery,” Scott told me. “So that’s 100 or so animals with a bow a year. Lots of antelope, but a lot of deer and elk, too. Our average shot distance on elk is 30 to 45 yards. We get 10-yard shots, and we get some 50-yard shots. But usually we can get them closer. Most of our antelope shots are 15 to 30 yards.”

Not all of Scott’s gear preferences match my own—more on that in a bit—but they’re pretty close. So, I started asking him about specifics.

I carried a 35-inch bow on my first elk hunt. After a week of horses and hiking and thickets, I was ready to be rid of the thing. I could shoot that bow well, but it was not handy—and that went for back home, too, whether I was hunting from a treestand or ground blind. Three seasons ago I switched to an ultra-short (28-inch) bow. I didn’t give up much, accuracy wise, but I gained a whole lot in hunting utility.

“Modern bows all shoot so well these days,” Scott says. “If you’re not a great shooter, maybe a long axle-to-axle bow can help you. But I don’t think it really has much bearing on whether a guy can shoot at 60 yards or not. Get a bow that’s well-tuned into the hands of someone proficient, and they can make the shot.”

A single-pin slider provides the cleanest sight picture for precise aiming at a distance. Pair it with the right sight tape and a dialed-in rangefinder, and a good shooter can group distant arrows with amazing precision. I’ve seen guys drop 6 shafts into the vitals of a 3D elk at 120 yards. We use single-pins during our annual bow test, too. On the range, they are fantastic.

But it took me a few seasons before finally admitting that I just don’t like them in the woods. Scott’s feelings are even stronger. “I hate them,” he says. “I tell my guys not to bring them. Everyone is too worried about moving them. They’re too busy adjusting their pin rather than drawing their bow when an elk comes in. I can’t tell you how many guys with single pins, stalking mule deer, have asked how far we’ll be when we get there. I have no idea. It’s a stalk, on a deer! But the buck jumps up, runs to 35 yards, and they either try to adjust a sight and miss the chance, or guess where to put the pin and miss.”

Many western hunters shoot speed bows set at maximum draw weight for the flattest trajectory possible. That’s fine, if you can handle it. But many hunters can’t handle it, and it’s not really needed these days, anyway. I hunted with a 70-pound bow for years, but have used 60-pound limbs for the past decade, and haven’t been able to see one bit of penetration difference on game. A few years ago, I shot a good mule deer buck that was nearly head-on at 30 yards. I hit him at the base of the neck, and when he fell dead a few feet later, the arrow was hanging by the fletch in the offside ham. I don’t need a bow to do much else.

“I get a lot of guys trying to shoot too much weight,” Scott says. “Archery elk hunting, especially, I need you to be able to draw almost while standing on your head. You can shoot through anything with a 60-pound bow. Sure, 70 pounds is nice, but if it’s even a little strain on you, you’re better off shooting a 60 that you can hold a little longer.”

Now we get to the fun stuff. Tough, compact, cut-on-contact broadheads get the nod from many Western hunters. Though I shoot a hybrid mechanical for whitetails at home, I usually switch to a fixed blade when I head West.

But Scott prefers a big two-blade mechanical. “They don’t pay me to say it, but I do like a slip-cam-style mechanical, like a Rage,” he says. “Especially on antelope and deer, but they work great on elk, too. If a hunter hits an animal a little back with a small cut-on-contact, we cringe because it’ll be tough to find. If it’s a big Trypan, we know we’ll get him. On elk, they have no trouble punching through ribs. And if you hit the knuckle of the shoulder, it doesn’t matter. There’s not a broadhead made that’ll go through that. Most animals that I’ve lost have been with a fixed blade. But if you’re confident in your broadhead, stick with that. If you hit both lungs, you’ve got him dead. But I do think the big expandables excel on the marginal shots.”

In about 25 years of bowhunting, I’ve only ever used a caliper-style, wrist-strap release aid. I’ve had my dealings with target panic, same as everyone else, and have played with thumb releases here and there. I don’t like them. Yet to see some of the shooting advice out there, it’s a wonder I’ve ever hit anything without one. The fact is, many of the best competitive archers won’t use anything but a thumb-style release, and plenty even use a true back-tension release.

What’s a guy like Scott Denny think of that? “I’ve had world champion archers hunt with me and not be able to hit an antelope at 30 yards because it was windy, and they were using a back-tension release,” he says. “Use a trigger. Shooting target gear while hunting doesn’t work.”

So, What Bow Should You Use to Hunt the West?

These days, I have two hunting bows rigged and ready. One is a 28-inch Mathews Triax with a five-pin Trophy Ridge sight that I’ve used for the past three seasons. It’s been good to me, and I can’t bring myself to retire it. The other is a new Elite Kure—a 32-inch bow with an HHA Tetra sight, which is a slider, but with a 4-pin housing. I removed one of those pins. I’m locked in at 20, 30, and 40 yards, which covers 95 percent of what I need in the woods, but I can slide the sight and use the top pin for longer ranges. I have a drop-away rest on both of them, and shoot the same finished 425-grain arrows out of both of them. Between a spring gobbler and a September elk I might change broadheads—but other than that, everything I bowhunt gets the same treatment.

The point of all this isn’t to say that your “Western” bow won’t work. Archery gear preferences are subjective, so whatever it is that you prefer, stick to it. However, if you’re planning your first Western hunt and feel like stressing over details, you’re far better off focusing on things like getting into good shape, carrying decent optics, and wearing good boots.

Your bow setup, so long as you can shoot it, doesn’t matter much. Just ask my buddy Ryan.