Brad Harris has tracked hundreds of wounded animals with a 98 percent success rate. Here are his tried-and-true tactics 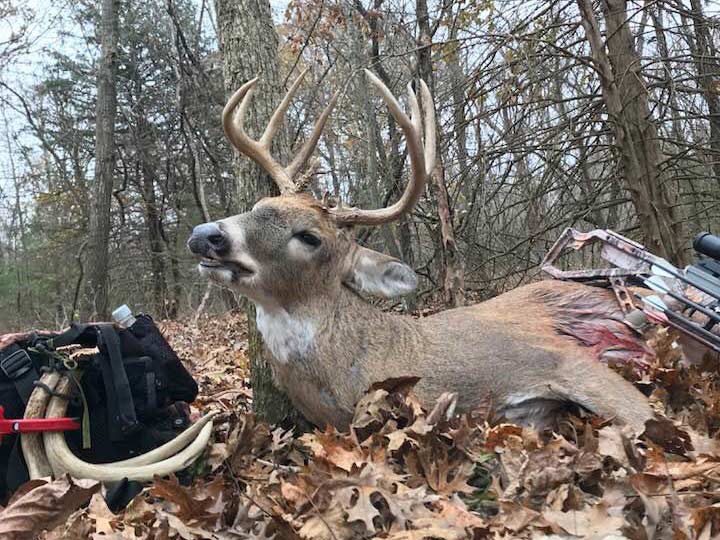 Assess your shot, determine the nature of the blood trail, and plan your track.
SHARE

Game recovery demands as much skill as pre-season scouting, patterning, and shooting, and that’s why Missouri’s Brad Harris has spent nearly five decades meticulously studying the process of finding wounded whitetails, muleys, and elk. His skills are significant—he has blood-trailed hundreds of big game animals and has a 98 percent recovery rate. It’s little wonder that during deer season his phone rings incessantly with buddies looking for help in finding their deer.

Harris began archery hunting in the 1970s. “During that era, there wasn’t a lot of information about blood tracking,” says Harris. “It wasn’t covered in magazine articles, videos, or cassettes. YouTube and podcasts were decades away, so I learned about bows, arrows, arrowheads, fletching, and shooting through trial and error. As a farmer, I’m used to planning my work and then working my plan, and after a while, I was consistently harvesting big game. Archery wasn’t as sophisticated in those days as it is now, and I had to work hard on my blood tracking skills to find hit animals. Over the years I’ve found that blood tracking is a combination of observation, prayer, and luck all rolled into one.”

“When you’ve hit an animal, the first order of business must be to completely and accurately remember what just took place,” says Harris. “Think carefully and precisely about what happened after you released your arrow or pulled the trigger. Ask yourself what occurred at the instant of the shot? Where was your animal standing, how did it respond to the impact, what did it do? Did it jump up, stagger around, or bolt forward? Did it move fast, slowly, or erratically? Where were you aiming and where might have you seen your arrow, bullet, or slug hit?

“The key is to have an honest assessment. Our minds can play tricks on us. We want a hunt to go a particular way. We’re typically confident in our marksmanship skills, and we all want heart or lung shots that kill quickly. But, things don’t always go as planned. Sometimes we wind up with, say, a gutshot. I track a gut-shot deer differently than one shot in the heart or lungs. Embellishment is always an error that puts us on the wrong tracking path. If you’ve honestly assessed the circumstances of the shot, you’ll recover more animals and have a strong foundation for the next step.

“Further, be aware of all the elements. From what direction was the wind blowing? Did the animal move into the wind or with the wind? What was the humidity like? What path did your buck start down? Was that path straight across a ridgeline or did it turn to run downhill? All of those things can matter. The more questions you successfully and honestly answer, the easier your tracking will be.”

“Have patience,” says Harris. “Haste makes waste, so don’t be in too big of a hurry to follow up the shot. It’s tempting to get out of your stand prematurely and start tracking. Animals die quickly from heart or lung shots. Depending on the hit to a liver, it might take between an hour and a half and six hours. Gut shots take about five hours while intestine hits might take up to two days. If you’re out of your stand inside of that, you’ll push the animals.

“A half-mile in a field is one thing, but jump a deer or an elk in the hills, and that terrain complicates things. The longer that animal is on its feet, the more the environment plays a factor. Rain, snow, wind that turns over leaves, and the like increase the difficulty. So think about your shot, where it hit, and give it some time. If the animal dropped in its tracks, toss something at it, it could be a shell, a twig, anything. If the animal then raises its head, twitches, or moves even the slightest bit, finish the job.

“Qualify your shot when you get down. That’s why it’s important to remember all parts of the shot sequence. If you saw an arrow pass through an animal, go find it. Go to the site of the shot and look for that initial blood. Arterial blood is bright red and spurts, so you’ll see lots of blood spread out around the area where you hit the animal. Lung blood is pink and has bubbles. Gut shots have a distinct odor, especially if you locate and smell a recovered arrow. Take an assessment of the shot and get ready to track.”

“Now that you understand the hit, you’re ready to get started,” says Harris. “Before I make a move, I study the area directly in front of me. When I find sign, I mark it with orange flagging tape. I add a piece of orange tape in each and every area I find sign. Some guys use toilet paper, but rain or a stiff wind can blow it from a marked twig or branch.

“First, I look for blood, hair, or hoof prints. I study every drop of blood to learn more about the shot. Is the blood flow increasing, decreasing, or staying the same? I keep marking spots as I move on, but some animals stop bleeding. If that happens, I’ll mark anything that moves me closer to the animal. I’ll tag rocks, leaves, or logs that are turned over, hoof prints, skid marks, stumbles, a dragged hoof, broken branches, matted-down grass—basically anything that gives me the proof that the animal moved in a particular direction. When I look back at my flagged areas, I’ll normally see a pattern. That pattern shows the direction the animal is traveling in and keeps me focused on following its path. Flags also keep me from getting confused and turned around in an unfamiliar area. This allows me to stay focused on what is important: tracking the animal.

“Double flag areas that don’t seem to make sense. Those are the spots that show a potential change in the direction. For instance, if there are several animals in the area, maybe a bull elk and a harem of cows, there may be hoof prints running haphazardly. Another example might be a predator tracking a wounded animal. Pressure from a predator causes an animal to behave differently, so double flag those areas. Double-flagged spots serve as a fall-back position. They mark areas that require further study to make sure that you’re moving forward correctly.”

“We all get to points in which the path gets cold,” says Harris. “That’s usually when frustration hits—and it makes us grab for straws. It causes us to wander around in the woods and look for a hail-Mary clue. What follows next are excuses. We’ll say: ‘The rain washed away the sign,’ or ‘the coyotes must have got him.’ That may be true, but you’ve got to resolve to find your animal. The animal didn’t vanish, so fully commit to the recovery and you’ll find more game.

“Frustration causes hunters to fast track the recovery process. Tracking can be especially problematic for hunters who know a property really well. Intimate knowledge of the woods makes us think we know where the animal ran. We avoid the facts of blood, hair, broken branches, and the like. Work slowly, be methodical, and look for what comes next. Each of those clues will move you closer toward your game. Getting frustrated does not.”

“If the track goes cold, retreat to your last orange mark,” says Harris. “Ask yourself, ‘What do the facts tell me I should be seeing?’ Don’t look for what you want to see, look for what happened. If nothing is revealed, then create a grid. Grids leave no area unturned. Go back to your last clear marker, pick a direction, set up a point, and slowly move forward toward it. If you don’t see something by the time you reached that marker, move over a few yards and work back to it. Then repeat that process until you’ve thoroughly combed the area. At some point, you will find a clue that will point you in the factual direction. It’s the last part of the equation to recovering your animal.”