After deer, duck, and most upland bird seasons are over, you can still hunt snowshoes in the northern half of the country 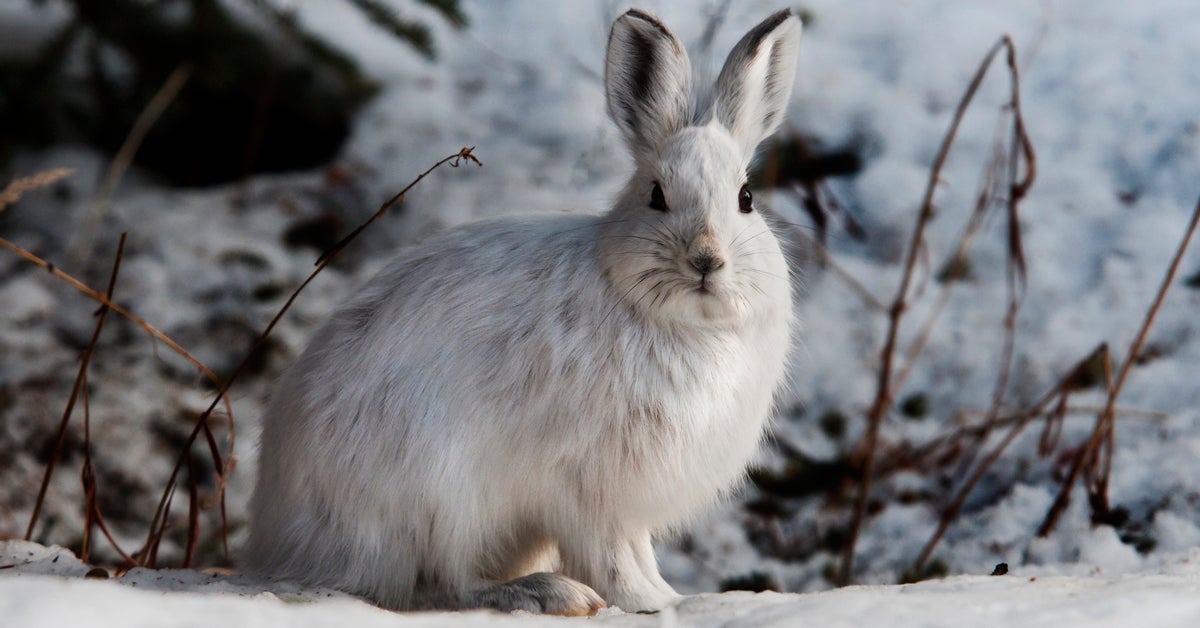 Snowshoe hares are brown for most of the year, but their coats turn white during the winter. Photograph courtesy of Denali National Park/Flickr
SHARE

It’s a typical predawn morning at camp. The crew of hunters pull on long johns and load packs while eggs and bacon sizzle on the stove. But instead of heading out before sunrise, as everyone here at Camp R&R would do during whitetail season, we linger over breakfast until the sun has a chance to take some of the chill out of the winter air.

Deer season is over, and now we’re after a different kind of game: the snowshoe rabbit, formally called the varying hare. Both names are fitting. Oversize, well-furred hind feet let the animal bound across deep snow at speeds approaching 30 mph, and its coat, which in late fall turns from brown to all white, helps conceal it from predators.

We finish the last of our coffee and step outside, carrying shotguns and snowshoes to the snowmobiles, where we load whining beagles into crates on trailing sleds. I ride with Richard Huntley—he and his lifelong friend Richard Burnham are the camp’s namesake Rs—as he leads the caravan of sleds into the big woods of Vermont’s remote Northeast Kingdom. The frozen trail winds across a series of hardwood ridges before dropping into a Christmas-card setting of snow-draped balsam firs and spruce trees. Past logging has created a productive patchwork of dense, young stands of softwoods interspersed with thick copses of hardwood saplings—excellent snowshoe habitat.

We get off the machines and strap on our snowshoes. Burnham lets Trapper and Rachel out of their crates and leads the dogs into the nearest thicket. He thrashes about in the powdery snow, trying to startle a rabbit into flight. Minutes later, Trapper’s muffled barks tell us he has scented one.

Both dogs are soon in full tongue. We fan out, trying to anticipate where the rabbit will circle back. Snowshoes are reluctant to leave their home territories, which in the winter average only 20 acres, and this is their undoing. When pushed by dogs, they run in loops that let waiting hunters intercept them.

I take a post at the edge of a small opening in a thick strip of cover. I strain to spot the approaching dogs through the brush, only to belatedly see the rabbit gliding silently by to my left, the white-on-white movement winking in and out of my sight. I wheel and empty both barrels of my 20-gauge, but the rabbit disappears into the spruces behind me. Three more times the rabbit slips by us unscathed until camp regular Dale Isham, quickly shucking his 28-gauge pump, finally drops it.

After resting the beagles and roasting some hot dogs over a fire kindled with paper-birch bark and dead spruce limbs, we’re back to the hunt. Almost immediately, we are into the first of three successful runs. Had we decided to shoot “strays” stirred up by the dogs during the chase, we could have added even more snowshoes to our growing bag. But with a season that, in most snowshoe states, stretches well into March, there is no compulsion to squeeze every opportunity out of the day.

How to Hunt Snowshoe Hares Without a Dog

Hunting snowshoes with a brace of beagles is the classic pursuit, but dogless hunters can get plenty of shooting. The traditional approach is simply to walk rabbits up, with one or more hunters moving abreast in an irregular pattern through cover.

Knowing the hare’s habits will pay off now. Snowshoes feed only at night, on the buds, twigs, and bark of woody shrubs and tender saplings like aspen, willow, birch, maple, sumac, and alder. They’ll also eat the needles of conifers, including cedar, hemlock, fir, and spruce. Unlike true rabbits, varying hares do not take refuge in underground burrows when pressured. They hide during daylight in shallow depressions or “forms” in the snow, concealed by overhead blowdowns and the low-lying boughs of young evergreen trees.

Remaining motionless is their best defense, but when startled, snowshoes rely on their long, powerful hind legs to run away from danger. The key is to move slowly and take drawn-out pauses, which unnerves nearby rabbits into flight, and to keep your shotgun ready. In this respect it’s very much like hunting cottontails.

Look for snowshoes on cold, clear days on south-facing slopes, where they like to nap in the sun on the edge of thick cover. Snowshoes prefer conifer stands with dense undergrowth, but you can find them in a variety of forests with brushy ground cover. Willow thickets, alder bottoms, cedar swamps, spruce-fir bogs, and areas where recent logging has created young, dense stands of mixed soft-woods and hardwoods provide ideal habitat.

Whenever possible, follow established rabbit “runways.” In good cover, on snow that is several days old, these will be readily apparent: beaten-down surfaces, about 6 to 8 inches wide, with snow compacted up to a couple of inches deep. Carefully scan ahead for a rabbit hiding in its form. Watch for their black-tipped ears and large black eyes, and the rest of the rabbit will take shape.

Toward the high end of the snowshoe’s roughly 10-year population cycle, dogless hunting can be remarkably successful in good cover if for no other reason than there can be so many rabbits to bump into. Female snowshoes produce up to five litters a year, and when conditions are favorable, their numbers can swell to several thousand per square mile.

Another solo tactic is tracking snowshoes to their forms after a light overnight snowfall. Ironically, this is best done in marginal rabbit habitat, which provides fewer tracks to sort through and less cover for rabbits to hide in.

Read Next: March of the Snowshoes: 4 Days of the Craziest Rabbit Hunting in the World

The Right Guns and Loads for Hunting Snowshoes

Shotguns are the choice of gun for hares, and almost any smoothbore will do. Experienced snowshoe hunters prefer repeaters, though, because often it’s the third shot that connects. Slide actions, which won’t freeze in even the bitterest temperatures, are more reliable here than semi autos.

Snowshoes are about one and a half times the size of an eastern cottontail, averaging around 3½ pounds. They are not particularly hard to kill (hitting them, of course, is a different matter). Just about any field load stoked with No. 5 through 7½ shot is effective. Sub-gauge guns, especially 20-gauges, are generally favored for their light weight. Experienced trackers will use scoped .22-caliber rifles, or even .22 handguns with iron sights.

How to Cook a Snowshoe Hare

Snowshoes tend to be tougher and have a stronger flavor than cottontail rabbits, especially those taken in regions where conifer needles form a large part of their diet. For this reason, many hunters parboil the meat in salted water before adding it to stews, casseroles, and other slow-cooking dishes. But I’ve always found that appropriate: At the end of a cold winter’s day spent chasing the big rabbits, while the rest of the world was trapped inside, the experience of sitting down to a hot bowl of hasenpfeffer should be savored.

Where to Find Snowshoe Hares

Snowshoes are found throughout Canada and across the northern United States from New England to the Pacific Northwest and south into West Virginia, Colorado, and California. They are legal game in 23 states. Hunting seasons typically extend into March; in some states, there is no closed season.

Pick The Right Footwear for Hunting in Deep Snow

Much of the time, white rabbits can be hunted with nothing more than rubber-bottomed pac boots and gaiters. But when snow depths exceed 12 inches, snowshoes become essential.

Stay away from extremely short, wide designs known as bearpaws (which are great in brush but cumbersome on the trail), as well as extremely long, narrow models, called Alaskans (which are great on the trail but unwieldy in brush). Better choices are Michigans, also called Hurons or beavertails, which represent a middle ground between the two extremes. My personal favorite is another hybrid design, the Green Mountain bearpaw, which offers a mix of easy use and high flotation in all but the deepest, lightest snow. The Iverson Snowshoe Co. makes both types.