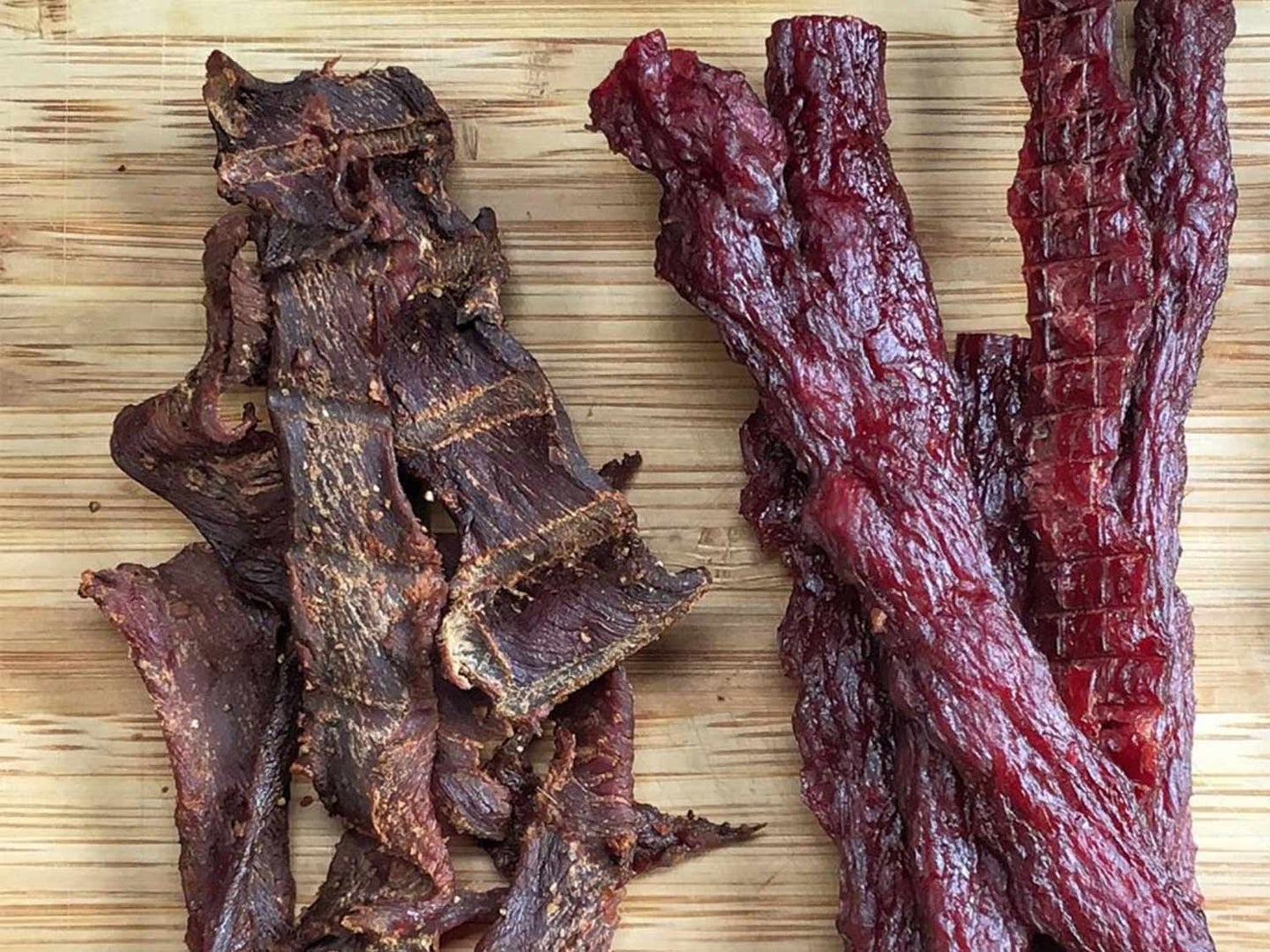 Lean cuts (left) are easy to work with, but ground meat can be made into snack sticks (right). Jeremiah Doughty
SHARE

For as long as there have been hunters, there’s been jerky—at least as best we can tell. Ötzi the Iceman—a 5,300-year-old hunter found frozen solid in the Italian Alps—had a last meal of dried ibex and red deer meat. Archeologists have found sun-dried jerky in ancient Egyptian tombs. The Incas pounded Alpaca meat flat and sun-dried it, too. Their word for this delicacy, “Ch’arki” which translates to “dried meat,” is where most experts think the English word “jerky” comes from.

Nearly any piece of meat can be dried and eaten. But dehydrating meat intensifies and concentrates flavors. A questionable piece of inner loin that got a little gut juice on it during the field dressing process will only get more stinky when dried. So, the freshness and overall quality of meat you select for making jerky are paramount.

Fat is problematic. Beef or pork fat can add oodles of delicious flavor. Deer fat, not so much. Fat also has a higher water content than muscle meat, so fatty cuts take longer to dry and often dry out unevenly. Fat also spoils, so any jerky with fat in the mix will spoil sooner than one made with lean-meat.

Lean cuts from wild game with little intermuscular fat work best for home-made jerky. Large cuts that can be sliced into long, thin strips work best, too. Backstrap makes first-rate jerky with little work involved, save the slicing. Hindquarter cuts of beef are the typical go-to place for most high-end commercial jerky, so the large round roasts of deer, elk, or moose hindquarters work great, too.

2. Cut or Grind the Meat

Muscle meat has grain, and individual muscle fibers run together in a more-or-less uniform striation—like a straight-grain piece of hardwood. If you cut against the grain, or perpendicular to these fibers, the jerky will generally be softer and easier to chew. If you cut with the grain, it will be tougher, stringy jerky. Nine times out of ten, against the grain is a better jerky cut.

Most experts recommend cutting jerky meat into strips ⅛ to ¼ inch thick. Chef and jerky fanatic Jeremiah Doughty, of fromfieldtoplate.com, says the thinner the better. He recommends home butchers cut their strips about as thick as the spine on their kitchen knife, and no thicker than ⅛-inch. Paper-thin jerky with bold spices has a definite high-class feel. When done right, thin-sliced jerky almost melts in your mouth.

To make cutting easier, put the piece of meat in the freezer for an hour or two. In a semi-frozen state, it’s easier to cut precisely.

If you don’t have large premium cuts of meat to trim down, you can make ground-meat jerky. Remove all the silver skin and fat from the meat, and run it through a meat grinder through the smallest grinder plate as if you’re making burger—twice. Spiced and piped with a jerky gun, it’s possible to make Slim-Jim-like snack sticks that are compulsively good. Ground meat jerky is also a good use of the whole-meat trimmings that inevitably come from butchering a deer at home.

3. Use One of the Three Most Effective Drying Methods

There are many ways to dry jerky, but chefs and sportsmen alike tend to do one of three: oven drying, dehydrator drying, or smoking.

Oven drying is perhaps the simplest way to make jerky. All you have to do is lay your jerky strips on a rack and put them in your home oven at its lowest setting. If that temperature is above 160 degrees, prop the oven door open with a golf ball or a pencil to let some heat escape.

With a dehydrator, the same principle is at work. A dehydrator is basically a low-heat vented electric oven with a fan to keep air flowing. Rack the meat strips and set the dehydrator between 135 and 165 degrees. The USDA recommends heating meat to an internal temperature of 160 degrees before or after dehydrating at lower temps, as that’s the temperature at which Salmonella and E. Coli die off.

Read Next: Best Dehydrators for Jerky

Smoking jerky will add even more flavor. Modern pellet smokers make this very easy. Most smoker grills have a “low smoke” or “keep warm” setting that will keep temps around 165-degrees. Some jerky nuts, like Dougherty, will start the cook with a pan of ice on the grill and the jerky meat on shelves over the ice. This cools the smoke and gives it much more time to flavor the meat. Although, with an ice tray, it takes the meat much longer to hit the safe-to-eat 160-degrees mark.

It takes about two or three hours for ¼-inch strips of jerky to dry in an oven, four hours in a dehydrator or smoker without ice, and 10 or more hours on a smoker with an ice tray on the grill.

The hardest part of a jerky cook is knowing when it’s done. “You can’t cook jerky by time,” Doughty says. “You have to gauge it by feel. When you pick a piece off the rack, it should be firm enough to not flop over, but soft enough to tear instead of break.”

As soon as the jerky feels right, it’s time to cool it down and stop the drying process. To do this, bag it immediately in a Ziploc and run it under cold water before moving to the fridge. This prevents jerky with perfect texture right off the smoker from drying out the next day.

Once cool, jerky should be kept in a secure container, but not airtight. Airtight conditions make mold. You’ll also want to space out the individual jerky pieces and avoid packing them together in a tight wad—which can also make mold. If you expect it will take more than a week to eat it all up, keep the container in the fridge. Any longer than two weeks in the fridge, freeze it. Jerky can keep for months in a freezer—not that it’ll ever take that long to eat it all.

The Best Tools for Making Jerky at Home

Traeger invented the pellet smoker and all of that institutional knowledge has been distilled down to their pro-series WiFi grills. The 575, which I’ve been running several times a week for the last six months, has 575 square inches of cooking space. (For jerky smoking that can effectively be quadrupled with stainless steel smoker racks, see below.) The Traeger does two important things very well: One, it burns a colder smoke compared to most other pellet smokers out there. With the Keep Warm setting, it’ll hold at 165 degrees, or in my experience, a real-world temperature closer to 150 degrees. These low temps are ideal for a long, slow, smoke-rich jerky. Second, the grill can run hot, too, with a real-world temp around 425 to 450 degrees at the highest setting. This is enough to make a killer steak without needing to also sear on a hotter traditional grill or stove. Finally, the WiFi system: Where have you been all my life? I never thought getting a text message from my grill would be such a life-changer. It is. Because of it, I overcook way less stuff with the Traeger.

If you’re going to make jerky in a smoker in any real quantity, you need a rack system. One rack is enough for a typical 2-pound batch of jerky. Any more and you’ll want two. Stacked on top of each other, they provide four shelves for of meat smoking goodness that will satisfy you big-batch jerky chefs.

Never slice whole-meat jerky with a knife again. I avoided buying a slicer for the longest time, mainly because of the price, but now that I’m running this commercial-grade Weston, I’ll never go back. Jerky cuts are perfect and uniform, which translates to a more even piece-to-piece cook in the smoker and dehydrator. That is, when one piece is ready, most are ready, which is way better in my estimation than checking the smoker 40 times in an afternoon. Tangentially related side note: the slicer has changed our next-day sandwich game. Whatever big cut of meat we eat for dinner—brisket, turkey, backstrap—the leftovers get sliced into deli-thin sandwich meat for the next day’s lunch. My son’s teachers have sent notes home asking where we get our cold cuts.

This is the best meat grinder I’ve ever used. A new company, appropriately named MEAT!, is bringing commercial-grade butchering tools to the consumer market, aimed directly at American hunters. Well, this heavy-duty 1.5 horsepower grinder delivers the goods, and can rip through 2 pounds of cubed-up venison faster than you can read this paragraph. The two-inch port is nice, as you don’t need to cut the meat as small as with most consumer-sized grinders. And there’s so much power here, I’ve yet to take it apart and find un-grinded meat jammed up in the spindle. It literally sucks in whole-muscle cuts and spits out ground-up goodness. With an all-stainless construction and 70 lbs. of weight, this grinder is a beast. It’s exactly what you need at deer camp, or in your butchering room.

The go-to food dehydrator for the masses, Excalibur was the only serious option for many, many years. We’ve run this 3926TB (the TB means it has a timer with automatic shutoff, opposed to similar models that only have a heat control) for almost 10 years. It hasn’t let us down yet. True, you don’t get the smoke flavor, but the ease-of-use of a dehydrator and easy clean-up comes in handy. The controls on this model are analog, which I like very much. Touch screens feel precise, sure, but I can’t think of one touch-screen device I’ve owned for 10 years that hasn’t burnt out yet. Yes, you can find a good dehydrator for much less money, but with Excalibur, you’re buying trouble-free years of jerky production.

Currently, there are no less than three jerky guns in my house. This one is the best. These are not sophisticated tools or difficult to operate. (Step one, fill with meat. Step two, squeeze trigger.) Think of a jerky gun like a caulk gun for meat. Yet they break. And break. And break. All the time. Well, the Weston is the least cheap of any jerky gun I’ve ever tried and after many months of hard service, including a four-year-old tossing it around the kitchen, it has not broken. Good job, Weston.