What’s the Secret to Getting Your First Squirrel? Time. 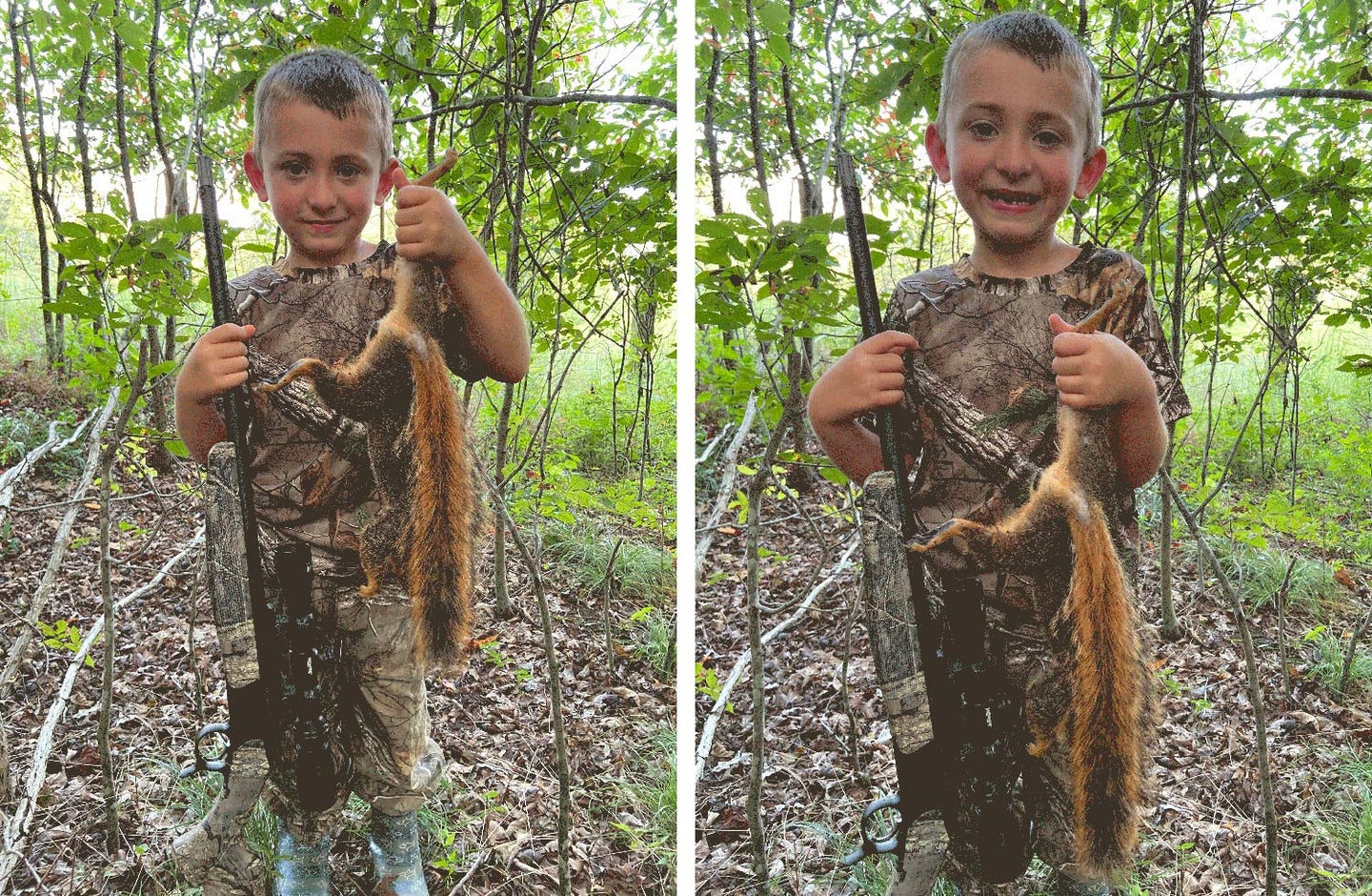 Squirrels rarely leave the treetops to forage on the ground in August, but this one is scampering down the side of the hickory trunk, right toward the forest floor. My son, Anse, and I are sitting 25 yards away, him between my knees with his Savage Rascal .22 pointed ahead.

He’s 6 years old, and he woke me up twice during the night, too excited to sleep. It’s opening morning of the 2020 squirrel season. Anse has been tagging along with me to the woods since he was 3. He doesn’t remember the early trips; he simply knows that he’s always gone squirrel hunting and that this year, he gets to shoot.

I think he can kill a squirrel with his .22, since there’s been plenty of time to practice. I put a 4x scope on it earlier in the summer, and from 30 yards with a rest he can explode a can of soda every time. Still, finding a moving squirrel in the green canopy is a challenge for adult hunters, and it can seem insurmountable at times for a kid. All we can do is try, but I know Anse’s best chance would be from a lucky opportunity at a squirrel on the ground.

And here we are, opening day. And it’s about to happen.

It’s a stud of a fox squirrel, too, with a sweeping burnt-orange tail. We see maybe one fox for every 10 gray squirrels around here. They’re about twice the size of a gray squirrel—impressive and just rare enough to represent the ultimate trophy to a first grader. I don’t say anything, so as to keep Anse calm. But there’s no hiding it, because the kid recognizes exactly what he’s looking at.

“It’s a big old fox squirrel!” he whispers, a little louder than he should. But the squirrel doesn’t notice. It’s carrying a hickory nut in its mouth, and it hops onto a downed log on the ground, slinks across it with a cat-like gait, and curls into a ball to work on the nut. You couldn’t ask for a prettier shot opportunity, as if someone had written it on a sheet of paper and slipped it to me with the instructions: Sit right here.

“Take your time, buddy,” I whisper. My own breathing is heavier than his. “Put it right on him and squeeze the trigger slow.”

I watch as the tiny rifle barrel makes small circles, and then stills. At the crack, a white scar appears in the log just underneath the squirrel. The critter drops the hickory nut, puzzled for a moment, and then leaps to the trunk of the nearest tree. I work the bolt on the Rascal, and fish another hollowpoint from my pocket—but it’s too late. The squirrel jumps to the ground and is out of sight by the time I reload.

Anse and I stand up, sharing that moment in the woods when the silence has been shattered by a gunshot, without anything to show for it. If you could only dial time back 10 seconds.

Anse doesn’t say much about it until bedtime that night. But after prayers and a book, he breaks into tears, and tells Michelle that he’d had best chance ever on the biggest fox squirrel he’d ever seen, that he’d missed, and now he’d probably never kill one, ever.

In a crazy year full of real worry, missing a fox squirrel is keeping my boy up at night. My heart hurts for him. But really, could I ask for anything else out of life?

The Gift of Time During a Pandemic

There are just a few days left in 2020 as I write this. For the first time in a decade, hunting license sales have increased. Gun and ammunition makers are having record years. It’s hard to find camo on store shelves. I’ve never seen so many hunters on public land in Kentucky and Tennessee, where I hunt most, as I have this season. I don’t know if this surge in hunting interest is a trend that will last. I do know that many of us in the “outdoor industry” have done a lot of handwringing in recent years over the best way to recruit and mentor new hunters, and there’ve been some great programs as a result.

But if hunting with my son in 2020 has taught me anything, it’s that in the effort to recruit and retain new hunters, we sometimes overlook the single most important piece of the mentorship puzzle.

For Anse and me, that time has been irreplaceable. My job description is different than most—and not much different in a normal year than it’s been this year. I set my own schedule, and everything about my job is directly tied to hunting. I have more prime land, public and private, within an hour’s drive than I can hunt in a season.

But even with that, I can say with absolute confidence that I wouldn’t have taken Anse hunting nearly as much, had it been a normal year. Desk deadlines and work travel whittle away at my schedule. And even as a firstgrader, Anse has school obligations and birthday parties and play dates—and he’s not even into sports yet. I have buddies whose kids love to hunt, but they don’t go at all anymore because of daily practices and weekend ball games.

And then there’s this, which I’m sure is truer for many of us than we’d like to admit: Filling my own buck tag is a hell of a lot easier when I’m alone than with a chatty little boy in tow, who gets bored and cold pretty fast. But in 2020, Anse’s school schedule has been on-again, off-again. Parties and play dates have been cancelled. Meanwhile, I’ve traveled less this year than I have in the past 15 years. I’d have plenty of time to hunt for myself.

And so, when the kid has asked to go hunting—and he’s asked a bunch—I can’t give him a single answer that’s not selfish. So I put my own shit aside, and I take him.

A Hunter’s Second Chance at His First Squirrel

I start shopping for a .410 for Anse, after the Great Miss of Opening Day. You could say I’m spoiling the kid, and if so, guilty as charged. But I’ve never bought him a video game, and I’ve suffered his type of heartache before, with a scene like that playing on repeat in my head.

My job as a mentor, the way I see it, is to make sure he’s having fun—and another miss like that might tip the scales the wrong way. So one afternoon I surprise the kid with a CVA Scout .410, complete with a shotgun scope and turkey tube—perfect for shooting at stationary squirrels.

We step out in the yard with a box of Daisy Shatterblast clay targets, which are each the size of a squirrel’s head. Once Anse realizes there’s no recoil, he shoots up an entire box of 2 ½-inch light loads, shattering discs with every pull of the trigger. He’ll be loaded with 3-inch Magnum 6s when we hunt. He’ll never feel the kick in the heat of the moment, and I’m confident his fortune is about to turn.

The next evening is breezy, but Anse wants to go. I drive to a 14-acre woodlot down the road from the house, where I know the trees are short and the canopy is fairly open. Still, wind makes early-season squirrel hunting especially tough, and though we can hear hickory cuttings falling to the forest floor, we’re having a hard time seeing squirrels. After an hour, Anse starts getting frustrated, and when he gets frustrated, he pouts and gets loud. He knows I’ll tolerate that for a minute at best.

“We can do one of two things,” I tell him sternly but quietly. “Go home right now, or hunt until dark, quietly. But staying here and whining all afternoon isn’t an option. What’ll it be?”

He looks back toward the truck to consider things, and then ahead to the next ridge. “Let’s go up there and sit down,” he says.

It’s coming on 6 p.m., and the wind settles. We’re sneaking our way up a deer path when a pignut bounces into the ground ahead of us. The source tree is a small one, maybe just 10 inches around, but there’s a squirrel in it. I see a flash of orange and shaking leaves. “Squirrel right there,” I whisper. We watch, crouch low, and tiptoe closer. The squirrel’s teeth scrape against the hickory hull, a sound that can be replicated perfectly by scraping together the rims of two quarters. We take a seat just within gun range of the small pignut, and wait. The squirrel stretches into view again, and Anse recognizes it for what it is.

I have the hammer cocked once on the squirrel, and Anse can see him in the scope—but only his tail. “We need to wait for a good shot at his head,” I say.

The fox squirrel works furiously on the ripe mast, and I smile at the dozen or more chances that I could kill him myself. Still, we have an hour of light left, and there’s no rush. Suddenly, the squirrel starts descending the tree, as if he’s gotten an urgent call, and I think we’re about to get a shot at him on the ground. Anse settles his cheek into the stock of the shotgun.

But the squirrel instead leaps to the limbs of the tree we’re sitting under ourselves, and he crosses right above us, no more than 15 yards high. “Don’t move,” I whisper. “He doesn’t see us.”

I can hear toenails against bark behind us, and the thrash of green limbs as the squirrel jumps to yet the next tree. Then, he’s cutting again. We twist slowly around, and there he is, curled into a ball on the low limb of a maple in plain view, his tail hanging vertically down. He’s 20 yards away. Anse says, “I’ve got the scope right on his head.” I cock the hammer, and help him support the fore-end of the gun. After that, my job is to shut my mouth and watch.

The .410 pops, and the squirrel hits the ground with a thud, dead right there from a dozen No. 6 pellets placed perfectly. Before I can pop the smoking hull out of the gun, Anse is hoisting the critter and commenting on its impressive set of balls. The kid’s smile betrays a missing front tooth and a pure joy polluted by nothing else in the world—and damned if we don’t both cry a little. He asks to get the squirrel mounted. I tell him I’d pay a taxidermist triple on the spot, and he doesn’t understand, and so I clarify with a simple “yes.”

We share that moment in the woods, when the silence has been broken by a gunshot and there’s a prize to show for it, both game in hand and the story we’ll have about the year 2020.