I Love Hunting in Texas. Why Don’t You?

The Lone Star State’s hunting culture is unmatched. Plus, it’s a place of excess and fun 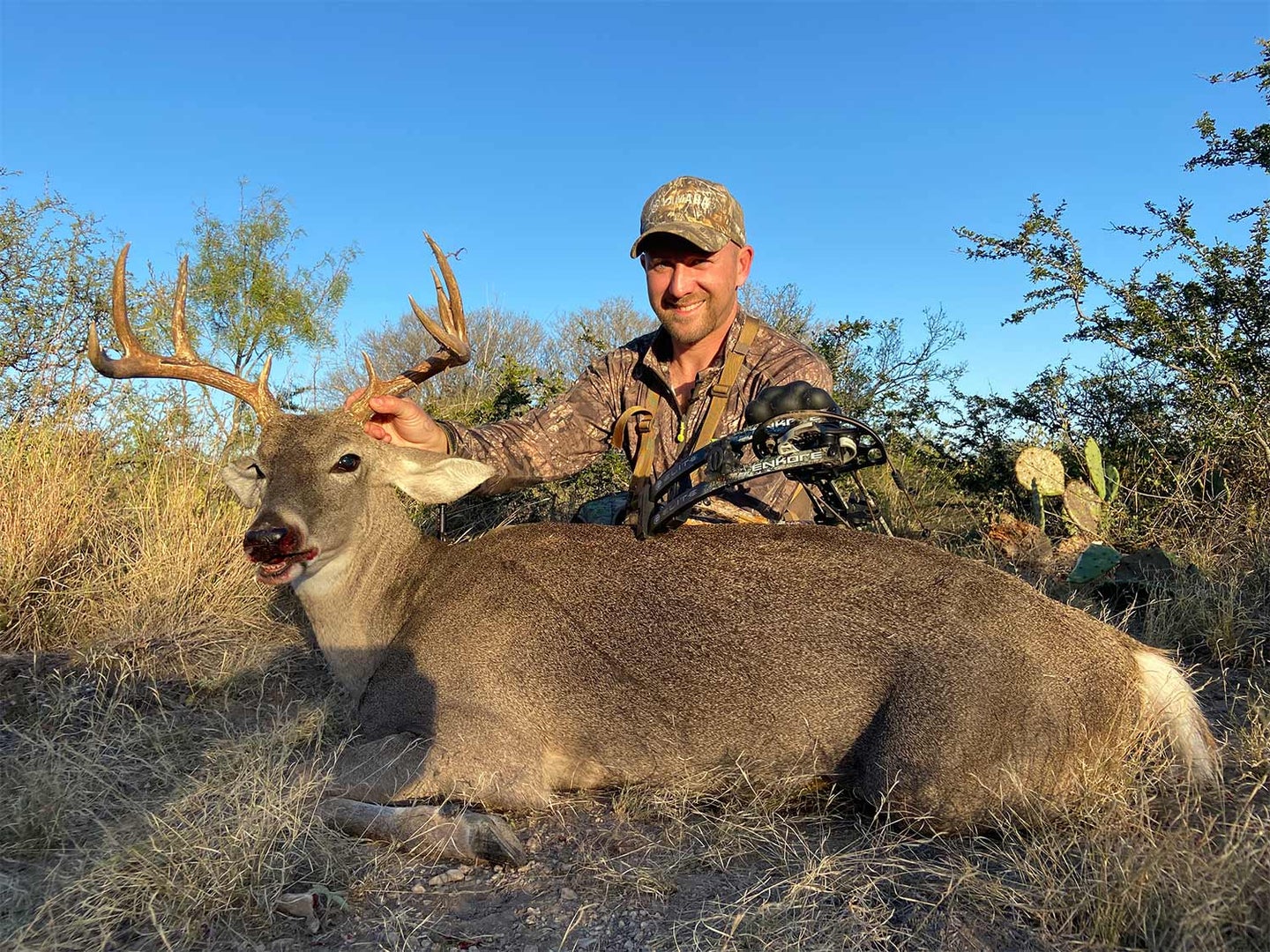 The author took this buck in South Texas. Will Brantley
SHARE

I’m sitting in a tripod stand in a copse of live oaks aptly named Pig Ridge. It’s a fine-looking spot for swine, with a dry creek bed to the rear, and a tangle of hostile Texas brush ahead. An hour before dark, the black forms of two boars—perhaps 100 pounds apiece—flash through the thicket. We’ve scattered a gallon-size Ziploc bag’s worth of corn on the ground within bow range, and after some positioning and grunting about, one of the hogs makes the fatal mistake of quartering slightly away from me. I settle my 20-yard pin and let fly, and that pig dies within sight.

The second hog darts into the cover but soon returns, sampling the fringes of the corn pile for seconds at a time before disappearing again into the brush. I draw and let my bow down half a dozen times. Finally, with light fading, the pig circles downwind and gives me a clear view of its shoulder. I’m already drawn and anchored when it does, and I let a second arrow go.

The pig falls dead, smack in the middle of a tangle of briars that have somehow all grown precisely eyeball-high. I decide it’s as easy to cut him up where he lays as it is to drag him through that mess. Michael Wersig, who’s filming the hunt for an episode of Yamaha Whitetail Diaries, holds a light while I cut and peel away a panel of bristly hair and fat, both to render the pork underneath and to retrieve my broadhead, stuck in the off-side shoulder. There’s a big week ahead, and I know I’ll need that ferule again.

“I’ll tell you one thing,” I say to Wersig as I blood from my hands with a wet wipe. “I love hunting Texas.”

There’s No Shame in Loving to Hunt Texas

Of course, you have to be careful admitting to such a thing. Some scoff at Texas hunting, and even regard it with near contempt. You don’t generally go to Texas to hike the backcountry, sleep in a tent, and eat food prepared on a jet-boil stove. You rest at the ranch house, park a UTV a hundred yards from the stand, and finish the day with a feast of beer and barbecue and good beans. And above all, you go to Texas to see plenty of game and do some shooting. The critters there come to corn, and, by God, there are a lot of them. Some are introduced exotics—escaped and free-range that you can hunt just about year-round with whatever you want to hunt them with, day or night. Some say it’s not real hunting at all, the way it’s done down there. There’s too much bait and too many animals and too much private land. It’s not the challenge that a DIY public hunt is.

That last part is true—but the rest of it is not. What is true is that there are more licensed hunters in Texas than anywhere else in the country. They shoot more whitetails than anyone else, and they make a noble effort at the turkey and waterfowl records, too. As a percentage of the total land mass, Texas doesn’t have a lot of public ground—but it’s a big state, and there are still more than a million acres of public ground. I’ve had some fine public-draw waterfowl hunting in Texas.

Texas hunting is a subculture all its own, sculpted by a people with a long and glorious tradition of not giving a damn what others think of them. And the truth of it is, I’ve done a lot of the backcountry DIY stuff. I enjoy it. But I like sitting over a feeder in Texas with a quiver full of arrows a little better.

Texas Is a Deer Hunter’s Heaven

From the Panhandle to the Hill Country, East Texas to West, down to the Coastal Plains, I’ve enjoyed hunts in many of the state’s distinct regions. On this one, I’m at Wade Middleton’s lease in southwest Texas. Middleton, the host of Whitetail Diaries, has the look of a guy who’d as soon be outside. He wears a visor, surrounding a wind-blown crown of hair, as if he’s just stepped out of a bass boat. He tells me they try to shoot 4 ½-year-old bucks on the place, but that sometimes they make exceptions.

“Actually, we kill a lot of 3 ½-year-old deer, too,” he says. Then he smiles. “You go ahead and shoot one that gets you excited.”

This is my kind of place, and I went to Pig Ridge the first evening upon Wade’s recommendation. I think he wanted to get the twitch out of my trigger finger. “Where you’re going in the morning, it’s probably best to hold off on pigs and stuff,” he says, “because there are some big bucks in there.”

After dinner, I replace some broadhead blades. Wade’s wife, Angel, has placed a massive candy bowl of assorted airline bottles of liquor on the snack table in camp, and labeled them “Flu Shots.” I have one myself, it being flu season and all, and go right to bed, visions of short blood trails in mind.

The next morning, Kevin Giesecke is filming me, and we settle into a pair of treestands in a meandering creek drainage. I can hear pigs grunting in the dark, and by daybreak, they’re 15 yards away, testing my resolve.

“Wade said we should wait on a buck in here,” I whisper to Kevin. He nods in agreement. But then a flock of turkeys begins to tree-yelp and soon the woods around us are alive with a massive bachelor group of gobblers. My license is good for a fall turkey, too.

“Kevin, I think I’m going to shoot a gobbler if I can, and then one of those pigs, too, if it’s still around,” I whisper. “We’ve got plenty of time to see a deer.” Kevin smiles, recording.

But it’s not meant to be. I draw my bow on a gobbler that busts me, and after they scatter, the pigs disappear, too. We watch axis deer funnel through the drainage by the dozen, but no whitetails.

That evening, Kevin and I strike out for a new spot. It’s a long ride toward a ground blind set in the bowl of a rocky outcrop. The mesa on top is an area where, Wade says, they typically set up and rifle hunt. “You can see a lot of country, and we’ve killed some good bucks there,” he says, “but we’ve never gotten down in there and mixed it up with a bow.” Since there are no trees big enough for a stand, we climb into a pop-up ground blind, set 50 yards from a tripod feeder.

The first whitetail to appear looks to be a mature buck, with a sagging back and belly, but a small rack. Texas is noted for numerous whitetail subspecies, some with dramatically differing characteristics. Where we’re hunting could be described as the transition zone between the Hill Country and South Texas Plains, on the edge of the Edwards Plateau. The whitetails (mostly the Texanus subspecies) here are physically small, with a good buck being about the same body size as a big Midwestern doe. I personally find them difficult to field judge. They sport a gray, grizzled coat and frequently have dark “chocolate” antlers. Rut timing varies widely across the state. It’s late November when we’re hunting—post rut at home in Kentucky—but Wade tells me the big show here gets going in early December. Run-and-gun rattling with a revolver is his favorite way to hunt, but I’m here a little early for that.

Still, there’s plenty of opportunity. Looking that first buck over, I decide to let him go, and he soon melts into the brush. I figure we have a long sit ahead so I’m reading a book, with my bow laying on the ground next to me, when I hear brush crack behind the blind—maybe two hours into the sit. Kevin is dozing behind his camera tripod. I glance up and see a doe trot past the blind window, close enough to touch. The frame of a good 10-pointer pops into view on the same trail, right behind her. I seem to hold my breath as he’s just 5 yards away, but he moves out to 25 and stops. I whisper to Kevin: “There’s a shooter buck right in front of us.”

I look the deer over for a moment and note some dried velvet stuck to his tines. He’s not a huge buck but certainly a good representative, and big enough for me. I pull my bow to my lap, quietly as I can, clip to my D-loop, and wait for an angle. I take a sharp quartering-away shot, and the deer falls dead within sight.

Going Out with a Gobbler

That night, I’m thinking about cooler space for the drive home—what with venison and pork to keep iced down. Wade reminds me that I have a turkey tag, and that he has a blind set in the woods, where a flock of gobblers has been passing through most mornings. “You want to go out and try to kill a bird before you head home?” he asks. It’s as if he represents the entire state of Texas, threatening me with a good time. I tell him hell yes, in no uncertain terms, that I’d like to go turkey hunting too.

The following afternoon, I load the truck with coolers of meat—including a fresh turkey breast—along with the cleaned skull of my 10-pointer and the fan, spurs, and beard of a Rio Grande gobbler. I purposely drive backroads, halfway across the state until it’s too dark to see, admiring all the deer visible on the shoulders of the road. Try as I might, I can’t find much of anything not to like about Texas.

With the Yamaha crew there at camp, I was able to spend time driving a number of new side-by-sides, but most of my hunting transportation for the week was via a new Wolverine X4. This class of vehicle is one I’ve been using extensively over the past year. Yamaha classifies their SXSs in one of three categories: Pure Sport, Recreation, and Utility. Most hunters think of the traditional dump-bed utility vehicle with bench seating as the quintessential SXS, and for day-in, day-out use on the farm, that configuration is still probably best.

But vehicles like the Wolverine are a hybrid—still with a generous dump bed and cargo room, but with features borrowed from the Sport vehicles, such as bucket-style seats, better suspension, and above all, more power. Where the base model Viking—Yamaha’s flagship utility vehicle—has a 686cc engine, the Wolverine X2 and X4 (I drove the latter) start with an 847cc engine. You can step up to the RMAX models for a 1000cc. The X4 retails for $18,199, which is a good bit more than a base model Viking, but a little less than the competing vehicles in that same “hybrid” category.

These are machines still capable of doing the work needed, but they’re more fun to drive and better equipped for serious off-roading and trail riding. Those aren’t bad things for hunters. The X4 has dual rear seats that slide forward for expanded bed room. Kevin and I loaded my buck, along with my bow, pack, and his camera gear, and hauled it all back to camp, where a plate of barbecue and good beans was waiting. —W.B.