A quiet walk through the snowy grouse woods can turn into a heart-stopping thrill just like that. Here's how to make it happen 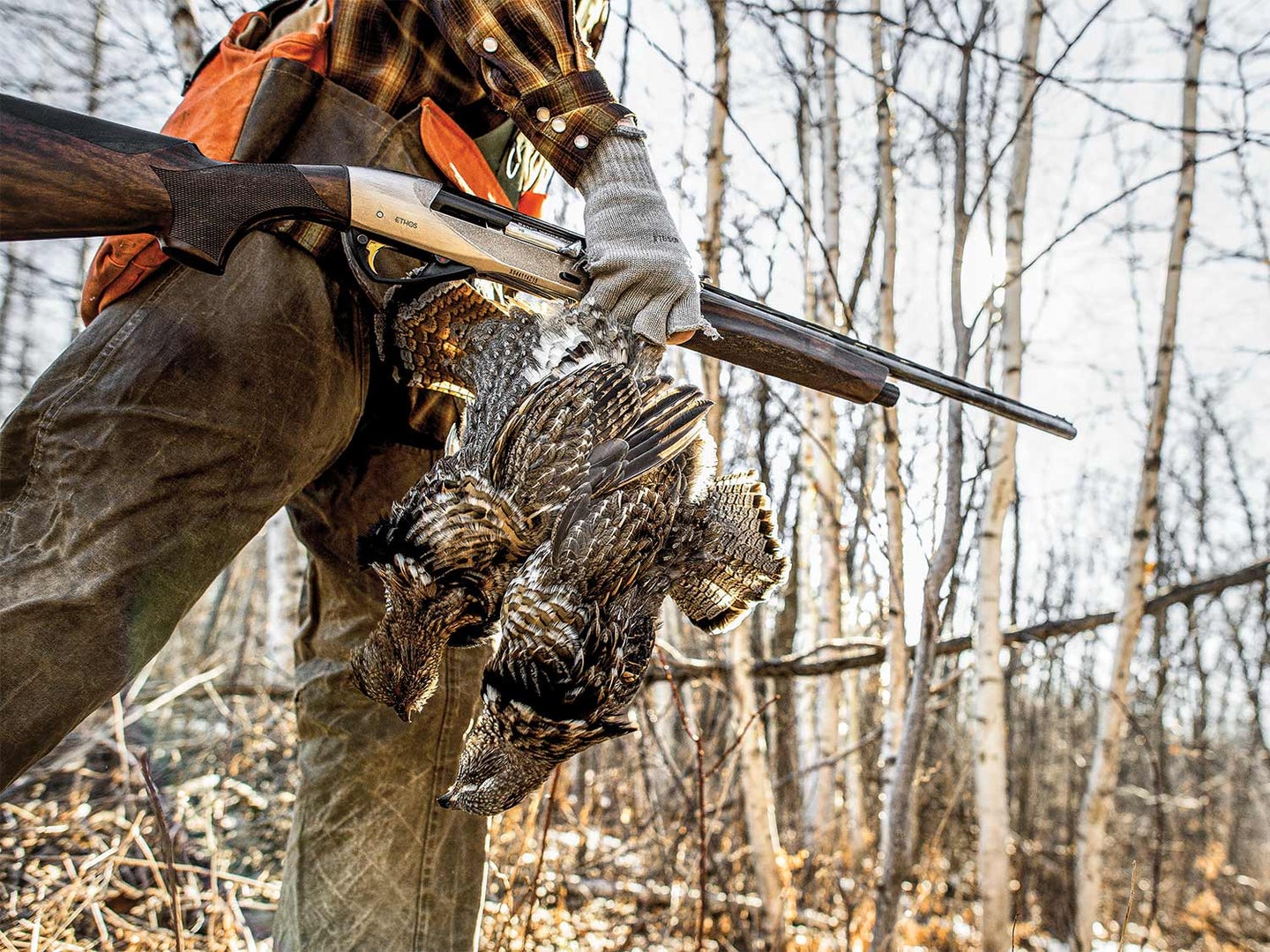 Stepping into the middle of a tightly wadded covey of quail will do things to your heart that would concern a cardiologist. But when you’re hunting late-season grouse and a bird erupts from beneath a mantle of unblemished snow, the percussion all but drops you in your tracks. You see the snow begin to move, and you think, What the… Then the world explodes. At this point, you’re faced with two problems: The first is pulling yourself together so you can bring your shotgun into play and function as a hunter. The second is finding your target through the dreamlike crystal cloud hanging in the air between you and the grouse—which is exiting the scene at an alarming rate.

That’s pretty much how things went down on a hunt in Wisconsin last winter. I’d seen a few meandering tracks in the fresh powder, and my English setter, Tina, had gotten birdy a time or two. But the makers of those tracks seemed to have vanished into the winter woods. At last, we came to a little clearing. I turned to whistle for Tina, took a wading step through the snow, and had the sensation that I’d detonated a land mine. Now came the hard part.

How to Hunt Late-Season Grouse

Late-season grouse hunting is a feast-​or-­famine proposition. A grouse that’s lived to see December is a professional survivor. Tested by predators of ­every stripe, its nerves are cocked against a hair ­trigger. High alert is its ­default setting; at the slightest hint of danger, a grouse that feels vulnerable rockets for the nearest concealing cover. If this means diving headlong into the snow, so be it.

Grouse spend more time in trees in winter than they do earlier in the season. I’d suggest that you need to be prepared for this, but because no one’s that cool-headed, I’ll just say that you should be aware of the possibility.

The variable conditions typical of winter hunting complicate the equation as well. You might encounter deep snow, but you might as easily have bare, hard-​­frozen ground; one day might be bitter cold, another balmy. Ironically, a warm day without snow cover is the most challenging scenario. The walking is pleasant, but the birds are at their wild-flushing worst. This is the time to go to tighter chokes—­Modified in a single-barrel gun, IC/IM in a double—and to stick with No. 71⁄2 shot or, if you can find them, No. 7s.

When the powder is piled high and the thermometer plunges, on the other hand, surprisingly close flushes are the order of the day. Plus, once the swamps freeze, you can sometimes get to islands of cover that are inaccessible earlier in the season and find birds that may not have been shot at.

The spots where I’ve had consistent success on winter grouse all had a diversity of cover: a mix of classic brushy popple, conifers of different sizes, low-lying swamp and marsh, and grassy clearings. A south-facing slope is another plus, as is the presence of food sources other than the aspen buds, which are the staple winter ration of grouse. My Elhew pointer, Traveler, once pointed a December grouse that was feeding on ­delicate maiden­hair ferns growing where a cluster of tiny springs kept the ground clear of snow. To stumble on that patch of green in the middle of the winter-white forest seemed almost magical.

Read Next: The 10 Best Gun Dogs for Ruffed Grouse Hunting

I got lucky that grouse exploded from a snow roost. Instead of using that glittering cloud of flakes as a smokescreen, the grouse made a hard left turn and came into such clear view, I could damn near count the feathers in its rusty-brown fan. It was making for the apple tree, but I overtook it with the muzzles of my 16-​gauge Fox, pulled the forward trigger, and folded the bird cleanly. Another cloud now hung in the wintry stillness, this one composed of feathers.

Related: How to Hunt Grouse—Everything You Need to Know

Some tight-lipped late-season grouse hunters know a secret that you can boil down to one word: corn. In areas where traditional woodland grouse range and ag lands quilt together, grouse, while not grain eaters by nature, will slip out of the thick stuff and fill their crops in the stubble. Not only can cornfield edges become winter grouse hotspots, they can also provide exciting mixed-bag shooting for bonus birds such as pheasants and Huns.

Bonus Tip #2: How to Hunt Late-Season Grouse by the Sun

Winter grouse spend a good deal of time in thick conifer cover that offers protection from cold winds and typically less snow at ground level. But there are certain days when you probably won’t find them there, and what makes all the difference is the sun. When winds are low and the sun is shining brightly, winter grouse move to open cover to feed and take full advantage of the sun’s warming rays.

All of this makes for a good rule of thumb when hunting late-season grouse. When the sun is shining, hunt the comparatively open dogwood and viburnum thickets, the groves of young birch and aspen, and the overgrown orchards. When clouds roll in or winds whip up, head for conifers. And be ready for grouse to rocket from the treetops. —Dave Hurteau