How to Fish for Largemouth Bass with Jerkbaits 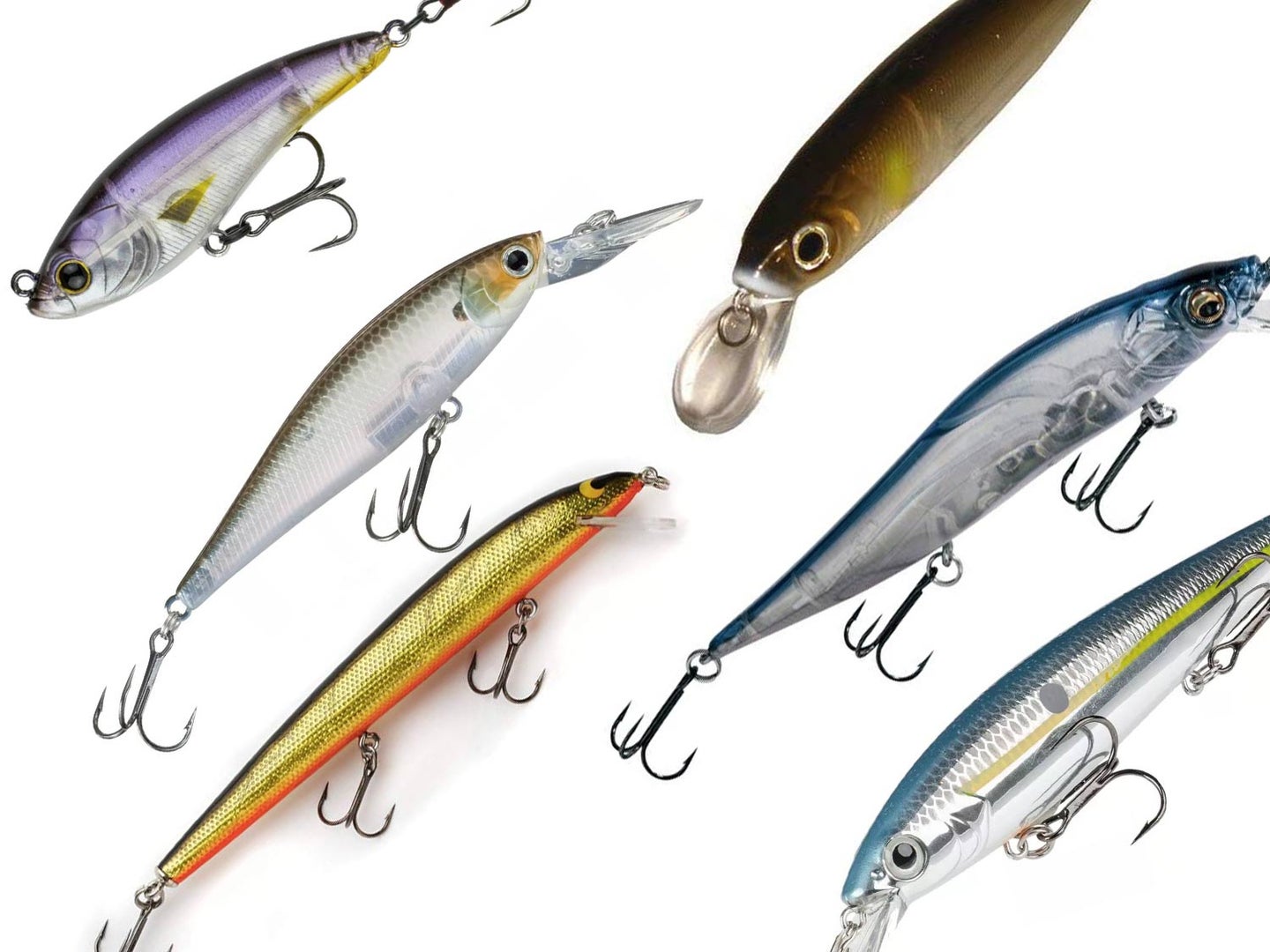 The elongated minnow shape of a jerkbait provides an easy meal for largemouth and smallmouth bass, and the lure’s side-to-side sashay draws fish from a distance, but when it comes to choosing the right style of jerkbait in the spring, many bass fishermen are at a loss because there are so many options. But here’s the secret: When it comes to jerkbaits, there’s no one perfect lure for every situation. You need to keep a variety of jerkbaits in your tackle box so you can fish for speed, get deep, or match the size of baitfish in the water. Here are the six of the best jerkbaits that’ll get you started and help you catch more bass this spring.

The Vision 110 is just over 4 inches long, weighs a 1/2 ounce, and suspends perfectly in a variety of water temperatures. But what makes it so effective is its harsh darting action that rolls, creating a flash that draws bass from a distance. It also has three super-sharp “out-barb” hooks to catch bass that just slash at it, and the internal weight transfer system allows for extra-long casts.

Hot Color – GP Pro Blue: Before they became widely available in the U.S., baits in this universal baitfish pattern were going for over a hundred bucks on eBay.

This jerkbait has a bit slimmer profile than its older brother, the Original Pointer, but it really excels when a little bit of extra erraticism calls fish from a distance. That makes it especially good for smallmouth bass that are notorious sight-feeders. The 112 size has three No. 5 trebles, which will keep those slashing bronzebacks hooked up during the fight.

Hot Color – Ghost Minnow: This clear-sided model provides no negative cues to turn wary fish away, but it’s still visible enough to call them from a distance.

The Bang-O-Lure may not be thought of as a true jerkbait because it does most of its damage on the surface, but this balsa staple shares the same minnow shape and shallow-diving bill as a jerkbait. With a subtle propeller on the back, it annoys bass guarding fry to no end. Throw it around buck brush or along grass lines and twitch it back slowly, with occasional pauses.

Hot Color – Black Back/Gold Foil: Bagley’s was historically based in Winter Haven, Florida, and this pattern perfectly that state’s golden shiners. The little slash of orange on the throat gives the bass a target to aim for.

Sometimes a snack is more appealing than a meal, and when bass are feeding on shad that are pinky-length or shorter, they often won’t even look at a standard sized 4-inch jerkbait. This sub-3-inch package sinks, but with a series of rod twitches and pops, you can make it dance.

Hot Color – Rayburn Ghost: A good reminder that sometimes even the fish on trophy lakes are keyed in on tiny bait.

This Japanese beast is 5 inches long and weighs a whopping ¾ ounce. With the internal weight system, it casts as well as something even heavier. But this lure isn’t just a big profile—it also fishes big. You can rip the heck out of the lure, pulling it until you feel like your arm is going to detach from the socket, and you still can’t overpower it. This big package is just as good for smallmouth bass as it is for largemouths.

Hot Color – Grass Shiner: With segments of gold and silver, this pattern can represent every baitfish from shad to bluegills to the California hitch, and it works in a variety of light conditions.

Most jerkbaits are made to work in 3 to 6 feet of water while using fairly light line (typically 8 to 12 pound test), but sometimes the fish are holding on deeper structure or cover. That’s when this diver should get the call. It gets down to 8 feet rather easily, and with a long cast and light line, 11 feet is not out of the question.

Hot Color – Sexy Shad: This is the pattern that Kevin VanDam made famous—and one that made him tens of thousands of dollars. It has baitfish appeal and a dash of brightness. Don’t question it, just throw it.