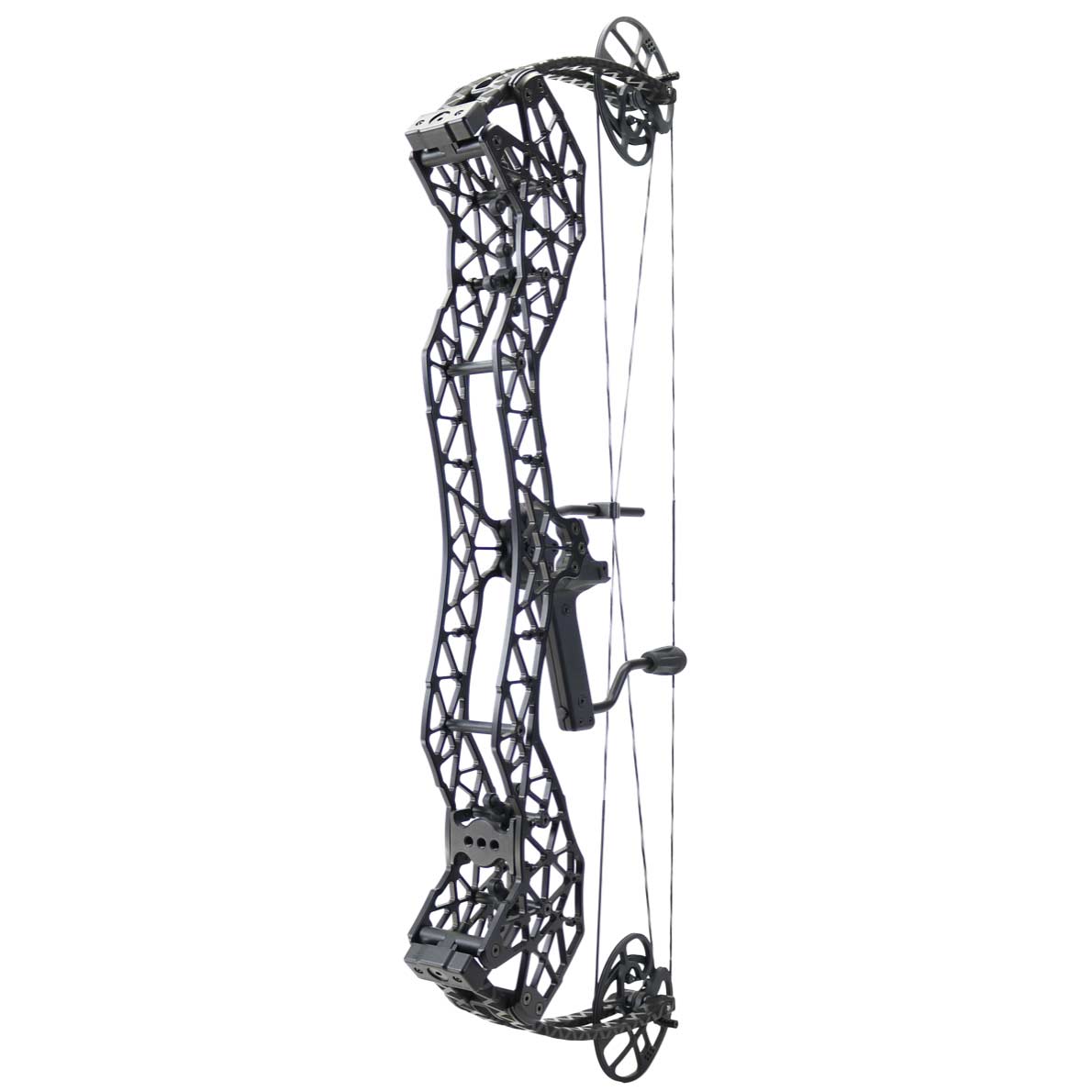 Some years are speed years, and some are shootability years. Each January, as I shoot one flagship bow after another at the ATA Show, it becomes clearer and clearer which way the new crop of compounds is trending. And 2020 is a shootability year—but with a twist.

Besides a couple notable exceptions, bow companies seem to have called a truce in the speed wars, at least for now. Whereas 350 fps was the IBO mark to hit last year, the majority of flagships I shot this time around were rated in the 340s and even 330s. In other words, you’re going to see a lot of smooth shooters on bow-shop shelves this year. And you’re going to see something else too: way more adjustability. Maybe the biggest trend for 2020 is that virtually every bow this year features a module or disc or locking screw that lets you customize the draw length, the draw weight, or the let-off, or allows you to fine-tune your bow for perfect bullet holes through paper—all without a press.

Lowdown: Bowtech is backing off the speed this year to give you smoother shooting and super-easy bow tuning via its new Deadlock Cam System, which allows you to move the cams left to right on the axle to eliminate cam lean and torque for perfect arrow flight. And all you have to do is turn a set screw.

First look: I always expect shooting a Bowtech to be enjoyable, but the Revolt surprised even me; the draw cycle was super-smooth, which I guess should be no shocker with a slower IBO than the company has produced lately. I love the Deadlock Cam and the tuning power it gives shooters without a bow press, and the new Clutch grip is comfortable. While not the speedster of its predecessors, the Revolt is a great-shooting bow that most hunters will really like. $1,099; bowtecharchery.com

Lowdown: Hoyt’s new ZTR cam builds on the success of the ZT cam introduced two years ago, but now offers a smoother draw, a harder back wall, and a new mod that lets you quickly adjust for draw length. Also new is an adjustable grip system that moves left and right to aid in comfort and tuning. Hoyt’s super-tough TEC carbon riser provides the platform for this rugged, lightweight bow. Also new, and totally cool, is Hoyt’s Integrate Mounting System, which is machined directly into the riser and allows compatible rests to be securely mounted perfectly flush and square.

First look: I don’t typically love the balance and feel of ultralight carbon-riser bows—but that didn’t hold for the Alpha, which settled in nicely at full draw. I shot really tight 3-arrow groups at the company shooting booth, which is hardly conclusive proof of long-range performance but does tell me that the bow naturally points and balances well. Hoyt’s new ZTR cam also provided a really pleasant draw and significantly harder back wall, which a lot of hunters will appreciate. At 342 IBO, the RX-4 Alpha has plenty of speed, but if you want to go even faster, there’s a Turbo version that’s rated at 350 IBO. $1699; hoyt.com

Lowdown: Mathews is continuing its tradition of smooth-shooting bows in 2020, but is doing it in a different way with the VXR. All new this year is an extended six-bridge riser designed to add strength and stability, but reduce weight. The new riser is also made to perform perfectly with their hugely successful Crosscentric cam system, which keeps arrow speed plenty zippy while providing the shooting comfort that Mathews is well known for. Also included is a module (new last year) that allows you to adjust the peak weight by 5 pounds. Finally, Mathews is introducing a Silent Connect System, which allows you to quietly attach their new pull-up rope or bow sling.

First look: I shot a whole lot of smooth-shooting bows at this year’s ATA, but none smoother than this one. It was also quiet and dead-in-the-hand. And it’s certainly no slouch at 343 IBO. I shot both the 28-inch version and this 31-½-incher, and both settled on target immediately and stayed there. All and all, this is yet another excellent offering from Mathews. $1,199; mathewsinc.com

Lowdown: There are plenty of new features on the Lawless, including the 4-track cam system that features an integrated yoke system designed to correct cam lean and balance limb tip load for easier tuning. There’s also a new rotating module that makes it a snap to adjust for draw length in ½-inch increments. The redesigned roller guard and string stop work together to ensure arrow clearance and decreased noise, and the improved grip was made to ensure comfort and reduce torque.

First look: I’ll confess that shooting a bow with a brace height just over 5 inches always scared me a bit, as I expected a harsh rollover and a short valley. But the Lawless was a pleasant surprise. At 356 IBO, this is one of those exceptions to the slow-down trend, although our testing has shown in the past the Obsessions IBO rating should be taken with a grain of salt. For now, we’ll give them the benefit of the doubt. I shot more arrows than I originally intended, which to me is proof the Lawless is a comfortable and pleasant shooter for such a fast-rated bow. $999; obsessionbows.com

Lowdown: There’s lots of innovation in 2020 from the folks at Prime, including their new ROTO Cam, which features a rotating module designed for easy and precise draw length and adjustments in ½-inch increments, with nothing more than an Allen wrench. For maximum tuning capability, Prime’s new Easy Tune Shim Kit lets you shift cams right or left during the tuning process. Prime is known for making a rock-solid riser, and it’s been redesigned this year for even more strength.

First look: I like that Prime offers its flagship bow in four different lengths (31, 33, 35, and 39 inches axle-to-axle), and I shot a few different versions of the Black. The 5 (35-inches) was the fastest of the models, but I handled it easily, and it pointed and shot very well. Just for kicks, I shot the 9 (39 inches axle-to-axle) and while noticeably slower than its shorter cousins, it was probably the quietest and deadest-in-the-hand bow I shot all day. $1,099; g5prime.com

Lowdown: The MX is the other exception to the slower-speed trend. It comes in two versions, the 5-inch-brace-height ultrafast (360 IBO) MX-15 and the 6-inch very fast (352 IBO) MX-16. Both feature the Hybrid Duel Stop (HDS) cam, which allows shooters to select limb stop, cable stop, or combination of both to adapt to their own shooting style. Draw length is adjustable in ½-inch increments without a bow press.

First look: I knew this would be the fastest bow on the ATA ranges this year, and being (a) old and (b) not usually a fan of speed bows, I was a tad nervous. My angst only grew when the tech informed me they only had a 70-pound model for me to shoot. But I was pleasantly surprised. Not only did I shoot the MX-15, repeatedly, but I shot it pretty darn well. The draw cycle puts most of the load up front, so the job gets easier as you go. The MX-16 is a bit easier to draw and still one of the fastest bows of the year. $1,099; xpeditionacrchery.com

Lowdown: The middle child of Gearhead’s 2020 lineup (the bow also comes in 20- and 30-inch versions), the Disrupter continues Gearhead’s tradition of nonconformist, innovative bows. The redesigned Zero Gap limb pocket anchors wider limbs to the riser, and a draw-length-specific cam allows for 15 pounds of draw weight adjustment. Several grip options are available for the Disrupter that allow shooters to customize color, style, and feel.

First look: It’s tempting to dismiss Gearhead’s short, futuristic-looking bows as novelties. But I found the mid-length Disrupter pleasant and fun to shoot. The 1911 grip felt good in my hand, and despite the bow being a whale of a lot shorter than anything else I shot at ATA, the draw cycle and overall feel seemed totally familiar, and arrows went exactly where I was looking. $749; gearheadarchery.com

Lowdown: Elite took some big leaps with the Kure. Most notable is the new ASYM tri-track cam, a departure from Elite’s two-track system. The ASYM was necessary to house Elite’s new Versa Mod Rotating Module, which lets you adjust draw length in ¼-inch increments. You can also choose between cable stops, limb stops, or a combination of both. Also new are Stabilock Limb Pockets, which provide increased stability but more importantly, host a slick system called SET (Simplified Exact Tuning) Technology; using nothing more than an Allen wrench, shooters can adjust limb pocket angle to fine-tune the bow for perfect arrow flight without touching a press.

First look: I always admire companies willing to rethink their design and do something different, and Elite did just that with the Kure. If adjustability and tuning options were the key themes for this year’s ATA, Elite was one of the leaders. And the company pulled this off without sacrificing the core feature that put them on the map: shootability. The Kure not only has a pleasant draw cycle, but was one of the quieter and most vibration-free bows I shot. $1,099; elitearchery.com

Lowdown: The EKO comes in four let-off options (75-, 80-, 85-, and 90-percent), and an included limb stop can be added for shooters who prefer a solid back wall. Another new feature from Bear is an Align-Lok level integrated into the riser that can work in conjunction with a sight bubble for perfect alignment. Finally, Bear has added Sonic Stop string suppressors to squelch noise and vibration.

First look: The smooth draw cycle and balance of the EKO were the stand-out features for me when shooting this bow at the ATA range. It settled in and pointed nicely. I did feel a touch of hand shock at the shot, but overall the EKO was a solid shooter, at a good price compared to other flagship models. $999, beararchery.com

Lowdown: The PSE Evolve Cam was a favorite with our testers last year, and for 2020 PSE has both improved that feature and married it with a redesigned, unidirectional, one-piece carbon riser, which is ultralight yet strong and features a new grip for added comfort and stability.

First look: You might think a carbon-riser bow this light might be jumpy and hard to handle, but I didn’t find it that way at all. Thanks in large part to the excellent Evolve Cam system, the Air Stealth Mach 1 is a joy to shoot. The draw cycle is smooth and the valley was very generous on the test-model I shot. (Let-off is adjustable between 80- and 90-percent.) The same cam system is available on the aluminum-riser EVO NXT, which is more affordable, but I found this carbon-riser model impressive for its light weight and shootability. $1,599; psearchery.com