Jim Bowie: The Man, the Myth, and the Knife 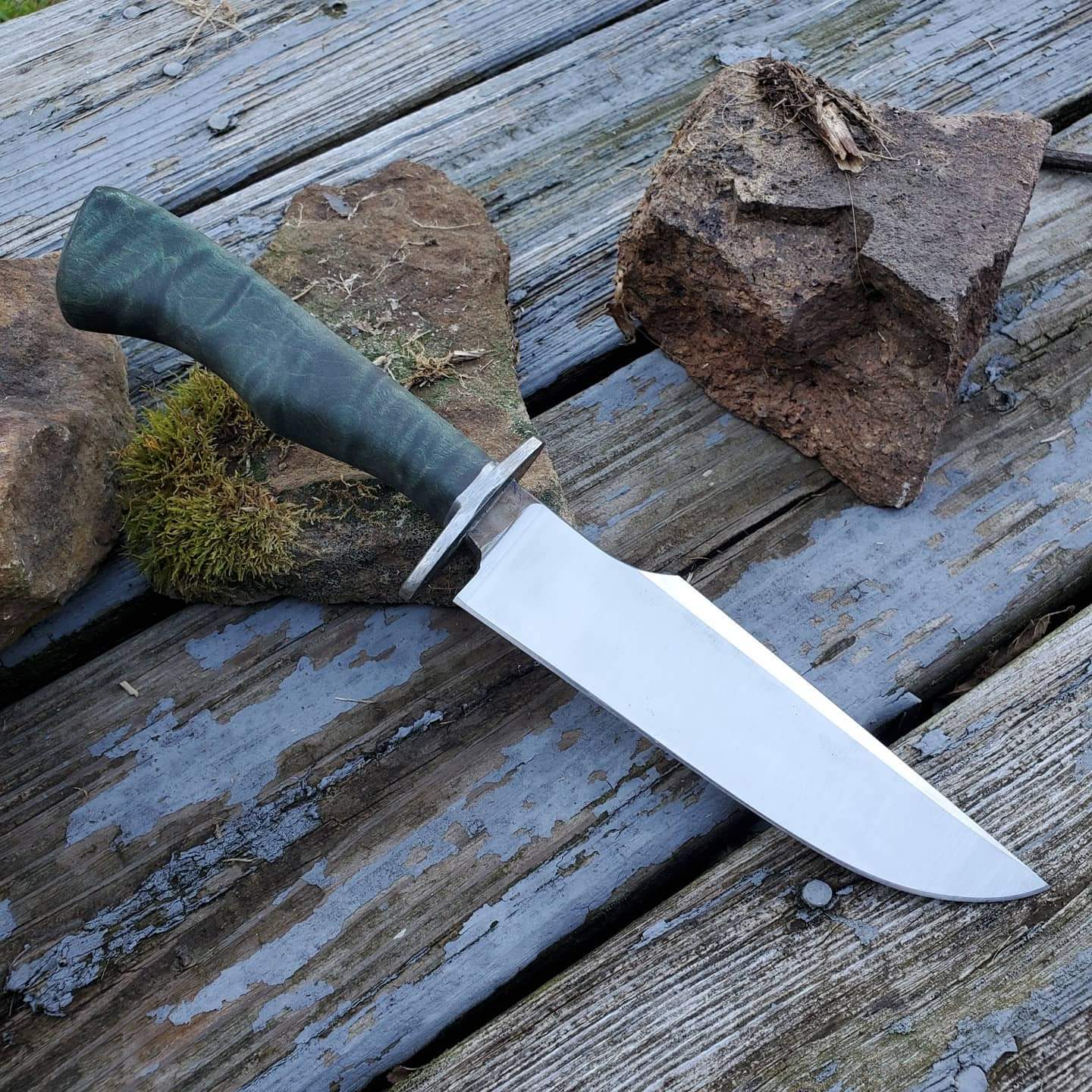 The Bowie is a classic American blade. Wiki Commons
SHARE

Jim Bowie, in his brief lifetime, was as famous as any American then drawing breath. The knife he left us, which bears his name, ranks with the Kentucky rifle and the Colt Peacemaker as an iconic American weapon, but no one knows for certain what it looked like, or who made it, or what became of it. Bowie himself is a mystery. Many of the things he’s supposed to have done may be myths.

He came to great fame, died heroically, and passed into legend. But he remains elusive.

Who Was Jim Bowie?

What we do know is that Bowie was born in Logan County, Kentucky, on April 10, 1796, but was raised in Louisiana. He grew into a big man for his time, standing 6 feet tall, weighing 180 pounds. James and his brother, Rezin, speculated in land and timber, opened a sugar-cane mill, and bought and sold slaves. They were considered well to do.

According to Rezin, James was easy enough to get along with when unprovoked, but when pushed, he went from affable to homicidal with no stops in between. And he did not back away from fights. In this he had plenty of company.

The Antebellum South was gripped by a craze for dueling that would last until the Civil War. Men’s honor was easily offended, and the cure for an insult, real or perceived, was someone’s blood, courtesy of sword or pistol. Dueling was illegal, but no one paid any attention.

Bowie became famous at what began as a duel. It was called the Vidalia Sandbar Fight, and took place on September 19, 1827, on a dry stretch of the Mississippi River near Natchez. The principles were Samuel Wells and Dr. Thomas Maddox, both wealthy and prominent citizens who had grievances against each other. There was also a crowd of seconds and supporters present, 17 in all, of whom 12 had a past history of armed encounters. Bowie was part of this mob, there in support of Wells.

Roughly at noon, Wells and Maddox exchanged shots twice. No one was hurt, and since this satisfied the Code Duello, the men shook hands and were about to call it a day. However, one of the crowd was Major Norris Wright, who had shot Bowie some time earlier. Bowie, who was neither seriously wounded nor inclined to forgive and forget, had tried to kill Wright with his bare hands, but was pulled off.

The Sandbar Fight began in earnest when a man named Crain fired at one named Cuny and missed, hitting Bowie in the hip and knocking him to the ground. Bowie got to his feet, drew a knife that Rezin had loaned him, and charged Crain, who struck him in the head with the empty pistol so hard that the gun shattered. Bowie went to his knees.

At this point Norris Wright saw his opening, drew a cane sword, and stabbed Bowie in the chest. The blade, however, bent on Bowie’s sternum, and as Wright tried to yank it free, Bowie grabbed Wright’s arm, pulled him to the ground, and disemboweled him. Wright obligingly died, but Bowie was struck by two more pistol balls and stabbed a second time. At this point, everyone who was not bleeding cleared out; the brawl had taken 90 seconds.

There were two surgeons present, and they patched up Bowie as best they could and gave him little chance to live. But survive he did and found himself a celebrity. Newspapers got the story, and Bowie became a national hero.

Possibly having run out of people to kill, Bowie moved to Texas in 1828. There he became fluent in Spanish, took out Mexican citizenship, and married a well-born young woman named Ursula Veramendi, with whom he had two daughters.

Marriage did little to settle him. He and Rezin searched for the lost San Saba silver mine, and in the course of hunting for it got into a pitched battle with a mixed-tribe force of Indians, whom his group fought for 13 hours, losing only one man and killing 40 of the other side. Already famous, Bowie became far more so.

Fate had spared Bowie several times, but not his wife and daughters, who died in a cholera epidemic in 1833. It wrecked him. He became an alcoholic, but was saved by the movement for Texas independence which gave him something to live for again. He was made a colonel in the Texian Militia, was offered a colonelcy in the Texian Army on the staff of Stephen Austin. Bowie declined the regular commission, saying that he would rather be a private, and enlisted in that rank.

However, as the war with Mexico progressed, he so distinguished himself that he received the Army colonelcy anyway, and eventually found himself at the Alamo with David Crockett, William Barrett Travis, and somewhat under 200 volunteers. They faced 4,500 Mexican regulars commanded by General Antonio Lopez de Santa Ana.

Bowie met David Crockett at the Alamo, and the two apparently hit it off. At one point Bowie unsheathed his knife and Crockett is alleged to have said, “You might tickle a man’s ribs a long time with that before you’d make him laugh.” Which was true, and sounds like Crockett.

The siege of the Alamo began on February 24, 1836. It fell on March 6. Bowie had been bedridden with pneumonia through the battle, and met his death fighting from his cot. Dying, he is supposed to have killed nine soldados. The bodies of Bowie, Crockett, and Travis were burned.

The Bowie Knife Lives On

No one knows what happened to Bowie’s knife. Most likely, it was picked up by one of the men who killed him and either taken back to Mexico or lost or re-swiped at the Battle of San Jacinto, at which Santa Ana’s army was defeated.

This was the “real” Bowie. Probably it was a big knife, with a heavy blade of 10 inches, give or take a few. It probably had a concave false edge, sharpened, and twin quillons. It was a weapon, not a tool, and copies of it became enormously popular in the South and on the frontier. The demand became so great that England’s Sheffield cutlers became a major supplier of Bowies; we know of at least 40 manufacturers. There were an additional 40 American firms making them, and some smaller cutlers such as Will & Finck in San Francisco and Searles in Baton Rouge who produced very fine Bowies.

And there were untold thousands turned out by blacksmiths. These were big, crude, and heavy. Confederate soldiers loved to be photographed with colossal Bowies stuck in their belts, but I think mostly this was for the camera. Of all the wounds inflicted in the Civil War, .04 percent were caused by edged weapons, and this includes swords and bayonets. I suspect that bayonetting a Yank or hacking him to death was just a little too grim for all but the most dedicated Rebs.

Also, a Bowie was not useful except as a weapon, and if you were a Secesh infantryman making 30-mile marches at 4 miles per hour, day after day, with not enough to eat, the last thing you needed was 3 pounds of occasionally useful steel stuck in your belt.

After the Civil War ended and the cartridge-firing revolver ascended, the Bowie in its original form became a relic. But it continues to thrive. The Ka-Bar, which is a much-scaled down Bowie, has been in the inventory of our armed forces since 1943. It’s a tool first and a weapon second. The Randall Model 1 All Purpose Fighting Knife has been around the exact same amount of time and served in every war we’ve been in. It, too, is a Bowie.

Collectors love Bowies. If you go to the website of Arizona Custom Knives, which is the biggest purveyor of such, you can see all manner of Bowies from all manner of smiths. There are plain ones and fancy ones, big ones and little ones, ugly ones and graceful ones. All are, I’m certain, of far higher quality than anything Jim Bowie carried or dreamed of.

If you’d like to own one, I suggest the Western Cutlery Model W49, which is that (now defunct) company’s big Bowie. It’s an excellent knife. There are a lot of them around, and some can be had quite cheaply. The Marine Raiders issued it to their members as the V49 during World War II, and Robert Redford carries one in Jeremiah Johnson. From there on, the sky is the limit. If you’d like a Bowie from the legendary smiths Bill Moran, or D.E. Henry, you’ll need to take out a second mortgage to pay for it.

Bowie, by today’s standards, was not an admirable guy, and if Cancel Culture ever finds out about him, he’s done for. But if you admire courage, no one had more. And no one questioned his…and lived.

*Correction: My comments on Confederates discarding their Bowies was a product of 21st century thinking, and according to Kenny Jarrett, the South Carolina rifle maker and an expert on Civil War equipment, it’s not the way 19th century Secesh infantry thought. According to Kenny, who has a number of authentic Confederate Bowie knives, they were so highly valued by their owners that the boys in butternut would discard overcoats or blankets or just about anything else before they left their prized hewers and hackers at roadside. Jarrett’s Bowies are truly monstrous cleavers with blades of 12 to 15 inches and a weight of 3 to 5 pounds. All are blacksmith-made. Kenny says they were carried in the tens of thousands, and that they were not only used for dismembering Yankees, but for all manner of chores in camp. Live and learn.