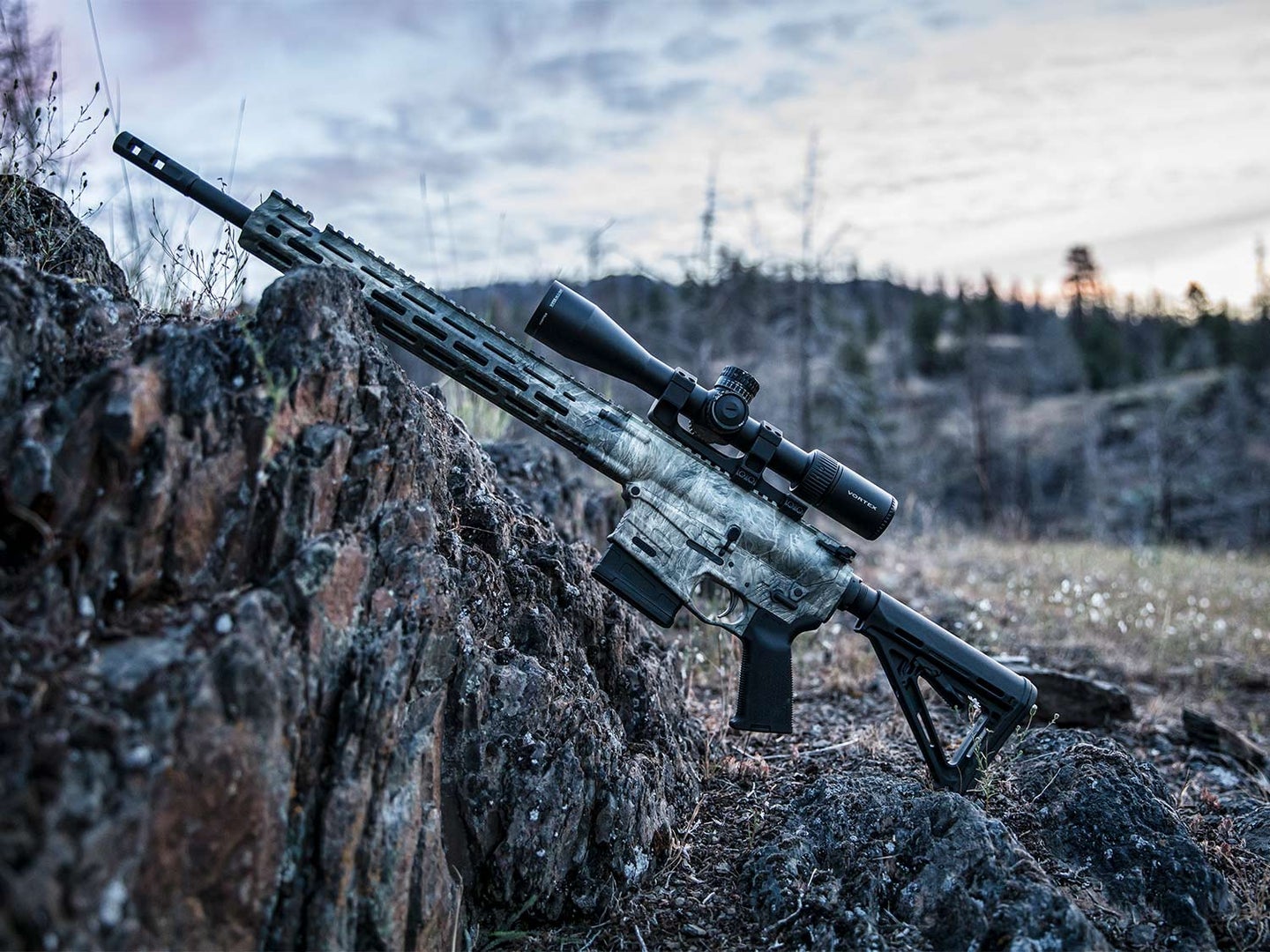 One of the reasons for the popularity of the modern sporting rifle is its incredible versatility and adaptability. It’s an ideal platform for shooting competitions, personal defense, and hunting. Many MSR enthusiasts have used AR-10 rifles chambered in 5.56 to shoot prairie dogs, varmints, and predators, and hog hunters have long opted for AR-15s chambered in the larger 7.62. Savage Arms has served these markets, but its designers also saw that big-game hunters might benefit from the AR platform as well. That was the thinking behind the introduction of the MSR 10 Hunter chambered in .308 and 6.5 Creedmoor in 2017.

The company has taken that design a step further with its MSR 10 Hunter Overwatch. This rifle builds on the trusted MSR 10 Hunter platform, adding Mossy Oak Overwatch camo, the official pattern of the National Rifle Association. The rifle also features a compact design that minimizes weight (just under 8 pounds without a scope), which means it can be carried all day on a big-game hunt. The adjustable Magpul MOE stock is also a welcome addition, as are the Magpul free-floating M-LOK handguard and pistol grip.

Savage engineers designed the MSR 10 Hunter Overwatch to be accurate, dependable, and rugged. Although some manufacturers might be content to hit two out of these three objectives, Savage engineers didn’t rest until all three goals were attained.

The accuracy of the MSR 10 Hunter Overwatch is achieved through a number of design elements, the most important of which is 5R rifling. The rifling commonly found on most sporting rifles features a spiral design that allows the bullet to rotate, helping it to achieve a stable flight downrange. There’s just one catch: this traditional design can be hard to clean, and the accumulated barrel fouling will eventually degrade the rifle’s accuracy.

A crisp, light trigger is also a critical component of accuracy. But many factory-installed modern sporting rifle triggers, like the triggers found on many traditional bolt-action rifles, leave something to be desired. These less-than-ideal triggers have long frustrated hunters in search of topnotch accuracy, and such design deficiencies have helped create an entire industry dedicated to aftermarket triggers.

Savage wanted something better for the owners of its MSR 10 Hunter line, so it has installed nickel-boron triggers. The two-stage triggers help reduce creep while permanently ensuring a smooth pull and clean break. In essence, the company has provided aftermarket-quality triggers at no extra charge.

Most of today’s modern sporting rifle platforms use what’s called a direct impingement gas system to power their semi-automatic actions. It is a reliable design, but for maximum performance the length of the gas system must be matched to the barrel length. Despite knowing this, many MSR manufacturers use a 16-inch barrel paired with a carbine-length gas system meant for a 14-inch barrel. Though this one-size-fits-all strategy may save money at the manufacturing end, it unfortunately increases recoil and reduces accuracy.

Savage went down a different road by matching each rifle’s gas system to the length of the barrel. The barrel length for .308 models is 16 inches; barrel length for 6.5 Creedmoor versions is 18 inches. Savage owners can rest assured that no matter which model they choose, the gas system of their MSR 10 Hunter Overwatch is precisely tailored to the length of the barrel. This helps deliver reliable cycling, low recoil, and enhanced accuracy.

Furthermore, Savage MSR 10 Hunters feature an adjustable gas block that lets you customize the rifle to your specific ammunition and even shooting stance for flawless cycling. It’s an easy do-it-yourself process, another indication of Savage’s dedication to its customers.

Since the MSR 10 Hunter Overwatch was designed for hard use in the field, Savage engineers knew the hunters who carried it would be climbing in and out of tree or box stands, clambering through boulder fields, or crawling over sage grass flats, environments that can take their toll on even the toughest gear. Savage wanted to make sure the MSR 10 Hunter Overwatch was up to the challenge, so each barrel (inside and out) receives a special treatment designed to keep it operating at peak performance no matter how challenging the terrain. Melanite QPQ (“Quench, Polish, Quench”) is a thermochemical, nitrocarburizing process that produces a long-lasting non-reflective finish harder than chrome. It also reduces friction, providing wear and corrosion resistance far superior to standard coatings and platings.

At many companies, performance comes with a price. Not at Savage. It believes “Better Comes Standard.” You better believe it. The MSR 10 Hunter Overwatch costs only $1,599. (savagearms.com)