How to Build Warm Survival Shelters

Two pillars of survival are shelter and fire. Here’s how to combine both to stay alive in an emergency 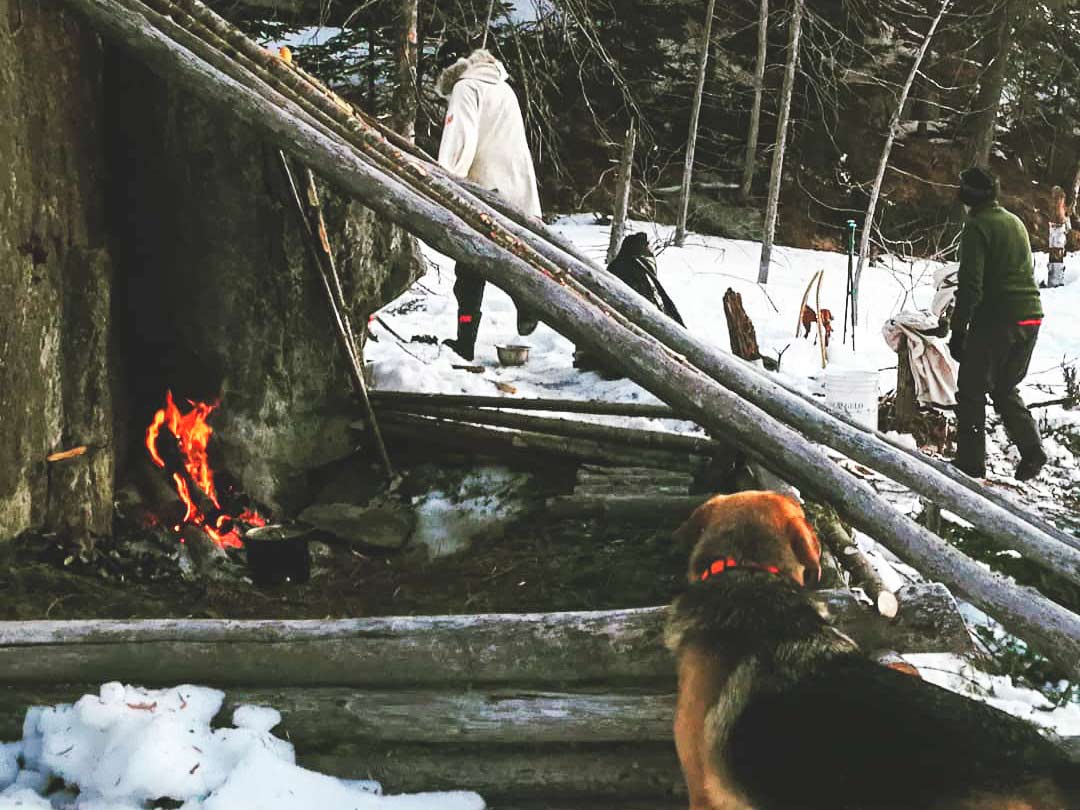 This sturdy shelter will keep a group warm and dry. Jim Baird
SHARE

Shelter, fire, water, and food are the four pillars of survival—and if you run into trouble, you want to prioritize them in that order too. There is some debate, however, between shelter and fire and which one should come first. For example, if you were to take an accidental dip in a remote glacial river, you’d better get a fire going before you build a shelter. But if you find yourself lost or stranded in cold weather, particularly if you have inadequate clothing or no sleeping bag, your best option is to combine both of these steps and build a shelter with a fire inside it or immediately adjacent.

Adding a fire in your shelter will make life a lot more comfortable, but it can create a fire hazard. Particularly after extended use, the wood and debris used to build the shelter can dry out and might catch fire. In most cases, you need to keep your fire small and building a robust stone hearth is key. It’s also worth noting that shelters with a fireplace in them can get smoky. Reduce the smoke by keeping the fire hot and flaming by adding more wood when the fire begins to burn down and by making sure you’ve included an adequate smoke hole.

Here, I’ll explain how to build a few survival shelters that incorporate fire. They are similar in their basic construction: Each one is practical, sturdy, waterproof, and, perhaps most important, fast to build.

1. How to Build an A-Frame Shelter

Like its name suggests, this small, squat shelter is built in the shape of the letter A. The use of a rock face for foundational support and heat reflection from the fire makes this shelter a comfy one for one or two people.

Step 1: Take a long log and prop one end up on a large rock leaving the other end on the ground. This will be your ridge pole.

Step 2: Make a stone hearth in front of the large rock and under the propped-up end.

Step 3: Pile a deep bed of evergreen boughs under the ridge pole down from the fire.

Step 4: Cut logs that are about as thick as your arm, and lean them up against the ridge pole, making sure you leave enough room near the fire to climb in and out. While you’re cutting, remember that logs leaning on the bottom of the ridge pole should be significantly shorter than ones near the fire.

Step 5: Cover the structure in heaps of evergreen boughs

Step 6: Layer strips of birch bark as shingles over the boughs and hold them in place by laying more logs on top of them.

Pros: The large rock will reflect heat from the fire back into this squat and well-insulated shelter, and with little structure or debris above the fire pit, this kind of shelter is unlikely to catch fire.

Cons: This style of the shelter doesn’t allow you to spread out perpendicularly beside the fire, so all the heat will be on your head and your feet may get cold. Compensate by building the front of the shelter wider allowing you to curl up by the fire when the temperature drops.

2. How to Build a Rock Wall Lean-to

This shelter does an excellent job at blocking any winds or draughts making it a warm choice—even for a group of up to six people. First, a 2-foot-tall rectangular log wall is built against a rock cliff and then logs are laid diagonally overtop of it. After the structure is wrapped in a large tarp, there’s little space for any wind to enter.

Step 1: Find a rock wall and build 2-foot-high, log cabin-style rectangular walls onto it to create a 7×15-foot space.

Step 2: Lay a thick layer of evergreen boughs down as bedding.

Step 3: Lay logs at about a 45-degree angle over the rectangle, resting them on top of the rock wall.

Step 4: Create a hearth by making a half moon of rocks up against the rock wall in one corner.

Step 5: Cover the whole structure in a large tarp and cut a space out at the top in one corner above the fireplace for a chimney.

Step 6: Use a flap of the tarp at one end to cover the door entrance.

Step 7: Lay more long, arm-width logs on the outside of the tarp to hold it down.

Step 8: Help create a draft by making a small rock tunnel from the outside that will provide air flow to the fire. This will help prevent the shelter from getting smoky when the shelter is sealed.

Step 9: Shovel snow onto the bottom flap of the tarp all around the outside of the shelter or use rocks to secure it. (Note: You can use snare wire or cordage to sew the tarp down to the structural pieces in places where you need it to stay put such as around the chimney.)

Pros: This shelter can sleep five people, and because it works extremely well at blocking the wind, is very warm.

Cons: The prominent rock wall will get very damp making it an unwelcome back rest. Also, with only one fire, some people will be closer to the heat than others. Compensate by making a fire place in both corners, but keep in mind that this could create a smokier environment.

3. How to Build a Bark-Roofed Lean-To

If you’re caught without a tarp, sourcing a large piece of bark can make all the difference if your experience is paired with a dose of cold rain. This basic survival shelter can be constructed with natural materials and is best reserved for warmer seasons or very sheltered locations.

Step 1: Find a sheltered area and secure a ridge pole horizontally between two supports, such as two trees or a tree and a rock ledge. Tightly lash the ridge pole with strong cordage and consider supporting it with by propping it up on additional vertical logs lashed to the trees on either side.

Step 2: If necessary, build a platform with logs to create a level area to sleep on and cover it with a thick layer of boughs.

Step 3: Keeping in mind to leave the open side facing away from the wind, lean a series of arm-thick logs up on the ridge pole at a 45-degree angle to cover the sleeping platform.

Step 4: Carefully peel the bark off of an ash, elm, birch or spruce tree (ash or elm works best) until you have two large pieces of bark and place them over the structure to create a natural waterproof roof. (Note: if using birch or a type of bark that curls, you’ll need to lay additional logs on top of it to hold it flat.)

Step 5: Close in both sides of the shelter using sticks, logs, debris, boughs, or snow.

Step 6: Leaving the front open, create a fire place on the ground in front of the ridge pole.

Step 7: If possible, to trap in heat and block wind, consider covering the front of the shelter with clear plastic sheeting when the fire is going outside of it.

Pros: Despite it being open at one end, this is a surprisingly warm shelter when the fire is going. It also makes good use of natural materials and is particularly helpful if you don’t have a tarp, or if you need to use your tarp for another application. This style of shelter can also be built quickly, especially if you forgo the bark roof and use a tarp.

Cons: Because the shelter is open at one end, it provides little protection from a head wind. As mentioned, consider carrying a piece of clear plastic sheeting to reduce the severity of these issues. Lining the inside with a Mylar Emergency Blanket will further reflect and contain this heat. (Note: Removing the bark from a tree in this fashion with kill any given tree. For the shelter shown at the top of this story, the bark of a downed ash tree was used, which is a near-perfect material for this application.)