How to Keep Your Hunting Dog Safe in Snake Country

Plus, what happens when your dog does get bit 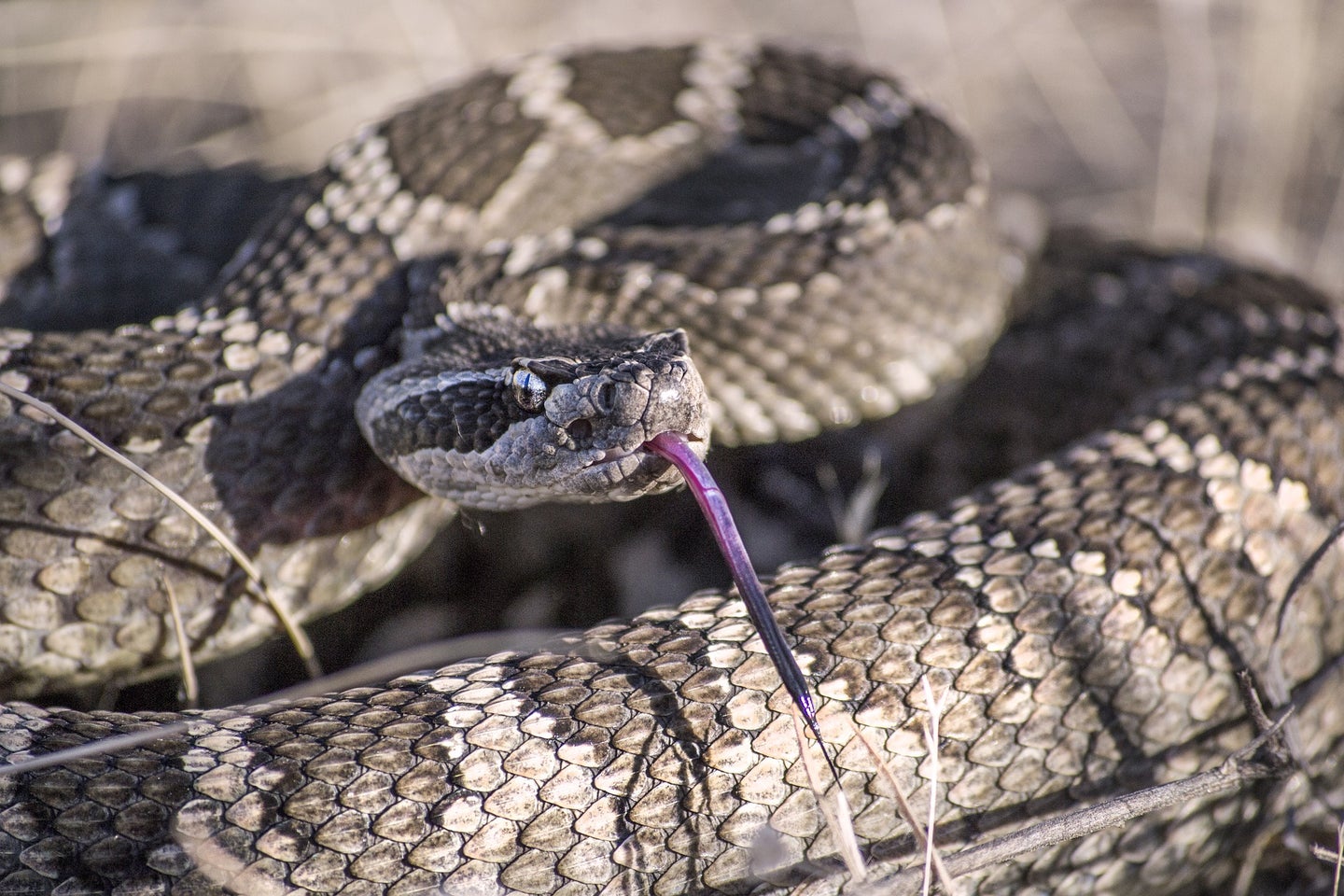 A lot of us who go West—meaning to the Dakotas and beyond—to chase pheasants and other upland birds find ourselves hunting in some toasty weather. And the toastier the temperature in that part of the world, the more active rattlesnakes are likely to be. This is a relatively minor concern for us who stand on two legs (at least in terms of our personal safety), but it’s a huge one for our dogs, whose exposure is vastly greater than ours. The bottom line is that if you’re hunting the West when it’s warm, you need to be prepared for the possibility that your dog could get bitten.

As a first line of defense, many veterinarians recommend the rattlesnake vaccine developed by Red Rock Biologics. Administered initially in two doses a month apart followed by an annual booster, it stimulates the dog’s immune system to produce antibodies specific to the toxins found in the venom of most rattlesnakes. While the vaccine doesn’t completely eliminate the effects of a snakebite, in most cases it substantially reduces their severity.

“That’s been our experience,” says Dr. John Voegeli of the Animal Clinic in Winner, South Dakota. “We recommend it for all dogs that are at high risk for snakebite. Some dogs have a mild reaction to the shot, just as they sometimes do to other injections, but we’re satisfied that it’s a safe, effective product.”

It’s not terribly expensive, either—the going rate is around $30-$40 per dose—so in that respect it’s pretty cheap insurance.

Still, Voegeli stresses that whether your dog’s been vaccinated or not, snakebite is always—always—a veterinary emergency. (Which is why, whenever you’re hunting in snake country, you should learn beforehand where the nearest vets are located.) The critical things to remember, he says, are to get your dog to the vet’s as quickly as you can, and to keep him as quiet as possible enroute. The more agitated your dog becomes, the faster the toxin will spread through his system.

“Every snakebite case is different,” Voegeli notes. “The placement of the bite, the amount of envenomation, the size of the dog and its individual susceptibility to the effects of the neurotoxin…There are a host of variables that we weigh to determine appropriate treatment.”

RELATED: 10 of the Most Venomous Snakes in the World

As a rule, says Voegeli, treatment with antivenin is required in only the most serious cases. The kicker is that you can’t wait to “see how the dog’s doing”; you have to make the decision to administer it ASAP. But it’s expensive—$600 to $800 or more—not every veterinarian stocks it, and even the ones who try to keep it on hand can have trouble getting it depending on the vagaries of the supply.

The best outcome of all, of course, is for your dog not to get bitten in the first place. You can reduce the risk by steering away from obviously snaky places such as prairie dog towns, clusters of old buildings, and rocky south-facing slopes. You can also have your dog “snakeproofed,” a procedure that involves exposing the dog to a live de-fanged rattler and zapping him with an electronic collar the moment he displays any interest in it. After a few jolts most dogs will give snakes of any stripe a wide berth for the rest of their lives.

Accidents happen, though, so it pays to know how to respond. — Tom Davis

What Happens When a Rattlesnake Bites a Dog?

My dogs were playing in the yard while I was outside shooting my bow. It was just a typical lazy Saturday until I heard Sue yelp. The loud, sharp cry was different from the usual chaos. Sue ran toward the house, and when I got there I noticed a small puncture hole on the right side of her face, oozing blood. My first guess was that a wire from the fence poked her, but I could see her face already starting to swell. I called the emergency veterinary clinic, and they said bring Sue in—fast.

At the clinic, Sue’s face kept swelling, and her eyes were droopy and bloodshot. When a test came back positive for rattlesnake venom, the vet gave her antivenin, then placed her in a crate to rest. While Sue recovered, I drove back to the ranch to search for the snake. My 6-year-old daughter plays in the same yard. I wanted the rattler dead.

Hidden under the lip of our concrete storm cellar, a forked tongue flicked out at me. I shoveled dirt away until a 4-foot western diamondback came slithering out. I killed the snake with one blast from my 20-gauge.

Sue’s painful moans and groans echoed through the clinic when I returned that evening. Her face had ballooned to the size of a basketball. My eyes welled, and I felt so helpless knowing there was nothing I could do for my girl. Would she live to see another quail season? Would she even survive the night? It was still unclear. I took Sue home and stayed up with her, stroking her side and patting her head and hoping for the best.

On Monday morning, I carried Sue—limp in my arms and badly dehydrated—to my regular vet. A team of vets watched her for eight days, giving her fluids by IV. Sue was very weak at first—unable to walk and barely strong enough to lift her head. The vets said it was the worst rattlesnake bite they had ever seen and that without getting the antivenin when she did, Sue would have died.

Today, even after three surgeries, Sue is missing part of her face [see photo above], but she is as spirited as ever. She sleeps on my bed, and I let her eat anything she wants. After what she endured, she deserves it. — Brandon Ray