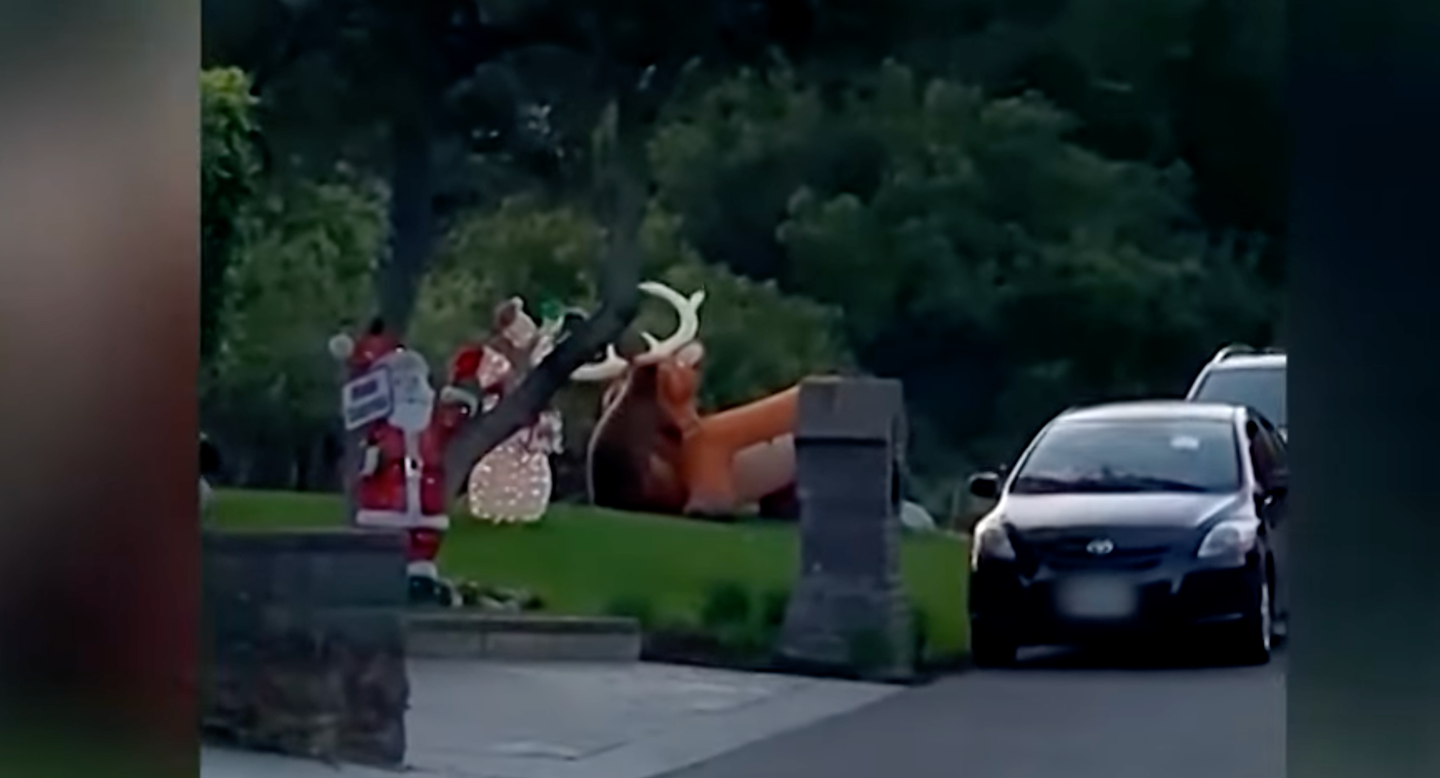 Okay, it may not be Rudolph, as the nose appears to be black. On the other hand, it looks a lot more like a whitetail deer than a reindeer, so who’s to say? Whatever the case, there doesn’t seem to be anything cuter—or more comical—than a bear cub attacking an enormous inflatable member of Santa’s team. At least that seems to be the lesson of a CBS Los Angeles newscast of an incident that recently took place in the yard of a residential Monrovia, California, home. “I looked up and there it was jumping on the reindeer,” Donna Hargett, who recorded the footage of the “attack,” told CBS Los Angeles. She’s a neighbor of the person that had put out the 6-foot inflatable reindeer. “I was laughing to myself out in the street.”

Be it a fake reindeer or whitetail, the bear definitely singles out the deer-like decoration from among the other blow-up dragons, toy soldiers, elves, and Santa Clauses displayed on the front yard. Meanwhile, a larger bear, almost certainly its mother, watches calmly as the young buin tries to bite Rudolph’s (or Prancer’s or Vixen’s) nose off. Surprisingly, during the 30-second encounter, the bear never manages to puncture the inflatable critter, though it attacks it pretty ferociously, biting its face and neck and then trying to take a chunk out of a rear leg. It really seems to think there’s a meal in there somewhere.

Donna Hargett’s take on the attack is that the bears were “pissed” the reindeer had taken over their territory, which begs the question of what the bears think of the people that actually own the yard. During her interview with CBS, Hargett lets slip a tidbit about the bear cub and its mom that’s way more startling than the attack on the reindeer. Hargett says the duo broke into her house “through the window one time. There were scratches on the wall and one got up on the bed. There were paw prints…. We see these two [bears] around all the time. They’re trouble.”

Although the blow-up reindeer seemed to have survived the “attack” by this cub, real bear attacks are no joke. On the other the hand, if you can’t laugh at this video, your heart may be two sizes too small.