8.5-Foot Black Mamba Removed from Behind T.V. in South Africa 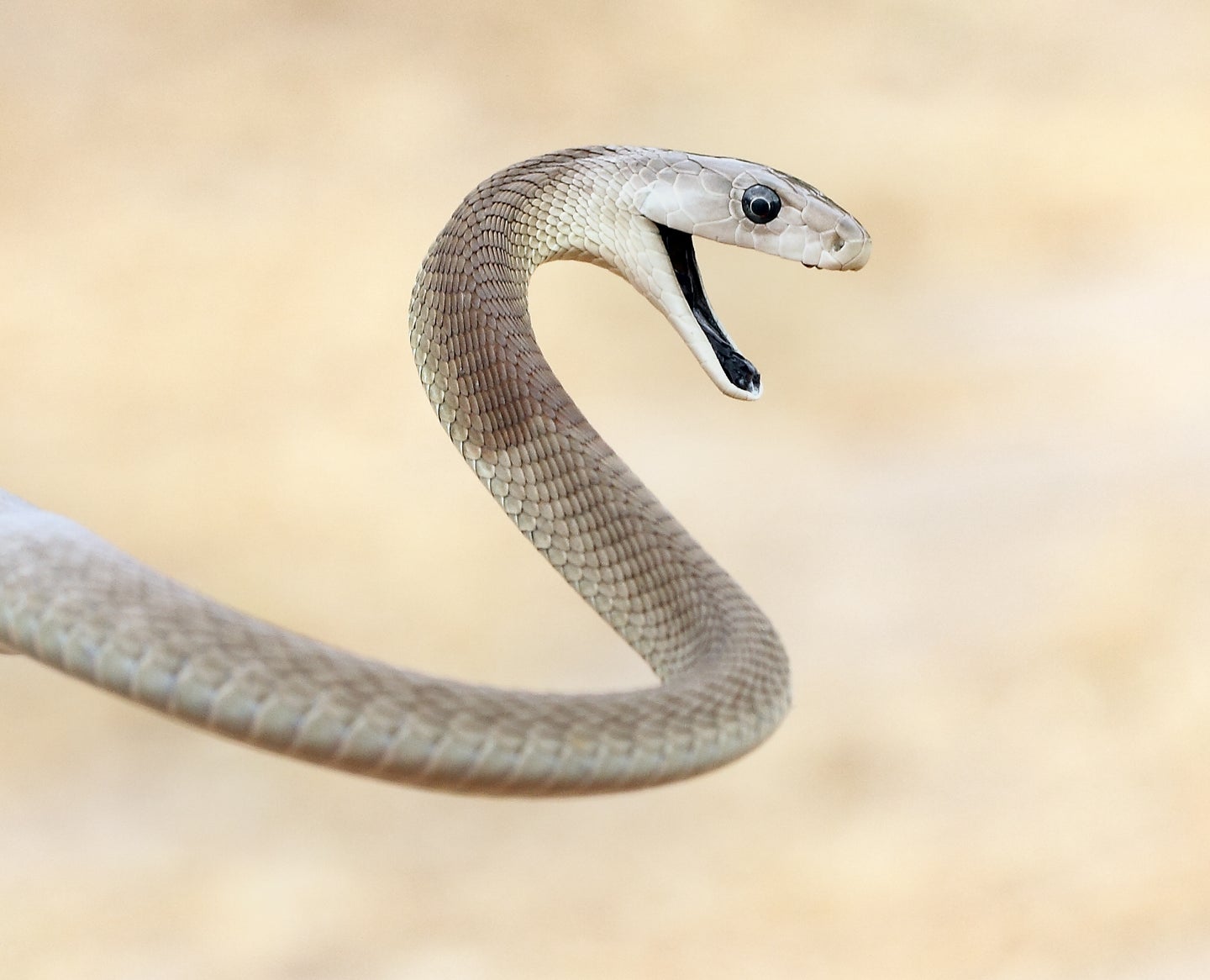 Black mambas can slither at speeds up to 12.5 miles per hour. Getty Images
SHARE

A South African man relaxing in front of the television was in for a surprise when an 8-and-half-foot black mamba slithered through an open patio door and got comfortable next to the television.

Nick Evans, a snake rescuer and founder of KwaZulu-Natal Amphibian & Reptile Conservation, was called to capture the snake in the Westville area of South Africa. He responded to the location expecting to find a house snake, a harmless native of Africa that is widely bred and often kept as a pet.

“It wasn’t,” Evans wrote in a Facebook post. “I walked into the lounge, and next to the TV, behind some boards, was a black mamba! The man had been sitting down watching TV…when the 2.6-meter (8.5-foot) snake came slithering in through the sliding door next to him. I can only imagine his reaction.”

Evans is a reptile enthusiast who was inspired by “Crocodile Hunter,” Steve Irwin at an early age. He has spent much of his life working with dangerous snakes. He founded his conservation and rescue business in 2015 to create awareness and understanding about “these amazing animals that are so feared and misunderstood.” He described his recent capture of the black mamba  as “such a rewarding call.” Evans had encouraged people in the location where the snake was removed to call him when they find black mambas instead of killing them.  “I just wanted to resolve these situations more peacefully,” Evans wrote, noting that he doesn’t disclose the names of his clients. He also noted that it’s also very dangerous to kill a mamba.

The black mamba is known to be the fastest snake in the world and the longest venomous snake in Africa. They can grow to be 14 feet long. They are also among the world’s deadliest snakes, due to their highly toxic venom and aggressive response when threatened. Black mambas will strike repeatedly and can inject a massive amount of venom with each bite. If untreated, a mamba bite is 100 percent fatal. However, mambas often use their speed to avoid conflict rather than seek it out.

“I’d like to point out how [the snake] didn’t lash out and attack,” Evans wrote. “Instead, it just went about its business, as they do, trying to avoid people.” Evans relocated the snake to an unpopulated area.

Besides this incident, Evans has safely removed a number of venomous serpents in February 2022. According to his Facebook page, he has captured and released a boomslang that came in through a window and also hid behind a TV, a Mozambique spitting cobra that a homeowner had trapped under a plastic container, as well as several other black mambas, including one that killed and ate seven pet birds.