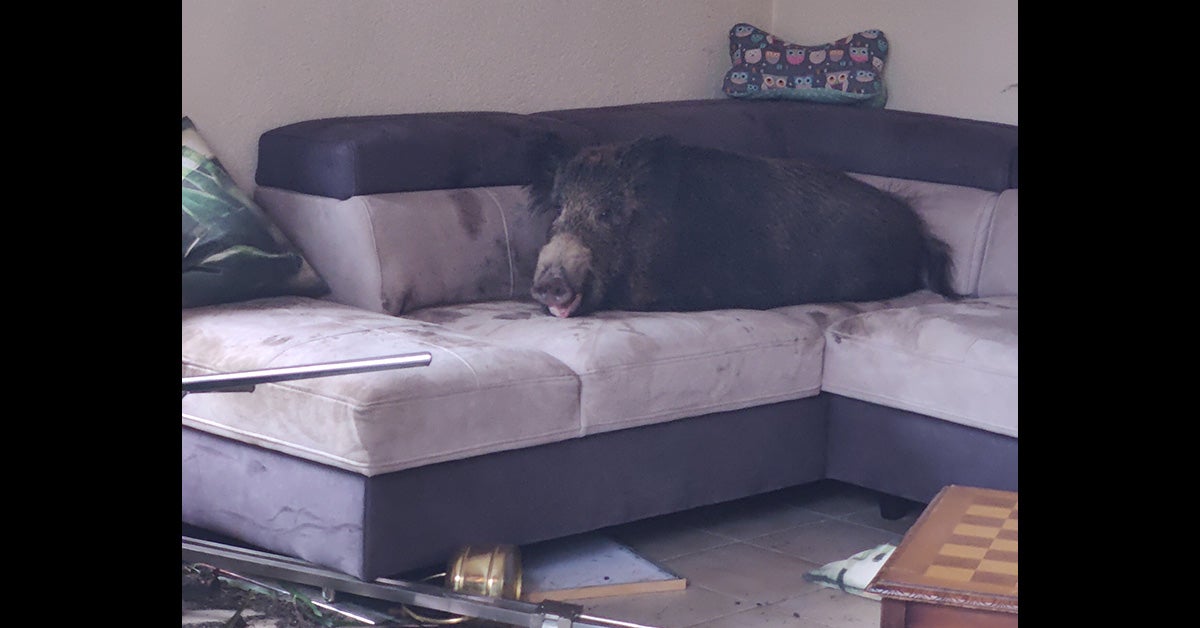 The boar was estimated to weigh 130 pounds. Hagen Police
SHARE

This is a tale that any parent of a high-school-age kid can probably relate to, but with a twist: A woman in Hagen, Germany, returned home earlier this month to find her living room thoroughly trashed, the culprit on the sofa, feet-up and utterly unrepentant. Well, the perpetrator of this domestic disaster was no surly teenager, it was a 130-pound wild boar.

On February 4, the woman entered her home to discover the lounging hog less than 10 yards away from the front door. She was able to close the door and back out of the house without disturbing the boar. She then called the Hagen Police and several officers responded to the incident. According to a press release, the officers began strategizing how to remove the pig from the premises. The solution they settled on was quite simple. They propped open the front door, and the boar voluntarily made its way out of the house and was allowed to wander “back into nature” without further incident. The police theorized that the pig got in through a patio door, which then shut behind the animal, trapping it inside.

The Central European boar is native to Germany’s forests, and hunters kill about 500,000 of them every year in the country. But conflicts with humans have increased in recent years as the wild animals become more common on the outskirts of Berlin and other German cities. A sow with two piglets made headlines in August 2020 when she snatched a man’s laptop at a lake frequented by nudists and photographs of her fleeing—computer bag dangling from her snout, naked crime victim in hot pursuit—went viral. The same group of boars was videotaped later that month raiding a children’s birthday party, where they devoured the birthday cake, as well the young partygoers’ goodie bags. So many tourists flocked to see the sow, which was christened Elsa by her newfound fans, that wildlife officials warned sightseers that the attention was endangering the safety of both the swine and themselves. Wild boars are known to spread diseases such as tuberculosis, hepatitis, and swine flu. Biologists say they can also transmit African swine fever to domestic livestock. They have been known to attack humans, especially if they begin to associate people with food.

“Wild boars can look cute. However, the imposing animals can be very dangerous,” the Hagen Police said after the surprising break-in. “At this time of year, wild boars protect their young ones from enemies. Do not approach young animals, keep them at a distance. And if one turns up in your living room, call the police!”