In this edition of The Rewind, a grizzly bear expert breaks down a viral video from 2019 that shows a predatory attack by a brown bear on an injured moose 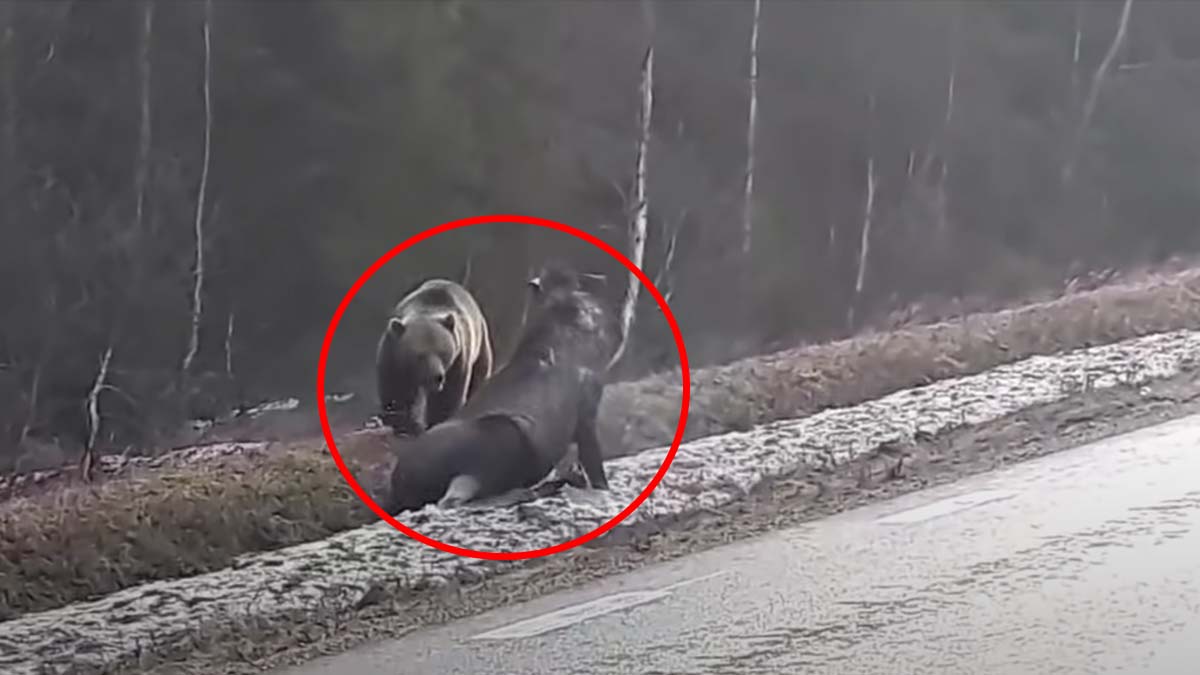 A viral video from 2019 documented a shocking predation event in Scandinavia. The short clip shows an injured moose clinging to life as an adult brown bear tears at its spine. It was captured by a man who was traveling by car between the towns of Arvidsjuar and Pitea, Sweden. The chilling footage begins with the brown bear emerging from the dark edge of a forest and sauntering up to an incapacitated moose that had likely been hit by a car. The moose attempts to stand and flee, but it can’t go anywhere. The bear latches onto its lower spine and starts to thrash back and forth.

The bear then uses the remarkable power of its jaws and neck to roll the massive ungulate down an embankment, pulling it closer to the edge of the forest. The moose—clearly weakened by its injuries—seems helpless in the face of this onslaught. It just lays there while the brown bear administers bite after bite to its head, neck, ribs, and spine. Eventually, the bear becomes uncomfortable with the proximity of the spectators filming from a nearby car and retreats into the woods. The beleaguered moose pulls itself back up onto its forelegs, and the viral clips ends.

A Bear Biologist Breaks Down the Video

“This video shows the opportunistic nature of grizzly and brown bears,” says Dan Thompson, Large Carnivore Supervisor for the Wyoming Game and Fish Department. “It’s attempting to kill through a dorsal midline bite through the spine but having difficulty doing so due to the sheer height of the moose.”

According to Thompson, adult moose don’t rank high on a grizzly or brown bear’s long list of preferred food. “These bears are true omnivores,” he says. “They have a lot of dietary plasticity. They take advantage of whatever they can get. But they’re also a path-of-least-resistance type of animal. A bear would take an injured moose like that, but it’s probably not going to mess with a healthy, full-grown moose because it’s going to be difficult, and the bear’s potentially going to get hurt in the process.”

That said, younger moose are definitely on the menu for some bears, Thompson says, but only under a very specific set of conditions. “Bears will take neonate moose but only shortly after birth—and remember how protective a mother cow moose can be. That’s something even a grizzly doesn’t even want to mess with.”

In Sweden, where this video was filmed, the brown bear population is hovering around 3,000 animals, according to wildsweden.com. The bears are distributed across the northern and central parts of the country. Of Europe’s estimated 17,000 brown bears, 90 percent are said to live in Scandinavia—a region that includes Norway, Sweden, and Denmark. The grizzly bear common to certain portions of the American West is actually a subspecies of the European and Eurasian brown bear. Though geographically separated, grizzlies and brown bears share many physical attributes, and it can be difficult to tell them apart.

Read Next: Watch a Cow Elk Chase Down and Chomp on a Gosling

Like the Scandinavian brown bear in the video, the grizzlies that Thompson studies and interacts with in Wyoming are highly effective scavengers. “They have such a keen sense of smell, and they’ll go out of their way to find carrion,” he says. “In the Greater Yellowstone Ecosystem, that was one of the first things that grizzly bears used to do when they came out of the den was look for winter-killed ungulates.”

As for what happened after the onlookers who filmed this video left the big Swedish bear to the task at hand, Thompson has a theory. “You could tell that the bear was agitated and nervous by the presence of that vehicle,” he says. “There’s several hundred pounds of meat there for it to take advantage of. I’m sure that once the car pulled away, he came back and finished that moose off and had quite a meal.”