Ken Mauldin of Steamboat Springs, Colorado shot and killed the big boar in the middle of the night on August 13 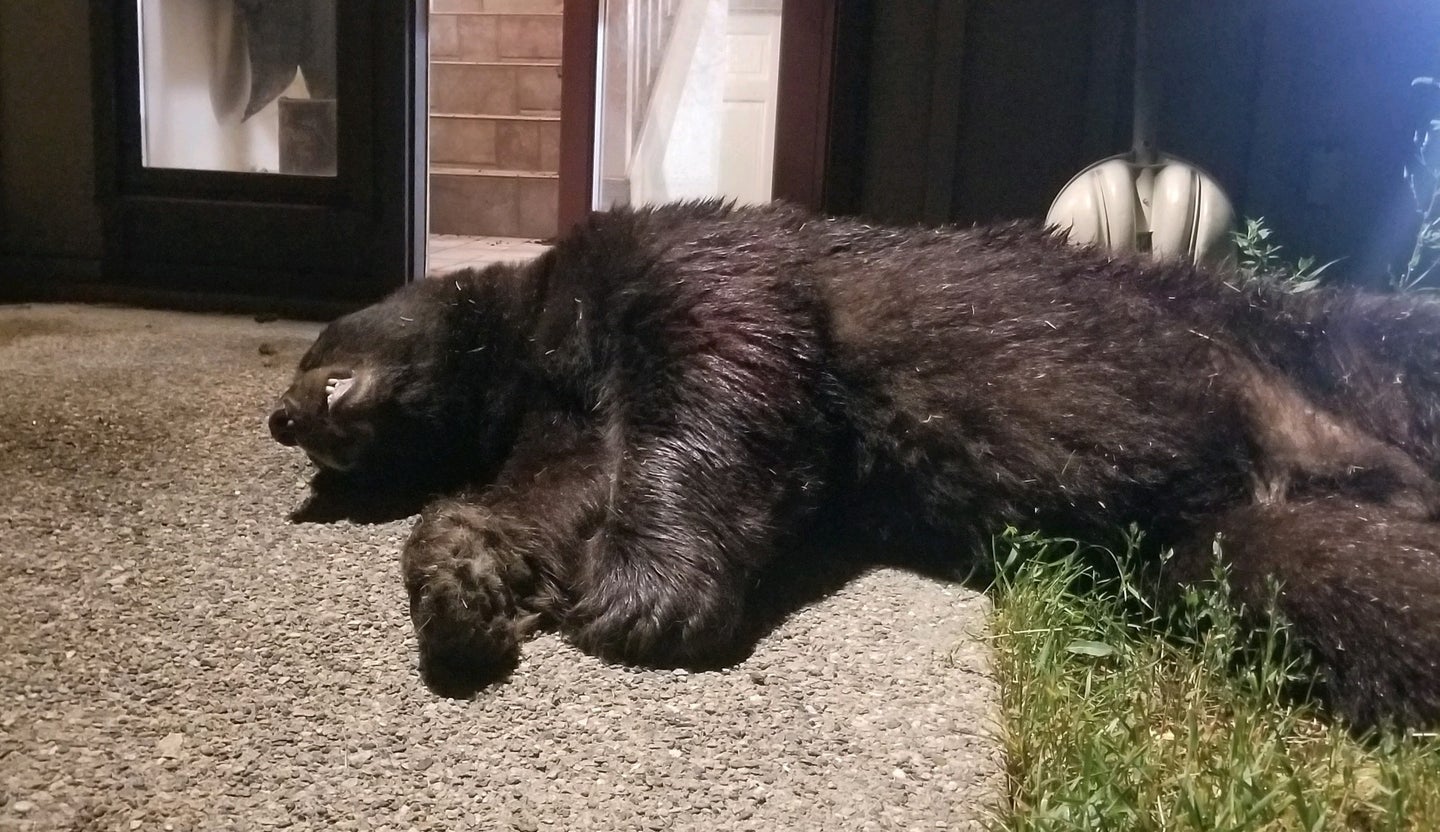 The bear weighed an estimated 300 to 400 pounds, according to CPW. Ken Mauldin
SHARE

A man in the ski town of Steamboat Springs, Colorado shot and killed a black bear that entered his home in the middle of the night. According to the Colorado Department of Parks and Wildlife (CPW), homeowner Ken Mauldin dispatched the bruin with a .40 caliber Glock handgun after it opened and walked through an exterior door.

“The door was unlocked, and it’s one of the older-style lever door handles. So, the bear pushed on that to get the door open,” CPW public information officer Rachel Gonzalez tells F&S. “[Mauldin] was alerted when his wife screamed. It was just after 2 a.m. when we received the incident notification.”

According to an incident report filed by CPW, Mauldin discharged his pistol nine times to down the bear. “It was a pretty big bear,” Gonzalez said. “It was a boar, and it was anywhere from 300 to 400 pounds.”

Thankfully, no one at the Mauldin residence was injured during the incident. As for the bear, Gonzalez says that CPW doesn’t know for sure whether it had a prior history of human conflict or food habituation. “The bear didn’t have ear tags on it, so we don’t have records of its previous activity,” said Gonzalez.

Steamboat Springs is a Hotspot for Human-Bear Conflicts

Ken Mauldin said that the incident that occurred inside his home on August 13 is indicative of a broader bear issue in his community. “We’re seeing bears that have lost all of their natural fear of humans,” Mauldin told F&S. “They’re walking through restaurants. They’re walking through hotel lobbies. They’re coming into occupied structures with large barking dogs. We have town bears here that are not afraid of people.”

He says the bear that entered his home was not deterred by yelling or his dog. “I had a 100-pound male German shepherd in the same room trying to drive that thing out of the house,” he said. “My wife was screaming, and it was just standing there. It wasn’t making any attempt to get out of my house at all.”

Located in northern Colorado’s Yampa Valley, Steamboat Springs is a remote mountain community surrounded by prime black bear habitat. In August, bears are already increasing their feeding habits to prepare for winter denning, which often leads to an increase in conflicts and encounters between humans and bears.

“Steamboat is bear country. There is always bear activity. This time of year,  you’re definitely going to see more bear activity because they are starting to put on the pounds, eating upwards of 20 hours a day to try to get 20,000 calories,” Gonzalez says. “When we make it easier for them to get food by leaving trash out or, in this case, a door unlocked, they’re gonna go for it.”

Mauldin says he hopes the incident will spark changes to reverse the rising number of bear-human conflicts in Steamboat Springs. “What happened in my house is a significant escalation in conflicts between humans and bears in this community,” he said. “If we don’t start implementing a complete bear awareness strategy, which includes scaring bears, it’s only a matter of time before there’s an even worse conflict.”