Is This the Deadliest Cat in the World?

In this edition of The Rewind, a South African zoologist explains why black-footed cats are such effective hunters 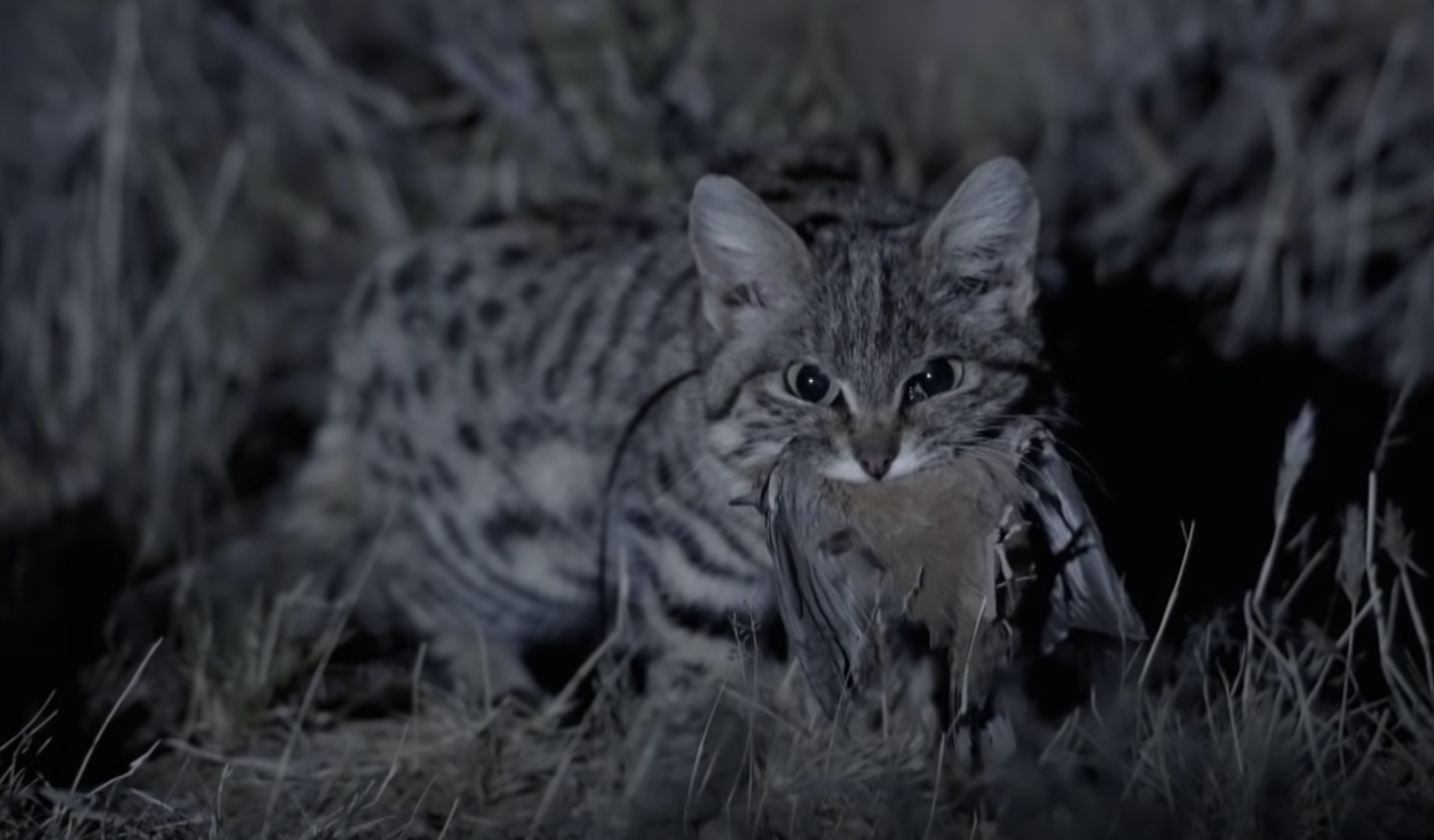 Despite its reputation as the king of the jungle, the lion is not even the most lethal killer in the cat family. Neither are the leopard, the cheetah, or the tiger. That distinction, according to a 3-minute Nature on PBS video that has racked up 14 million views since it was posted to YouTube in 2018, goes to a 2- to 6-pound predator that might not look out of place in a pet store window: Felis nigripes, the black-footed cat.

The clip, dubbed “Meet the Deadliest Cat on the Planet,” uses special surveillance cameras and a radio tracking collar to follow a female black-footed cat that researchers call Gyra as she makes her nighttime rounds in the central Karoo region of South Africa. Though she is 200 times lighter than a lion, this solitary hunter has a success rate of 60 percent—three times that of lions. The species’ hunting prowess is spectacularly displayed in the video when Gyra leaps several feet into the air to snatch a fleeing bird in mid-flight. See it for yourself below.

Zoologist Beryl Wilson, project manager of the Black-Footed Cat Working Group, confirmed that black-footed cats are, in fact, the most lethal hunters of all wild cats. Wilson says the acrobatic move was not a lucky catch but is actually one of many strategies in the cat’s predation playbook. “Both jumping and pouncing hunting tactics are used,” Wilson explains. “It depends entirely on the situation. Like most cats, they are great jumpers. However, the one thing this cat cannot do is climb trees as well as any of the other cats, including the cheetah.”

The smallest of all African cats instead relies on its ability to cover great distances, walking as much as 20 miles a night in search of food. A fascinating biological adaptation allows them to roam so far; A healthy black-footed cat never drinks water, because their kidneys are so efficient they get all the water they need from their prey. All other cats in southern Africa need to drink water, some at least twice a day, which is “a hugely limiting factor,” Wilson says. Having to drink requires those species to stay within range of water at all times. The black-footed cat’s small size allows it to move undetected through sparse habitat, but its short legs mean it works hard to cover ground and burn energy at a higher rate.

“These cats hunt every night,” Wilson says. “They have extremely high metabolisms that need to be maintained, so every cat—sometimes even in pouring rain—hunts nightly, eating an average of 8 to 16 prey items every night.” In comparison, that’s more kills than a leopard may make in six months, according to LiveScience.

Part of what allows black-footed cats to be such effective predators is that “almost anything that moves is a potential meal,” as the video’s narrator points out. “It is typically preying on readily available, small species that are usually plentiful even in arid areas,” Wilson says. “Add to this the astonishing distances they cover every night—instead of lying about or plodding around like lions—and their opportunities to encounter food increase, too.”

Their renowned fierceness is also a factor in their success. While their diet is made up mostly of rodents ( 70 percent) and birds (20 percent), black-footed cats have a well-deserved reputation for targeting prey larger than themselves. “Some of our cats have been witnessed making incredible kills,” says Wilson, who is familiar with Gyra and the research site where her hunt was filmed. “They are capable of tackling hares easily weighing twice their size, or even korhaans,” terrestrial birds that weigh about the same as the cats. “These prey items are so big that the cat cannot possibly eat them in a single go, so they cache them and come back later for an easy snack.”

Read Next:  Giant Wels Catfish Beach Themselves While Hunting Pigeons

Judging by the 30,000-plus comments the PBS YouTube video has drawn, Felis nigripes is also a cute cat. But don’t let the species’ appearance fool you: Beneath that cuddly-kitten exterior beats the heart of an accomplished predator. “They are really ferocious,” Wilson says. “An old Bushman legend describes them as being able to bring down a giraffe. While obviously not true, it is a fable that attempts to explain just how feisty they really are.”