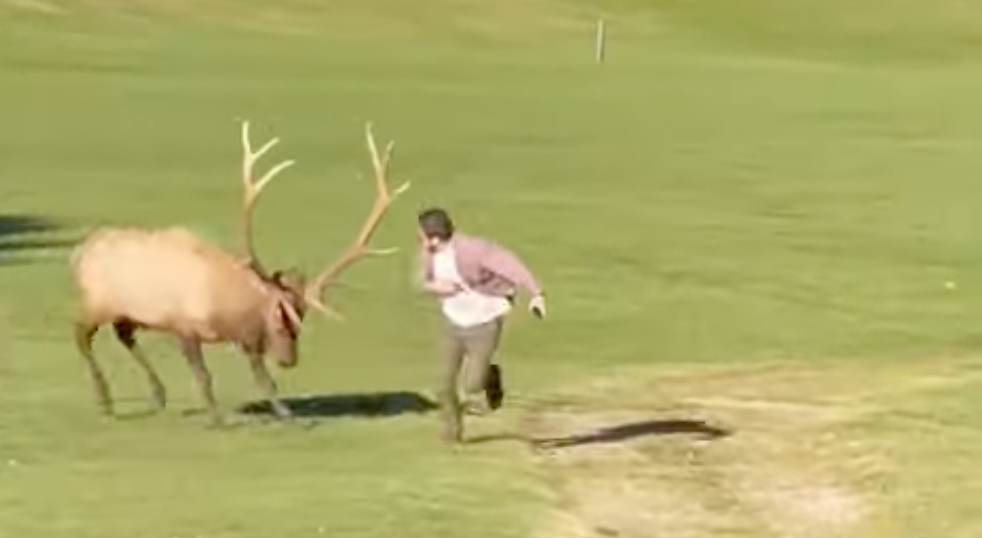 People can be—let’s not put too fine a point on this—stupid, especially when it comes to wild animals. And some people are so stupid that even when smarter people try to warn them, they just keep on being stupid. Such behavior is exacerbated by the presence of cell phones. Phones make everybody stupid. But I digress.

A woman watching another tourist get too close to a bull elk so he could take pictures with his phone knew that the situation was ripe for something bad to happen. “We were trying to get away from him (the guy), because we knew he was going to make one of them mad enough to hurt someone,” said Megan Foster, who shot the video.

But that’s where they went, because the guy really wants his photo. The event took place somewhere near Estes Park, Colorado. There are people standing near the cell-phone dude and people standing on the other side of a grassy meadow. They all look pretty casual about a mature bull elk in rut that is desperate to hang onto his harem. They’re just standing around in the open. It’s a large bull, maybe 700 pounds. It has a full rack of hard antlers that are very sharp. I would want to have at least 10 people standing closer than I was to a critter like that.

Read Next: Watch a Mountain Climber Fend Off a Furious Black Bear Attack in Japan

But I guess somebody has to be the closest and darned if it isn’t the dude with the cell phone. If anything, he appears to be trying to close the distance between himself and the agitated elk.

After enduring this for as long as it can, the elk singles him out, lowers its head, and takes a few threatening steps in the man’s direction. It’s a false charge, but the man is smart enough—barely—to flee. Then the elk returns to the stressful task of managing its herd.

And the man with the cell phone is probably too stupid to understand how close he just came to being seriously injured. Or worse.