Earlier this year, Chris Hill used his experience tracking down trespassers and poachers to save a lost child 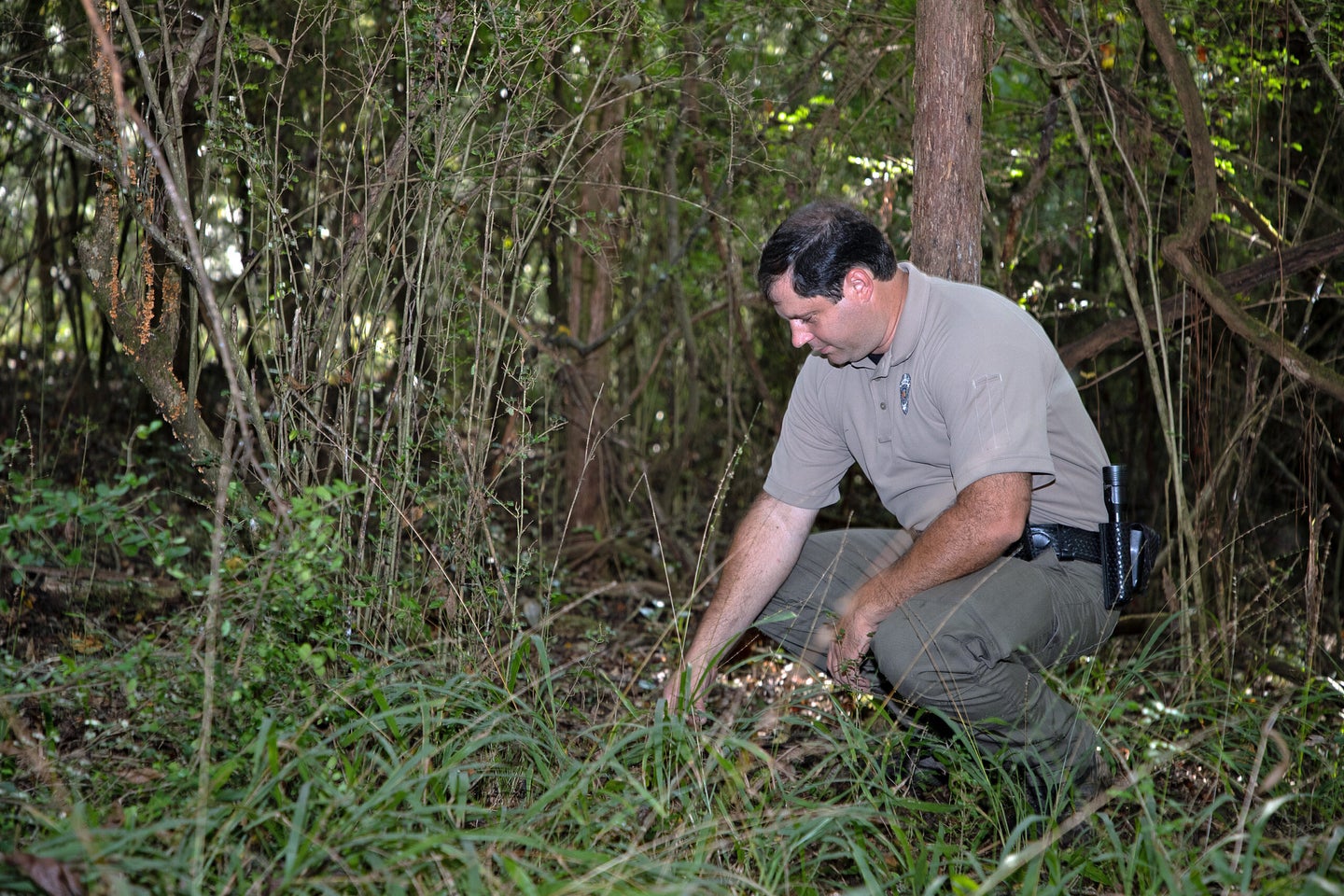 Alabama game warden Chris Hill rescued a 3-year-old boy named Eli who was lost in the woods this summer using the old-school tracking skills he developed as a lifelong hunter and honed later in his law enforcement career. Hill is a Conservation and Enforcement Officer for Alabama Wildlife and Freshwater Fisheries Division. He joined a search for a missing child in Autauga County around 10 p.m. on August 7. By then, a search crew had already assembled. “I guess it had been put on social media because there were already 100 people there,” says Hill.

The boy had disappeared while playing outside with his dog while the child’s father mowed the yard. The crews conducted a grid search, which Hill joined, but neither the search nor a helicopter equipped with an infrared thermal imaging camera turned up any signs of the boy. Then, Hill heard someone mention a key piece of information: A bloodhound had followed a trail into a hunting food plot located 500 yards north of the house before losing the scent.

“I said, ‘well, that’s the best lead we’ve got, so I’m gonna go down there and look around,’” Hill recalls. Accompanied by two deputies from the Autauga County Sheriff’s Department, he went to the plot and discovered an ATV trail running down a steep hill into a hardwood bottom. Moving slowly down the trail and scouring the ground for clues, Hill noticed some pine straw had been disturbed. A hundred yards farther down the trail, he found a spot where briars across the path were displaced as if someone walked through and snagged the vines with their feet. Another 70 yards in, where the trail opened into the hardwood bottom, Hill found a small footprint. The three searchers repeatedly shouted the boy’s name but got no response. With their flashlight batteries dying, Hill decided it was time to regroup. “I told the deputies who were with me, ‘all right, guys, we’re on the kid…let’s go get the dog.’”

But the tracking dog turned up nothing after 30 minutes of searching. “By now, it was 2:00 or 2:30 in the morning,” Hill recalls. “The helicopter, which was right over us the whole time, was low on fuel and had to go back to Montgomery. It makes a lot of noise, so if you’re hollering his name a kid might not hear you.” Wanting to take advantage of the silence and unwilling to give up, Hill told the deputies they wouldn’t walk back the same way they came but instead, would form a horseshoe-shaped search line and advance through a finger of hardwoods that ran along a creek bottom toward the boy’s house. “I was constantly calling out his name, Eli, and all of a sudden, probably 200 to 300 yards from where I found the last footprint, he hollered back. I went over and scooped him up. He was sitting on a log, with his puppy at his feet.”

Aside from some scratches on his legs, Eli was healthy and happy. “He wanted to show me his puppy and tell me about all the stars he’d been watching,” Hill says. “He wanted to go find the moon, and I told him we would. He was not scared at all.”

Hill’s Success Came After Years of Tracking in the Outdoors

Hill says the storybook ending was “definitely a lot happier” than most of the tracking jobs he executes as a game warden. “Most of the time I do find the person I’m looking for,” Hill says. “But when I scoop up a missing 3-year-old at 2:45 in the morning, it’s a different feeling than when I find a poacher or trespasser.”

Hill became a game warden two years ago after working 10 years as an investigator for the Autauga County Sheriff. He says it’s the job that he always wanted as a child.

“I grew up hunting and fishing. My dad said that as soon as I was out of diapers, I was in the woods with him,” he says. “I’ve always tracked deer and turkey, and it’s always been fun to me. When I became a game warden, I started paying attention to human footprints in the woods. I adjusted from tracking deer or turkey to tracking a man, and I still enjoy doing it.”

Read Next: 5 Map and Compass Skills Every Outdoorsman Should Master

Hill and his partner, Conservation and Enforcement Officer Jason McHenry—who uses a trained beagle to track down hunting and fishing violators—once caught a turkey poacher after a three-mile pursuit. Last year, acting on a tip, Hill staked out a subdivision street and observed a car picking up a trespassing hunter at dusk. He followed the hunter’s trail back to a tree stand and was waiting there when the trespasser showed up the next morning. “He got one foot in his tree stand, and I introduced myself,” Hill says. “It was quite a surprise to him.”

As a father of a 2-year-old and a 5-year-old himself, Hill says the case of a lost child hit close to home. The fact that the search took place in the woods made his decision to join a no-brainer. “I do my best work in the woods,” he says. “That’s where I’m at home. If somebody is in the woods, I feel like I can find them.”