Bridgett Watkins was training for the upcoming Iditarod when the bull moose charged. She emptied her handgun into the animal, but it wouldn't relent 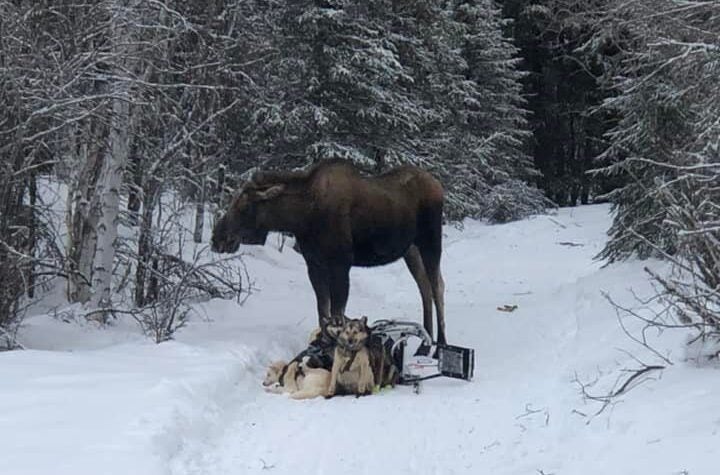 A bull moose, intent on protecting its snow-packed trail from a dog-sled musher and her team training for their first Iditarod race, trampled several of the team’s dogs. The moose withstood multiple rounds from a small-caliber handgun before being killed by a helper who arrived an hour after the incident began.

Bridgett Watkins, who along with her husband Scotty own Kennel on a Hill just south of Fairbanks, Alaska, was training with the help of friend Jen Nelson, who was on a snowmobile, when the encounter happened.

According to accounts in the Fairbanks Daily News Miner, Watkins was midway through a 52-mile training run on the Salcha River Trail System when she saw the moose about a quarter of a mile away. She stopped and let the moose run off four times. As she rounded a corner, however, the moose was still there, eating some trees about 150 yards away.

Watkins told the paper she got off the sled and walked to the front of her dog team, pulling her handgun. At first, the moose seemed non-threatening—until it turned, lowered its head, and charged. Watkins said the trail offered no protection, with thin trees to the side. Deep snow prohibited any escape off the trail. Watkins, a part-time emergency room nurse, according to reports, fired five times at the charging moose, which became entangled with the sled dogs. Watkins said she released the six dogs that had been running behind her sled with the snowmobile. Those dogs were able to flee. The dogs hooked to the sled weren’t as fortunate. The moose trampled them.

Eventually refocusing its attention to the snowmobile where Watkins and Nelson sought cover, the moose charged the machine, stopping just in front of its skis. Watkins pulled her knife, figuring it was all that was left to fight back with before realizing one unfired cartridge remained in her gun. The last bullet, fired at point-blank range, didn’t faze the moose, which retreated to the sled dogs. The bull stood over them, stomping them periodically for the next hour. Anytime a dog moved, the moose stomped it, said Watkins, provoking howls that she called, “horrific.”

“I have never felt so helpless in my life,” she said in a Facebook post. “He would not leave us alone and he even stood over top of the team refusing to retreat.”

With one bar of service on her cell phone, Watkins began calling for help knowing that any assistance would be a long time arriving. Eventually, a friend came to the scene with a rifle, killing the moose with a single shot.

The caliber of Watkins’ handgun wasn’t made clear in news accounts, but the fact that it wasn’t enough clearly wasn’t lost on her, as she added this tip at the bottom of her Facebook post: “musher advice; carry a bigger gun.”

The dogs were rushed to the North Pole Veterinary Hospital. Three received emergency surgery with one reported in critical condition soon after the attack. The rest were returned home. Friends set up financial accounts to assist with the veterinarian bills.

The moose, estimated at four years old, was taken from the scene with Alaska state troopers providing it as roadkill salvage. The Alaskan interior has reportedly experienced heavy snow and ice this year making it difficult for moose to move and leaving them hungry and susceptible to attacks by wolves. Moose routinely travel along trail networks created by humans during these times. Some people speculate the moose was defending the trail and guarding against the dogs, which it likely didn’t differentiate from wolves.

Tony Hollis, Fairbanks Area wildlife biologist for the Alaska Department of Fish and Game tells F&S that common practice when encountering moose on trails during times of deep snow is to give them wide birth and turn around instead of trying to get by them, adding the moose typically move off the trails during years with normal snowfall.

Hollis says that Watkins’ experience, while bad, wasn’t isolated—especially this year. Encountering moose on the trails has been common recently, exacerbated by deep snow. Moose really want to be on the trails, roads, or rivers, anything that can make travel easier for them.

Hollis says dog mushers, especially those operating with just dogs and sleds, can easily surprise moose, startling the big animals and triggering an aggressive response as it sees a pack of canines moving toward it.

“Moose probably don’t know the difference between a sled dog and a wolf. Moose tend to become more aggressive as winter wears on and they become increasingly hungry and stressed. Everything is amped up this year due to the heavy snow,” Hollis explains.

“Our advice is to keep as much space as you can. These moose can be stubborn. If you push them, they’ll be aggressive. When they’re like that, you might just have to turn around.”