The cougar snatched "Oakey" in its jaws and tried to run away with it. Oakey lost an eye but kept his life 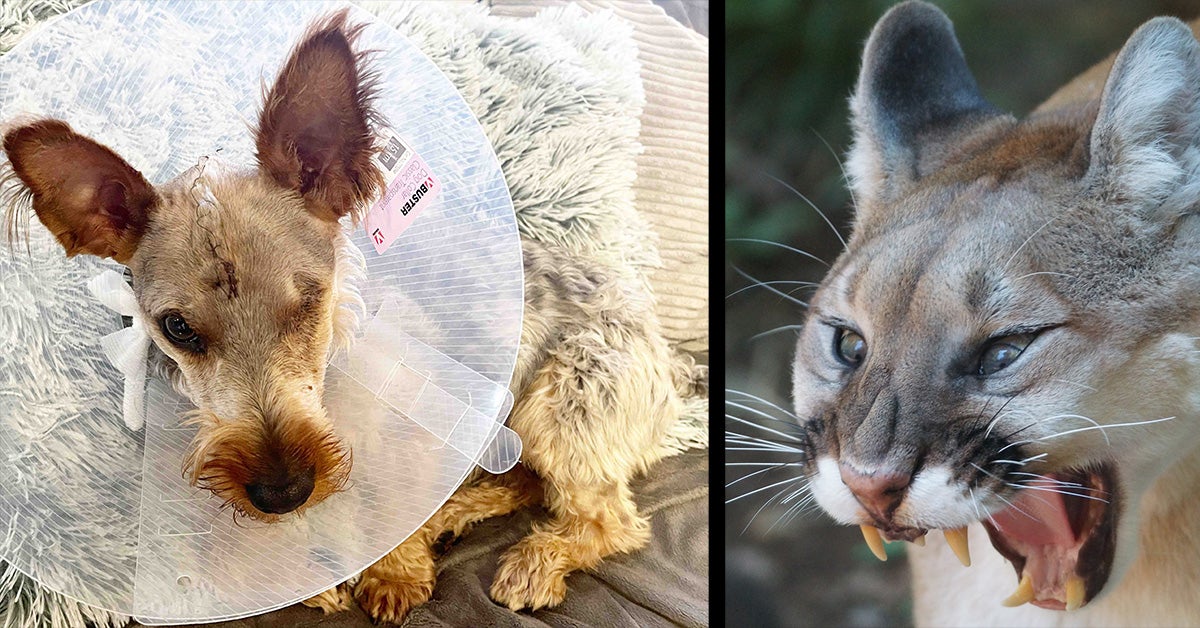 Vancouver Island is home to what's considered to be the highest density of cougars in the world. GoFundMe (left), Pixabay (right)
SHARE

Jessica Shaw and a friend were enjoying an afternoon hike when Shaw’s 14-pound dog, Oakey, who was running ahead off-leash, was snatched up by a cougar. “We heard barking and then my dog shrieking and screaming,” Shaw told CVT News. The attack happened on February 24 in Port Hardy, British Columbia.

Shaw and her friend chased the cougar and began screaming at it, trying to scare the big cat into dropping the dog. The cougar twice tried to climb a tree with the dog in its jaws, before eventually giving up. “On the third jump, he dropped my dog and ran to the top of the tree just as I got to the bottom of the tree, where my dog was crumpled on the ground covered in blood,” Shaw said.

After rushing back to the car, which took about 30 minutes, Shaw was able to get Oakey to an emergency vet, who determined the dog had sustained a bite through his left eye resulting in several skull fractures. In the weeks following the attack, veterinarians have removed Oakey’s left eye, as well as three bone fragments from his brain.

Despite the serious injuries, Shaw says Oakey has been a “tough little cookie” throughout the whole ordeal. She added the dog hasn’t been whining or whimpering and seems to be adjusting to living with one eye quite well. Oakey is expected to make a full recovery. A friend of Shaw’s has set up a GoFundMe page to help cover the $13,000 in medical bills that the dog has incurred.

Approximately 600 cougars live on Vancouver Island, which is considered to have the highest concentration of the species in the world. Black-tailed deer, also plentiful on the island, are the cats’ primary prey.

Read Next: Spike Elk Attacks Family at Park in Arizona

According to Shaw, the conservation officer who responded to the incident didn’t try to locate the cougar responsible for the attack because they had no way of identifying it. Local authorities have posted signs warning trail users about wildlife activity in the area. Shaw said she has hiked the trail in question 100 times and had never seen a cougar until this time. She vows to always keep Oakey on the leash while hiking from now on.