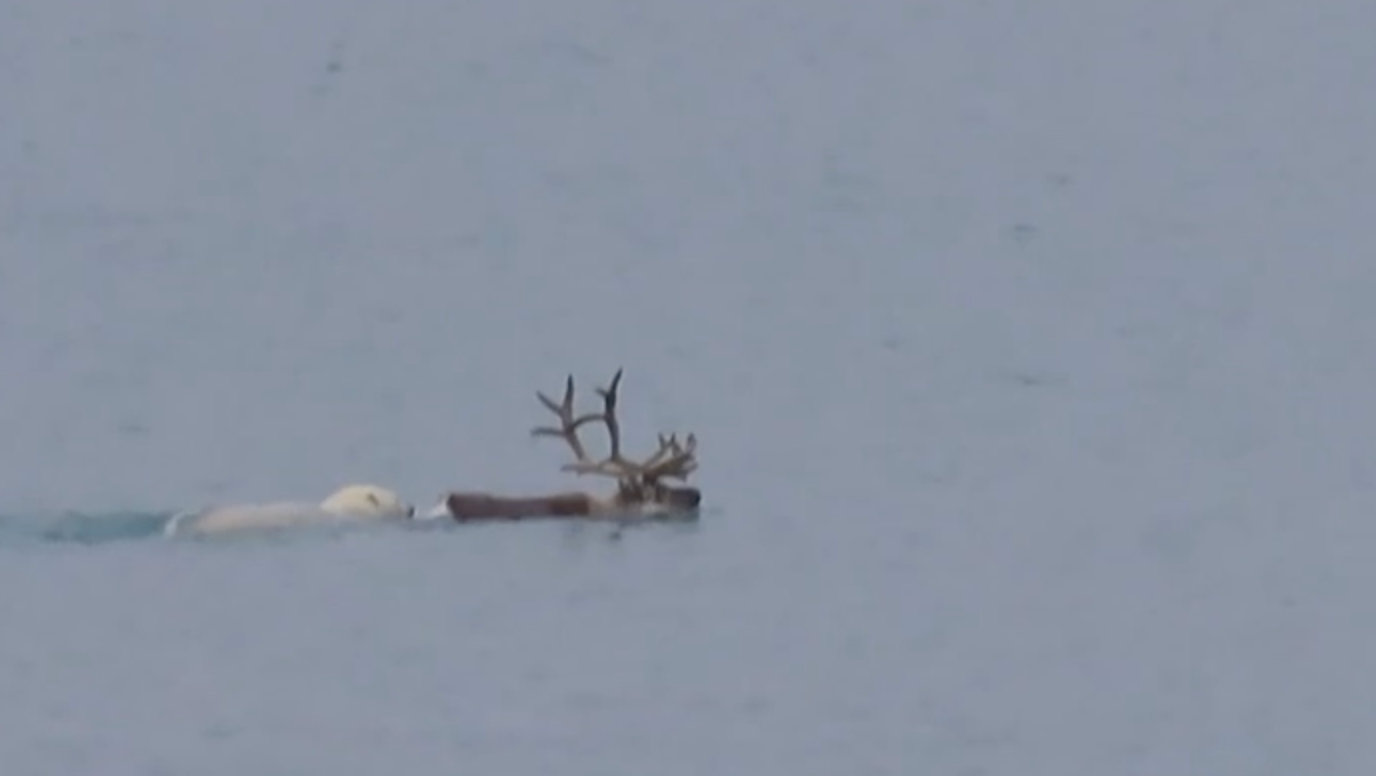 A video recorded near a research station in Norway shows a female polar bear chasing a bull caribou into the sea, swimming it down, and then killing it before dragging it back to shore. It’s the first documented evidence that polar bears can successfully prey on adult caribou.

According to Lech Stempniewicz, an ecologist and lead author on a paper called “Yes, they can: polar bears successfully hunt Svalbard reindeer,” published on October 12, 2021, in Polar Journal, researchers at the Polish Polar Station in Hornsund, on Spitsbergen Island, spotted a female polar bear on the beach in August 2020. Several Svalbard reindeer, a small, short-legged species of caribou found on Norway’s Svalbard archipelago, were grazing and resting nearby. As researchers looked on, the bear ran toward one of the resting caribou, which was an adult male in good condition. The caribou got up and fled directly into the water about 30 yards away.

The bear caught the reindeer within about 25 yards of the shoreline, sunk its claws into the animal’s rump, and brought it to a quick halt. Using its weight to partially submerge its prey, the bear grasped the caribou by the nape of its neck and immersed it completely. The animals struggled until the bear got a firm grip on the reindeer’s neck and dispatched it. The entire struggle took about a minute. See it for yourself.

According to the paper, the researchers report that “the bear then turned the reindeer over, submerging it repeatedly for about 15 minutes, even though it was already dead.” After towing the dead caribou to shore, the bear feasted on the kill for about two hours, eating about 60 percent of the bull. (Male Svalbard reindeer range from 140 to 200 pounds). After covering the carcass with stones, the bear rested nearby for 12 hours and returned the next morning to finish the leftovers. The day after that, researchers spotted the same bear in the sea with another freshly killed caribou, which it also dragged to shore and ate.

Read Next: Black Bear Kills and Eats a Deer Right in Front of Family

Researchers long believed that caribou were just too fast for polar bears to hunt. Yet, by the early 2000s, they began noting evidence of successful caribou predation. Seals have traditionally made up most of the polar bear’s diet, but scientists believe that with declines in sea ice caused by climate change, the bears are spending more time on land, which means they must rely on more land-based sources of food—like caribou.

Stempniewicz, who has worked in the Arctic for more than 50 years, told Science that he finds it especially notable that the hunt took place in the sea. Reindeer are good long-distance swimmers and runners, he says, but “in a triathlon consisting of sprinting, swimming in shallow waters with uneven, rocky bottoms, skerries, and ice floes, and wrestling, the bear is second to none.”