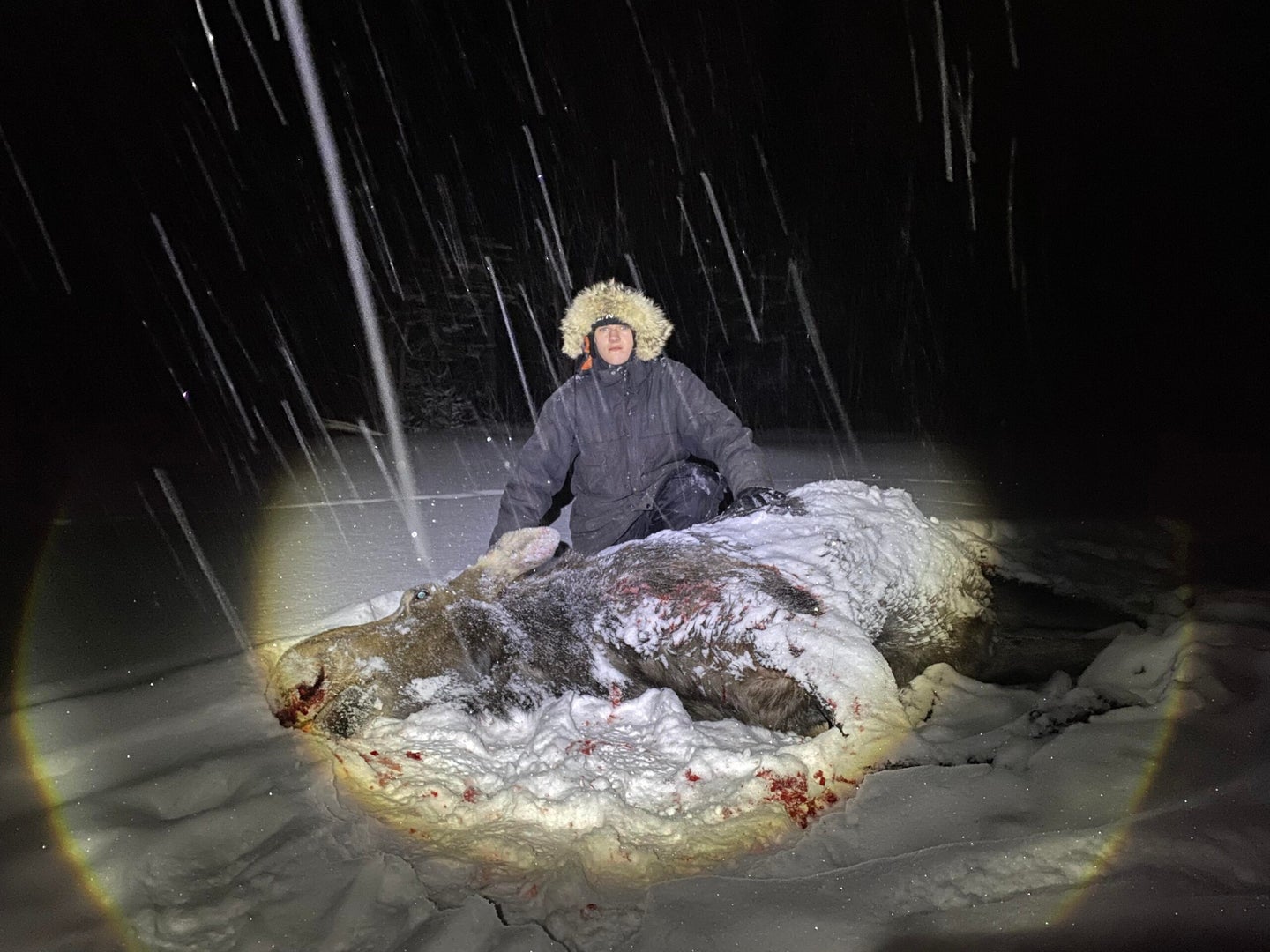 Caleb Hayes, a 17-year-old musher from Saint David, Maine, was on the home stretch of a 20-mile training run on Tuesday, March 1, when disaster struck in the form of an angry cow moose. Caleb’s father, Jonathan Nathaniel Hayes, was acting as the safety spotter for Caleb at intersections on the run and was heading down the 1.5-mile stretch of private trail to their kennel ahead of Caleb when he spotted moose tracks leading toward the dog yard. He immediately worried it was the same cow moose that had chased the team’s lead dog for more than a mile only days prior, before Jonathan was able to catch and return the dog. They’d also seen the moose half a dozen times throughout the winter.

“About 300 yards from the kennel, I stopped and waited for Caleb and told him ‘there may be a moose in the dog yard, so be careful as you go in.’” says Jonathan. “He went ahead of me, and by the time I got to the dog yard two minutes later, the fight was on.”

The moose had already begun wreaking havoc at the kennel. It had bashed the dog house of 5-month old puppies and even began trying to stomp and kick the young Seppala Siberian Sled Dog pups. Caleb struggled to hold his 8-dog team back while Jonathan drove his snowmobile between the moose and the dogs, trying to scare her off—but it didn’t work.

“This made the moose even madder,” says Jonathan. The moose charged right up to the snowmobile. Jonathan jumped off of the vehicle and retreated. “I never knew moose growled a low growl until I was on the ground on one side of my snowmobile and she was looking down on me from the other. She was raging—but we saw fear in her eyes, too.”

Jonathan has a graduate degree in biology and thinks the moose likely couldn’t tell the difference between the sled dog team and a pack of wolves. The moose turned from the puppies and had to pass over Caleb to reach the sled dogs. At that point, Caleb was still holding onto the gangline. Jonathan yelled at Caleb to run away, but he wasn’t able to.

“The moose was over me, trying to kill the dogs, and my foot got caught in the gangline,” says Caleb. “It was a foot away from stomping my face in.”

Jonathan had given Caleb a new Victoper Rechargeable LED 18000-Lumen headlamp earlier that day. Caleb says that its brightness seemed to blind the moose and potentially saved him from getting stomped. However, the moose started kicking and stomping at the dogs. Eventually, Caleb was able to get free from the gangline, and Jonathan pulled the dogs away from the moose. The moose turned its attention back toward the pups. Jonathan knew they had to do something quickly. He says he used to carry a gun, but after 20 years without incident, had become lax about it, and neither he nor Caleb had a firearm with them or at the kennel. He sent Caleb off on the snowmobile to get one.

“I felt anger and pure focus because my father and dogs were in danger,” says Caleb. “But I was trying to keep a level head and get my father’s instructions done quickly and calmly.”

Young Musher Shoots Moose to Save His Team

Caleb drove the sled about a mile away to the nearest houses. The Hayes’s kennel is not in the same place as their home, so Caleb had to knock on random houses and ask to borrow a firearm at night in the middle of a snowstorm. Eventually, he found one and brought it back to his father. But it was a muzzleloader, and neither of them knew how to operate it. Caleb again took the snowmobile back towards the homes and was able to get a new Savage .30/06 from a family friend.

Neither Caleb nor Jonathan wanted to shoot the moose, but 45-minutes into the whole ordeal, she hadn’t retreated nor shown any sign of relenting. The moose would charge and kick, then walk away briefly, then charge and kick again in what seemed to be a 5-minute cycle. Jonathan gave his son the go-ahead to shoot the beast.

The first shot’s recoil kicked the scope against and bloodied Caleb’s face. The moose was briefly downed by the shot but soon stood up again. “At that moment, I was just hit with my dumbness,” says Caleb. “When I took the breath in for the second shot, I breathed outward, slowly pulling the trigger to end the chaos. I visualized the bullet passing through the moose as I pulled the trigger.”

It worked—and the big moose dropped.

Caleb only had two rounds, so they couldn’t finish the moose off completely. Caleb and Jonathan untied the dogs and hitched them to their posts, removed the puppies from their kennel, and called the game warden.

When the warden responded to the scene about an hour later, he finished off the moose. Based on the tracks in the snow and other evidence, he verified that Jonathan and Caleb had acted appropriately and issued them a special tag to possess the moose. The father and son duo field dressed it that evening.

“I’m proud of Caleb, both as a musher and as his father,” says Jonathan. “He put his team’s needs first, even when the dogs were dragging him to the feet of this magnificent monster. Being a musher means putting your dogs’ needs before your own, and that was his first instinct.”

Miraculously, none of the dogs or puppies appear to be seriously injured, but Jonathan and Caleb are monitoring them closely for signs of internal damage. The puppies are staying at home until their kennel can be repaired. Both of the men also escaped serious injury. Jonathan says that they will always keep a firearm with them for self-defense when dog sledding from now on.

Jonathan is well-regarded in the dogsledding community. He’s the owner of Poland Spring Seppala Kennels and was recently featured in a documentary detailing a 261-mile solo expedition through the North Maine Woods that he completed. Jonathan is a former marine and says he taught his boys to shoot the same way the Marine Corps taught him. Caleb hopes to one day follow in hid dad’s footsteps and serve in the military.

“I’d say the only reason why I’m ok with the experience I had was that I’ve been training myself physically and mentally for the Marines Corps,” says Caleb. “I’m going to go in loud and proud because I know it’s in my blood.”

The training run that ended in the moose attack was in preparation for a 100-mile Can-Am International Dog Sled Race, which will take place on March 5. Despite the harrowing attack, Caleb still plans to compete with his team—so long as the dogs remain healthy.

“No sir,” says Caleb when asked whether he’s nervous about venturing back into the Maine woods.  “I’m excited to go out again. This is what I live for.”