It’s early spring—that funky time of year when the smallmouth bite isn’t dead but isn’t exactly on fire either. During... 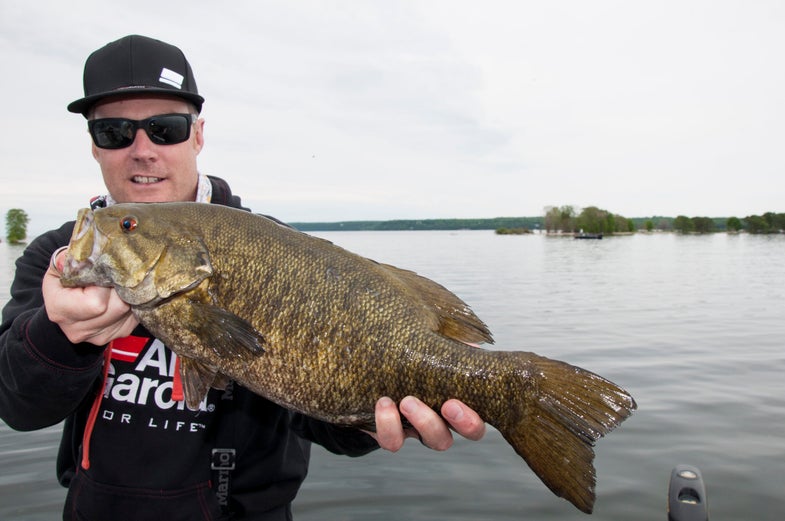 It’s early spring—that funky time of year when the smallmouth bite isn’t dead but isn’t exactly on fire either. During the prespawn and spawning periods when the water is still chilly, success with brown bass has a lot to do with patience, being methodical in your presentation, and giving the fish a meal they can’t pass up no matter how lethargic they’re feeling. The beauty of early-spring bass fishing is that while bites may be fewer, you’re a lot more likely to connect with true trophies in the form of egg-laden females looking for some solid protein before taking to spawning beds, or heavy girls protecting their beds. If you struggle at this time of year—or don’t fish at all because you don’t think the bite’s on—these tricks will help you come tight on some big bronze long before your favorite summer popper bite kicks into high gear.

Play in the Mud

During winter, smallmouths often hole up in deep water with a soft bottom, and that holds true for both lake and river fish. In the early season, you’ll find these fish in those same winter haunts before the water is warm enough to prompt them to move shallow to spawn. These bass can be glued so tightly to the bottom that you won’t even mark them on your sounder, and it’s not uncommon for fish to have mud streaks on their bellies when you catch them.

They tend to be lazy, so presenting a bait that takes minimal effort for them to eat is key. It also doesn’t hurt to choose a lure that will kick up puffs of mud as it moves, like a sculpin or crayfish, to help draw attention.

Soft-­plastic tubes shine in this scenario. Where you can get away with a long drift over a prime location, sometimes simply letting the tube slowly drag on the bottom works best. In a river where current speed or short zones become factors, quick but short vertical hops usually score bites.

Cause for a Pause

Jerkbaits are one of my favorite early-season lures. When smallies begin to transition from deep water to the shallows, these baits cover plenty of water, which is key because the bass are often cruising a large area. Jerkbaits prompt reaction strikes, which is why you’ll see many anglers working them as hard and fast as possible. It’s a great technique during warmer times of year, but in early spring, it pays to pause for a long time.

When my jerkbait first touches down, I’ll give it a few hard rips just to make it dive, but after that, I’ll let it set for five to 10 seconds without doing a thing. A suspending jerkbait works best for this method, though a floating model that rises slowly can be just as effective. The initial movement often catches a fish’s attention, but this time of year, the bass may not swim over at 100 mph to crush the lure if you continue moving it. The long pause gives any fish attracted by the initial motion time to swim over for a look. Quite often, they’ll strike at the paused bait. Most of the time, however, I find that the blow comes during that first twitch right after the pause.

Drop-shot rigs have become staples for both spawning and prespawn smallmouths because they allow you to keep a soft-plastic lure wiggling in place for a long period of time. This is very important in cold water, because it might take three minutes of subtle twitching to get a fish to commit. Likewise, a bass on a bed may circle a drop-shot rig for five minutes before finally getting ticked off enough to go in for the kill.

Most of the time, targeting bedded smallmouths is a sight-fishing game played in clear water—or at least clear enough to make out the bed. Considering that a bedded fish is going to eat out of aggression and not hunger, always choose a soft plastic that you can see, even if that color matches no natural forage whatsoever. In less than crystal-clear conditions, your only method of detecting a take from a hefty bedded smallmouth might be seeing your lure disappear for a split second as the fish sucks it in and quickly spits it back out. If you’re using green pumpkin or black or brown, the bait may blend with the bottom so much that you never even realize the fish has taken a shot. Most of the time, you can count on being able to see a white lure in water with minimal clarity, but it never hurts to carry your favorite drop-shot plastics in chartreuse or hot pink too.