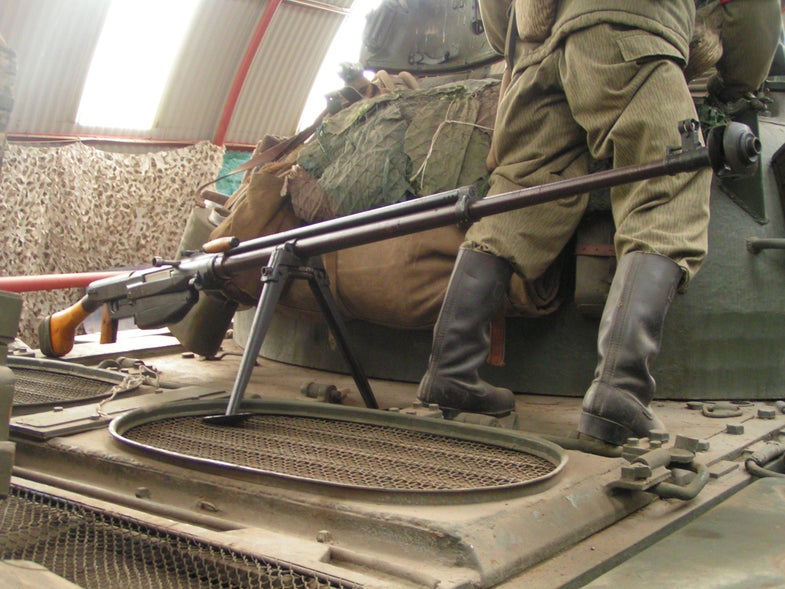 I recently came across a cartridge that I think has untapped sporting potential. It makes Ma Deuce look anemic. It could probably dump a T. rex on its butt, and for those of you who are no longer getting a thrill from your .50 BMG, I give you the Russian 14.5x114mm.

It was developed prior to World War II, and is a step above the familiar Russian 12.7mm, which is roughly equivalent to the Browning round. It’s intended as an anti-tank, anti-personnel, anti-materiel cartridge, like those two, but it packs a lot more oomph. How much? Let us compare:

The cartridge was originally employed in the PTRD, a pre-war single-shot bolt-action rifle that weighed 38 pounds. It was powerful enough to penetrate the armor of the first German tanks to bring Deutsche Kultur to the steppes, but as armor improved, gunners had to aim for eye slits and bogie wheels, and things like that. The PTRD was followed by the PTRS-41, a five-shot, gas-operated magazine-fed semi-auto that weighed a thoughtful 48 pounds. The PTRS suffered from frequent jamming caused by fouling blockages to the gas system, so the PTRD probably saw more use during the Great Patriotic War.

There are several videos on YouTube of these guns being fired, and the recoil, while stern, does not look unendurable. Here’s one:

One source that I read said the kick was not bad at all. I myself would not shoot the thing on a bet. The noise and muzzle blast are…immense.

Possibly the most alarming thing about the 14.5×114 is the sheer size of the cartridge. It looks like one of the current crop of hyper-velocity hunting rounds on steroids. It has a vast case with a sharply tapered neck and appears to be quite a modern design, despite its considerable age.

If you’re thinking of having a rifle built around this monster, I regret to report that it’s classified as a Destructive Device and requires a Class III license. In Canada, however, the 14.5×114 is a non-restricted firearm. Strange people these Canadians, eh? Try and cross the border with a handgun and they’ll send you to The Place Where Dogs Don’t Bark, but this thing is OK.

We can dream, I suppose.

In memory of Chris Franco, Maj/Inf/USAR