The other day I did something I never thought I would do again. I did not buy a corsage for … Continued 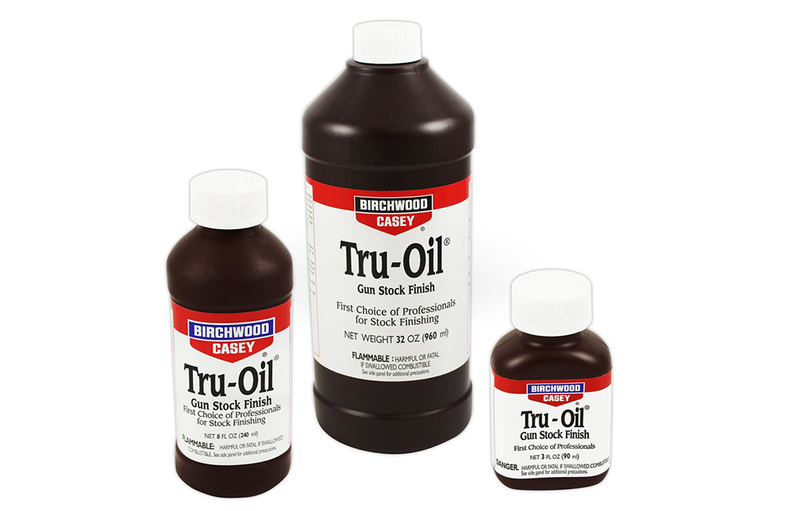 The other day I did something I never thought I would do again. I did not buy a corsage for the prom; I bought a bottle of Birchwood Casey Tru-Oil which, in case you grew up in the era of chemical stocks, is a finish for wood stocks. Actually, it is the finish for gun stocks. There are fancier finishes with loftier pedigrees and higher prices, but as far as I know, nothing works better. When I visited with Jerry Fisher, the great custom-rifle builder, I found that he used Tru-Oil cut with mineral spirits, which is quite commonly done, and as far as I’m concerned, that’s an endorsement from On High.

I didn’t need to refinish a stock, but I had one whose inletting was not completely sealed, and I learned to live in terror of this. Warren Page, who did all his hunting with wood stocked rifles, was compulsive about it. As I recall, he would seal the end grain (which soaks up water like a sponge) with water-pump grease. This was inelegant, but it worked, as water-pump grease is dense and water resistant and can even be used to lube a water pump if you have one that needs greasing.

Real wood—not laminated—is there to betray you. A really nice walnut blank is like nothing that came before it and nothing that came after it. But it’s like dating a girl whom you know will eventually break your heart, or other important body parts. Norm Nelson, who spent his career in the forestry industry when he wasn’t fooling with guns, put it best: “A tree is a pump so powerful that it can raise water from below the ground to 100 feet in the air.” And since stocks come from trees, I leave you to deduce the rest.

Finishing a stock used to be a nightmare. The really good stockers like Alvin Linden would first seal the grain with spar varnish, then sand that down so there was nothing left on the surface and then apply raw linseed oil. You had to rub it in by hand, and the trick was to get the stuff to dry, which it never really did. I’ve seen stocks done this way that you could scratch with your fingernails and peel the finish off.

Then, 30 years ago, someone invented Tru-Oil and it was the dawn of a new era. Tru-Oil is basically linseed, plus other oils, plus mineral spirits, and I’ve been told that all the non-drying elements have been removed from the mixture.

The secret to using it, if there is one, is to get the finish in the wood, not on the wood. This is why some people thin it, to make it penetrate better. You apply with your fingers, which is part of the fun, let it dry, rub it down with 0000 steel wool until there’s nothing left on the surface, and keep repeating until the wood won’t soak up any more. Then you apply one more very, very thin coat, and you’re done.

When everything was completely dry I used to apply a very, very, thin coat of Butcher’s Wax. This is not for waxing butchers; they’d probably swing at you with a cleaver if you tried. It’s made by a company called Butcher and is used for floors.

A Tru-Oil finish is weather resistant (this is the term Birchwood Casey uses, not “proof”), looks terrific, is very tough, and can be easily repaired or renewed. It’s damned near foolproof. If I could learn to use it successfully, you can, too. Also, it can’t be shipped to the state of California. This alone is reason to buy several quarts.