The Speed Trap: The Truth About High-Velocity Shells

High-velocity shells will kill more ducks and geese, right? Not so fast 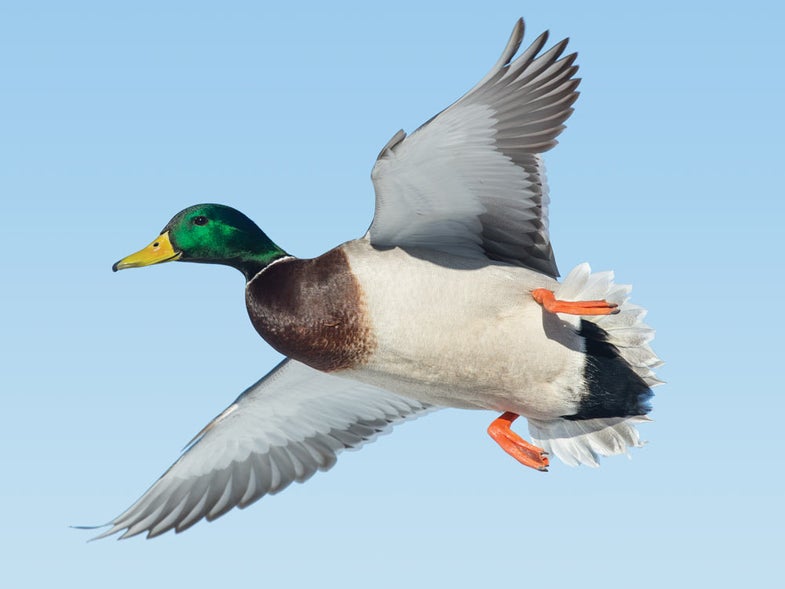 While I’d never drunk deeply of the high-velocity shotshell Kool-Aid, I had sipped enough over the years to be concerned when I saw the ammo selection for our three-day Saskatchewan waterfowl hunt. We could shoot anything we wanted, so long as it was 13⁄8-ounce Rio steel loads at 1,300 fps. How would we kill anything with pellets so slow? We might as well throw marshmallows.

Those shells dropped everything. Big ducks, little ducks, geese, and cranes fell to our dawdling pellets. I kept on shooting slow steel throughout seasons at home and had no problems at all, even with fat, 12-pound giant Canadas in the bitter cold.

We’ve all been told that speed kills when it comes to shotgun loads. The idea has been sold to us for decades that velocity is the best way to make steel shot more effective on ducks and geese. I always thought “fast enough” meant north of 1,450 fps. Now I wonder. In an effort to come up with some concrete answers about shot velocity, I joined Federal’s engineers in shooting various steel loads at gelatin blocks last spring, and I pored over data generated by the late Ed ­Lowry’s shotgun ballistics program. Spoiler alert: Speed does kill. But slower, bigger pellets are just as effective, and in ballistics, there is no such thing as a free lunch. When you blast pellets downrange faster, there are trade-offs you have to consider.

Here are my top four lessons learned, some of which may seem contradictory, but that’s because there’s more than one way to skin a goose.

Lesson No. 1: Speed kills, but so does bigger shot

The Takeaway: Yes, speed kills. All else being equal, an increase in velocity of about 200 fps is roughly the equivalent of shooting one shot size larger. On the other hand, if you forgo the extra speed and use shot that is two sizes larger (actually three, as the rarely seen B shot lies between BBs and No. 1s), the big, slow shot hits the hardest.

Lesson No. 2: Bigger is better at long range

The faster you drive a round pellet, the faster it slows down, so the most dramatic advantages of high velocity occur at shorter ranges. Studying the Lowry data, I found that at ranges up to 20 yards, a 1,700 fps load of No. 1 shot out-penetrates 1,400 fps BBs. But beyond 20 yards, the tables begin to turn, and at 40 yards and farther, the heavier BBs retain enough energy to significantly out-penetrate the 1s. Also, as a general rule, the faster the pellets are traveling, the more open the pattern, often by 5 to 10 percent, though bigger shot usually patterns tighter than smaller shot.

The Takeaway: If you feel the need to hit birds harder over decoys, smaller shot driven at higher velocity is the ticket. But for long-range shooting, your best bet is to go bigger, not necessarily faster.

Lesson No. 3: Speed kills at both ends

Part of the price you pay with increased velocity is heavier recoil—and it’s a difference you will notice. Boost the velocity of a payload by 250 fps, and you increase recoil up to 33 percent. With the really heavy high-velocity loads, the kick reaches into dangerous-game-rifle territory of 50 to 60 foot-pounds of energy. Ducks and geese aren’t that dangerous. They can be hard to hit, however, and added recoil makes them harder yet.

The Takeaway: Fast loads aren’t deadlier than slow ones if they make you flinch or pull your head off the stock and miss the target.

Lesson No. 4: More speed equals less lead—but not much less

Manufacturers tout shorter leads as a benefit to high-velocity shells. And it’s true. On a 90-​­degree crossing shot at 40 yards, No. 2 shot at 1,700 fps requires about 10 inches less lead than the same shot size at 1,450 fps. But most hard crossers are missed by feet, not inches. At closer ranges and gentler angles—the shots most hunters can hit—the difference between standard- and high-velocity leads is minimal. Plus, larger shot also reduces the time of flight to the target and the necessary forward allowance—not by as much, but enough to further lessen an already small advantage.

The Takeaway: If you’re pass-shooting and you’re good at it, extra velocity may help you hit more birds. Otherwise, it probably won’t make a difference.

Shooting into gelatin proved that with pellets of the same size or nearly so, more velocity does increase penetration. But not as much as sticking with the slower speed and going up two shot sizes.

In the end, high-velocity loads do hit a little harder inside 20 yards, but they’re not the clear-cut solution they’ve been made out to be. Achieving more clean kills with steel is all about understanding the benefits and trade-offs of different loads and choosing what works for you in specific situations.

Go faster and smaller for birds over decoys if you have trouble making clean kills. You’ll hit them harder with more pellets, and as a bonus, your patterns will be slightly more open and easier to hit with. If you pass-shoot, you might go both big and fast to maximize energy and shorten leads, as long as the added recoil doesn’t make you whiff shots you’d otherwise make.

That said, I have been surprised by the effectiveness of slower steel since I started shooting it again. For me, in most situations, choosing bigger pellets at slower speeds is the way to go, because it increases energy without boosting recoil. So, slow down, take it easy. Pick shells in the 1,400 fps range, give or take, and you’ll find that most of the time with steel shot, big, slow, and steady win the race.