Tsetse Fly: The Worst Bug in the World

Back in 19 and 87, I was sitting by the evening fire of a hunting camp on the Luangua River,... 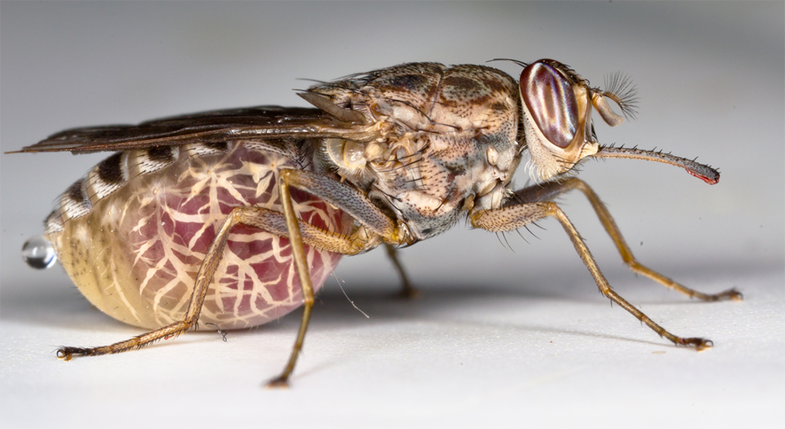 The tsetse fly wants your blood, and it will get your blood. Oregon State University
SHARE

Back in 19 and 87, I was sitting by the evening fire of a hunting camp on the Luangua River, listening to the hippos fart and a visiting professional hunter describe the fine time he had that day baiting one of Zambia’s innumerable roadblock guards (Note: If your PH does this, get a new PH.) when a white hot coal leaped from the fire and landed on the inside of my right ankle. Except it was not a coal; it was a tsetse fly that had bitten me and hit a nerve. I ask you, how many bug bites have you gotten that you can remember vividly 30 years later?

Happy Myles said that tsetses are treacherous. With all due respect, they’re not—they’re very straightforward. They want your blood.

And they will get your blood, because you won’t be able to keep them off.

And that’s about all there is to it.

Tsetse flies have been around for at least 34 million years, and evolved to dine on triceratops and T-rexes. They’re equipped with a proboscis that could drill through those hides, so what do you think you’re going to put in their way? Conceivably, you might wear enough clothing to keep them off, but you’d die from heatstroke.

There are 23 species of tsetse fly that live in 4,000,000 square miles of sub-Saharan Africa, which they keep pretty much cattle free, courtesy of a disease they transmit called nagana. This, in turn, makes it possible for game animals to live in these areas, for which we must all be thankful. Tsetses also transmit sleeping sickness, whose proper name is trypanosomiasis, and which, if left untreated, is 100 percent fatal, but if you catch it in time you can be cured of it. Only a small percentage of the flies carry it, so the chances of taking it home from a safari are scant to say the least. I’ve never known anyone who got it, or even heard of anyone, but plenty of people get malaria in Africa.

If you’re investigating a safari, you want to ask if you’re going into fly country. If the answer is yes, the hunting may be better than where they’re been eradicated, but you’re going to get bit. For some people, tsetse bites are no worse than mosquito bites (unless one of the little fiends hits a nerve), but other people are allergic to them, and this can be a real problem.

The more these folks are bitten, the more sensitized they become, and small, pale red bites that itch a little bit become large, angry-red welts that itch furiously. They can get so bad that you’ll have to hide in your tent for a couple of days, and thoughtful safari outfitters provide their camps with antihistamines and syringes for the really bad cases.

If you suspect that you may be among the Chosen, have a doctor prescribe some serious antihistamines and start taking them before you get to fly country.

In places, tsetses are so bad that even local residents can’t endure them. PH John Knowles told me that the early English explorers of Africa got into fly belts so awful that they’d shoot an animal, cut it in half lengthwise, and carry the bloody carcass on their back to decoy the flies off them. If you slap a tsetse fly it will not do much good, as their bodies are surrounded by a hard carapace that was probably dinosaur-tail proof and is still effective today. The proper way to do it is slap and roll—a firm whack with your hand, and then you press and roll the insect for a foot or so. That usually puts paid to them, as the British say, or if not, you can pluck off a wing and release it. This sounds cruel, and probably is, but let them work on you for a week and see how you feel about it.

In the end, we should not feel too unkindly toward the tsetse. They were here before we were, and will probably be here after we’re gone, and are one of the main reasons that all the game in Africa has not been killed for meat and tourist souvenirs.

And besides, what have mosquitos done for us lately?