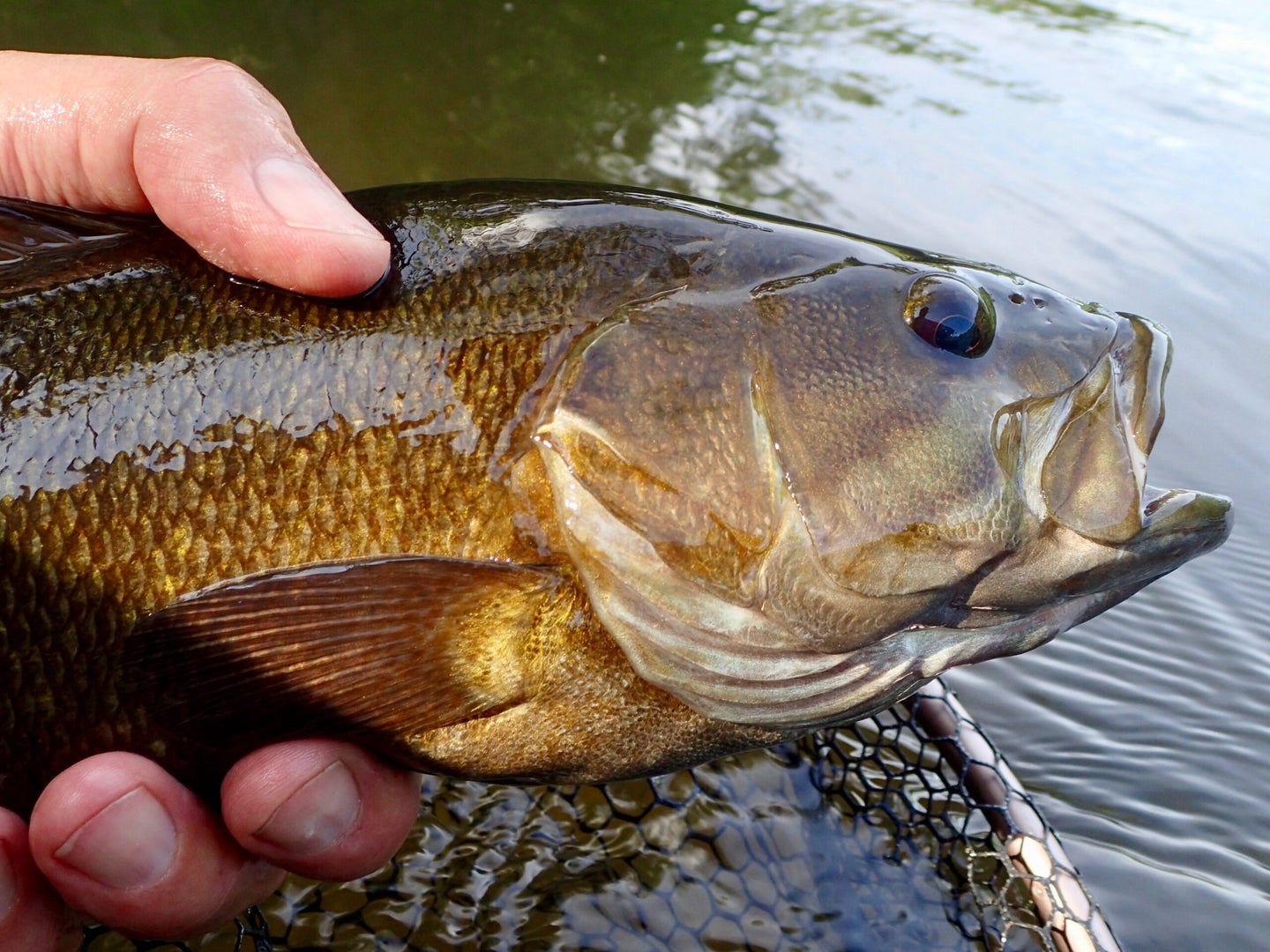 These patterns have the right amount of flash, wiggle, and action to trigger strikes from smallies. Steve Culton
SHARE

This started as a “best” list. But best is a slippery slope when it comes to fly patterns. Frankly, the best flies are the ones that the fish will eat at any given moment. Or, you could argue that the best flies are the ones in which you have the most confidence. Smallmouth bass make a best flies discussion even more complicated. Dolomieu aren’t known as a fish of a thousand casts. In fact, there are times when it’s downright impossible to keep them off your hook. So instead I decided to choose eight smallie flies that I can’t live without. These are all high confidence patterns that are consistent producers. Some sit on the surface. Others will plumb the depths of your favorite river. Still more swim below the film. Wherever the fish are feeding, you can count on one of these bugs to get you tight to bass.

What a horrible-looking catastrophe! Is it a crayfish? Salamander? Baitfish? Who knows what smallmouth think the TeQueely is. One thing’s for sure: this pattern is loaded with bite triggers, from quivering legs to undulating marabou to flash to high contrast. A mutant Woolly Bugger on steroids, the TeQueely sinks just enough to reach smallmouth in a comfortable feeding zone. (Switch the brass bead for tungsten if you want more depth.) This is a fantastic searching pattern, whether you’re picking river pockets or covering larger riffles and runs.

A true-life Frankenstein’s monster of a fly, the 4-inch Countermeasure sports a Zonker-like tail, a body and legs you’ll find on many streamers, and a deer-hair head and collar reminiscent of Kelly Galloup’s Zoo Cougar. Clearly, the designer—me—wasn’t going for originality. I wanted a bug that I could land with a splash; dead-drift and let the current influence its many moving parts; or strip and create a commotion in the film. Its name comes from the device used by submarines to fool enemy torpedoes into acquisition. It does the same job on smallies—they’ll go out of their way to hunt down this fly. I like to pound the shallows with the Countermeasure as late afternoon transitions into dusk. Every year, it produces some of my biggest smallmouth.

Jack Gartside’s classic bass bug needs no introduction. You see so many variants of this fly, though, that I thought it was important to include Jack’s original recipe, including the stripe of flash over the carapace. For years, I fished the Gurgler with an active presentation—it really does gurgle along the surface. Then I discovered the magic of letting the fly land with a plop, and then doing…nothing. If you’re fishing still or frog water, try to let the landing rings dissipate before you animate the fly. Often, you can’t—smallmouth will attack the Gurgler before you can begin your first strip.

Wigglies changed my fly fishing life. It was the summer of 2020 drought and Connecticut’s Housatonic River was painfully low and slow. The bass were hunkered down, easily spooked, and not prone to wanton attacks on surface bugs. Enter Ol’ Mr. Wiggly. You might think this fly needs to be waked or stripped, but I found the most lethal presentation to be an entirely passive one. Cast, dead drift, mend, and if you add motion I’ve heard it best described as a touch delicate enough to move only the legs. Ol’ Mr. Wiggly was a revelation in smallmouth ambush habits. Time and time again, bass crushed this bug as it dead drifted through gin-clear shallows where I thought no bass had a right to be.

Fran Betters’ classic is renowned as a trout-catching machine. But it works just as well on smallies. Whatever the bass are keyed on—Isonychia, white flies, caddis, sulphurs—you can easily match the hatch with The Usual by changing the fur color and hook size. If bigger smallmouth are in the mix, you may want to go with a 2x strong hook. It’s an easy pattern to tie, so make sure your box is well-stocked. I’ll go through a dozen of these during a white fly hatch.

This Tommy Lynch masterpiece is aptly named. It staggers through the water, giving a highly convincing performance as wounded, disoriented, vulnerable prey. The key to its design, says Lynch, is its wedge-shaped head, paired with a down-turned hook eye, which produces an action not unlike a crankbait. Besides its unique movement, there’s also plenty of flash and a rattle to ring the dinner bell. Every year, some of my biggest smallmouth fall victim to the Mini D&D. You can tie this fly in any color scheme you can imagine. Lynch includes eyes in his recipe; I don’t use them, and the bass don’t seem to mind. Fish the Mini D&D on a floating line for surface/film action, and with a full-sink tip for a neutrally buoyant effect.

Soft hackles are an underutilized fly category for smallmouth. Anglers tend to think of smallmouth flies as mostly streamers and smallmouth diet as larger protein payoffs. But there are times when the bass will key on smaller bugs and hatches to the exclusion of all other foods. Many smallmouth rivers in the northeast enjoy prodigious white fly hatches; even then, anglers focus primarily on fishing dry flies. Try fishing under the hatch with a soft-hackle like the August White, and everyone will want to know your secret. Use this simple template; change the hook size, and hackle, body, and tail color, and you can match just about any hatch. Pro tip: try dropping a soft hackle off the bend of a dry fly.

I don’t know who created this fly, but it’s pure genius. Part nymph, part streamer, you fish the fly like both. Use a longer Euro-style leader, 20-26 feet, with a built-in sighter. This kind of leader helps the fly get deep fast—just cast upstream, raise the rod, track its drift, then start hopping it along the bottom. You may find the sighter redundant—most of the takes I get are firm tugs on the drop. If you get no takers, strip it in (hold on, though) and repeat. You can tie this in any color; I like black with a silver bead, white with a pink bead, and crawfishy colors with a copper bead. Use a larger hook and heavier bead for higher/deeper/faster water.

Steve Culton is a guide, speaker, fly tyer, and outdoor writer who lives in Connecticut. His website is currentseams.com.