Not only are these add-ons annoying, but they jack up the price of guns, too 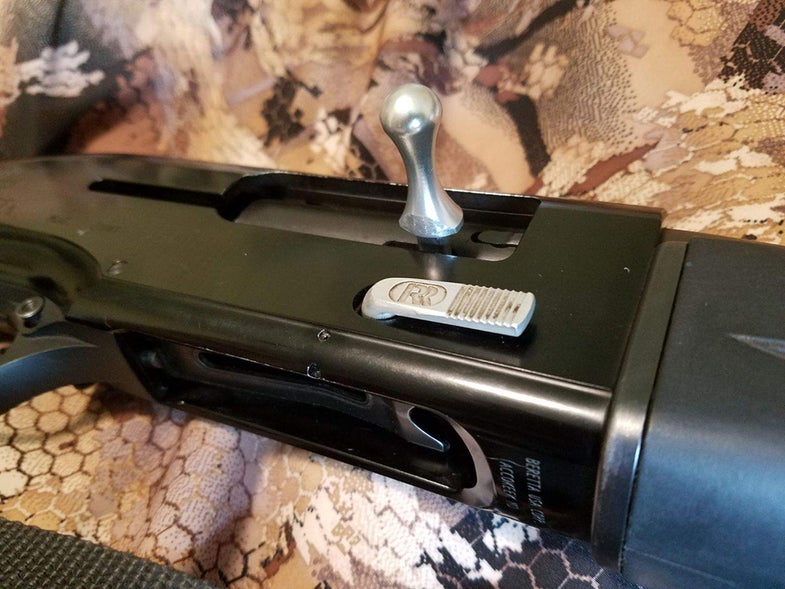 An enlarged bolt handle and release on a Beretta 3901.. Phil Bourjaily
SHARE

It’s a thing now to put an enlarged bolt handle, an enlarged bolt closer button, and a big fiber optic bead on semiautos and call them “waterfowl specials.” Sometimes the loading port has been enlarged, too. These “improvements” have crossed over from 3-gun shooting, where they are, no doubt, highly worthwhile. As extras on a waterfowl gun, in my opinion, they are unnecessary, even annoying. As a bonus annoyance, they usually add to the price tag, too, letting you pay more for what is, arguably, less.

Fiber Optic Beads: These are completely unnecessary on guns made for wingshooting if you’re looking at the target as you should be. And, they are easy to break or lose. They can distract you and make you aim the gun consciously, which is why the trend among a lot of sporting clays shooters is to remove the beads from their guns entirely. Having started shooting with an Auto 5 that had lost its bead, I can relate—although I haven’t pulled the beads off my guns yet. I do like a front and middle bead if there’s a chance I’ll use a gun for turkey hunting. But the front bead doesn’t have to be a glowing piece of plastic when it can be brass instead.

Extended Bolt Handles: Extended bolt handles are supposed to make it easier to open your gun with cold, gloved hands. No one’s hands get colder and weaker in the field than mine, yet pulling open a bolt is never a problem. What is a problem is storing a gun with an extended bolt handle in a gun safe or cabinet. Regular semiauto bolt handles are likely to scratch or gouge the gun next to them if you’re not careful putting them in and out of the safe. Enlarged handles make that problem worse. You need to leave an empty space next to your semiauto or you’ll mar the gun next to it. I suppose you could pull the handles out before you put the gun away, but why even have to worry about it?

Enlarged Bolt Release Buttons: I love these for target shooting; hate them on hunting guns. A friend borrowed my Beretta 3901 for an extended period, and by way of thanks, he put an enlarged bolt closer on it when he gave it back. I appreciate the gesture but quickly grew to detest the bolt closer. In the field, it takes just a little bump, and the bolt I have opened to show my gun is unloaded clanks shut. It happens all the time when I carry the gun in a soft case, too, and I’d much rather take the gun out of its case with an open bolt so I’m 100 percent sure it’s unloaded. Besides which, we all carry enlarged bolt releases in our pockets. They are called “extra shells.” You drop one shell into the port, then hit the button with the end of the next shell, closing the bolt before you slide the extra shell into the magazine.

Honorable Mention—Camo Finishes: These do not come to us from 3-gun, but don’t really help us hide that much better than any dull finish, and they tend to wear poorly. I will make exceptions. This spring I bought a Mossberg 835 for $175 purely because it was factory dipped back in the 90s in Original Realtree and I thought it was retro and cool. But, I wouldn’t pay extra to get camo on a new gun if I could get in black for less money or wood for the same price instead, as is often the case.

Extras I love include enlarged safeties, soft recoil pads, and, for duck and turkey guns, sling swivel studs. Those are worth paying extra for.