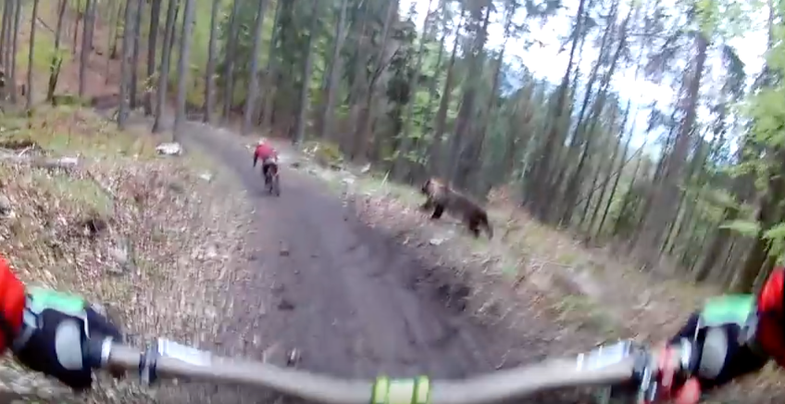 As fast as the bear ran toward the biker, it veered back into the woods and left.. Dušan Vinžík
SHARE

A mountain biker riding a trail in Slovakia nearly collided with a charging bear—and the biker’s friend caught the harrowing ordeal on a helmet cam. He later posted the footage to YouTube.

In the clip, the bear enters the shot from the right just as the first rider passes. The second rider, Dušan Vinžík, who is wearing the helmet cam, starts yelling as the bear starts to pursue his buddy. Regardless of the language barrier, the panic in his voice is unmistakable. The bear eventually changes course.

Though an encounter like this is rare, it is not unheard of. Last summer, U.S. Forest Service officer Brad Treat died when he ran into a grizzly bear while mountain biking in Montana. Treat was going an estimated 20 to 25 mph when he came around a blind curve and encountered the bear.

“The main thing is to slow down in places with little sight distance, meaning you can’t see very far,” bear biologist Chris Servheen told USA Today, in March, after the findings of the Treat case were released. “When the trail is thick with vegetation or has curves, we recommend you slow down and shout when approaching blind curves. Speed and noise are the factors that get people when they’re out on their bikes. They’re moving faster and quieter.”

There are several fake videos on the internet of bears chasing bikers, which Field & Stream has reported on, but the incident in Slovakia is no joke.