Could you stare down a mountain lion? 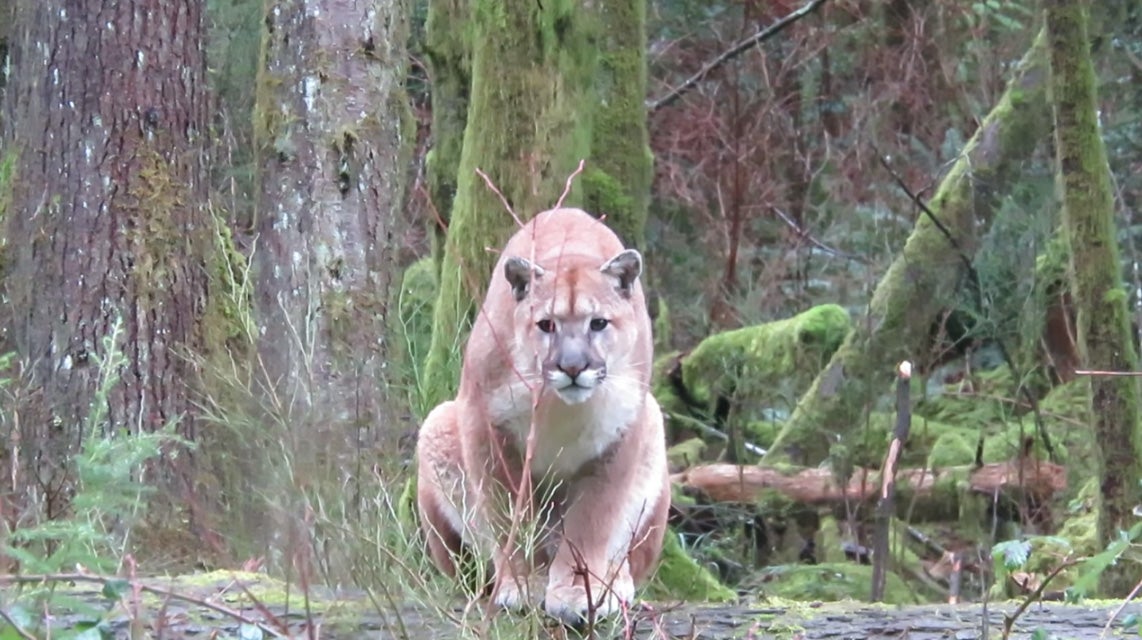 A large tom takes his time deciding what to do about the human intruder in his territory. From YouTube
SHARE

The first things you see and hear in the YouTube video are a large, healthy mountain lion staring intently at the camera and the voice of shed hunter Adam Bartsch on Vancouver Island saying, “I just found a shed antler and there’s a monster, monster tom at 20 meters looking at me. A monster tom cougar. And, no, I don’t have a gun. I have nothing. And he is huge.”

There are several remarkable things about this moment. It really is a big cougar. Even its forepaws look thick. It’s so close you can see individual whiskers. And it is staring straight at the guy from a crouch, wondering—it seems to me—whether it has just found lunch. Another thing is how steady the camera is. And the guy’s voice is steadier yet. The cat has his attention, but he isn’t panicked. Let me just note that I doubt I could pull that off.

Then he says something that sounds like, “Holy snappin’ arseholes. How cool is that?” This has been uploaded by an outfit named She Hunts Productions, and at 38 seconds a soundtrack of tense instrumental music kicks in and doesn’t let up for the rest of the video. (To be fair, the woman who posted it, apparently Mrs. Bartsch, notes in the comments that it was 1 a.m. and she really just wanted to go to bed.)

Cut to the cat watching him with its paws on a downed tree. At 1:40 of the 5-minute video, the cat gets atop the tree, as if readying itself to charge. It sits there like a coiled spring for a full minute. It starts to rain a bit. At 2:40, the animal sits up and turns sideways for about 10 seconds, then gets down on the far side of the log. Cut to a scene of the cougar on the ground, even closer, now 15 meters away.

At 4:40, Mr. Bartsch—more in wonderment than fear—says, “Fifteen meters away from me. Look at him! Just eyein’ me up like I’m a blacktail deer.” But the guy is not entirely unarmed. He’s found a shed antler. Unfortunately, blacktails aren’t known for their large antlers. So if the cat charges, it may not be the best deterrent. At 4:46, Mr. Bartsch decides he’s had enough. “I think it’s time to get rid of him,” he says. “Shhhhht,” he hisses. “Go on, get outta here. Shhhhht.” He doesn’t even say it particularly loudly. But the cougar turns and starts to walk away. “He’s not exactly running away, is he?” says Bartsch. “He’s right there.” But it’s pretty clear the animal isn’t going to attack. The video ends.

The armchair experts weigh in in the Comments below the video. If the animal had truly been stalking him, he’d be dead by now. The animal was stalking him but didn’t know what to make of him. The guy was a moron and should have been carrying a gun, bear spray, or big knife. He should have shot first and asked questions later. This is why you should never go into the woods unarmed. He was the one stalking the cougar, invading the cougar’s domain. And so on. Actually, the comments are more enlightened than those on many similar videos.

My read? This guy had the single most important thing you need to survive an encounter with an apex predator. Self-possession. He never says whether he thinks the animal is simply curious or is eyeing him up as prey. Once it got within 15 meters, however, he decided to let it know he wasn’t lunch and did so without any particular drama. And the animal left.

As I noted, I seriously doubt I’d have had that much presence of mind myself. But I do aspire to it.

Another Close Call From Stalked By A Mountain Lion

IT WAS opening day, and around 4:30 p.m. my dad and I saw a cow crossing a field. We decided to split up, and after sitting for about half an hour, I heard a tree branch crack. I thought the elk was coming. Five minutes later, I turned around and this mountain lion was standing there, about 25 yards from me.

We stared at each other for what felt like a long time but I’m sure was just 20 seconds. What really struck me were its piercing, yellow-green eyes. At first I tried to make myself big by kind of throwing my arms in the air. But the lion just put its head down, hunched its shoulders, and started walking toward me. It kept its eyes on me the whole time, and I thought, I’ve got to shoot this. Once it came within 15 yards, I felt my face get hot. I knew I’d better hit it the first time or else I’d be a goner.

I picked up my gun, put it right behind its shoulder, and fired. It jumped up and started clawing at itself. I shot again and it dropped to the ground. After a third shot, it was still moving, so I shot it one more time in the shoulder. Then I ran to the road and fired a warning shot to my dad–I was worried he might run into some cubs or another mountain lion. After that, I just sat down.

I couldn’t yell or cry at first, I was so shocked. I’d never seen a mountain lion before. My dad arrived thinking I’d shot the elk, but he saw how white my face was and knew right away that something was off. We left the lion where it was and called the game warden.

The next day we went back with the warden, and he asked me to walk him through it and examined the cougar. Even though lion season was closed, my kill was ruled justifiable. He said it is really rare that mountain lions show themselves unless they’re hungry, and told me I did a good job.

I’m lucky I didn’t panic. It’s still scary going out in the woods by myself. But it’s a cool story to pass on.