Video: Rare Footage of a Mountain Lion Taking Down a Deer 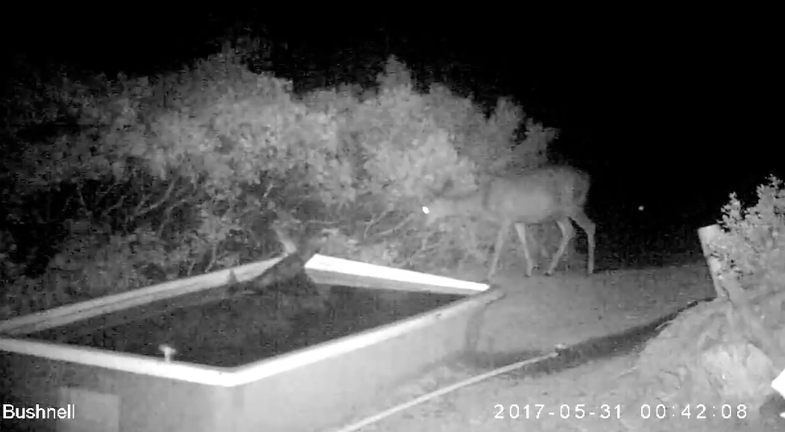 The rebounding of California’s mountain lion population has been well documented, and it’s no secret that the predators are making meals of area wildlife, and domestic pets, to sustain their numbers. But a trail camera, belonging to Randy Spade of Whitmore, Calif., captured a sight rarely seen—a lion taking down an unsuspecting deer.

Spade, a lifelong outdoorsman and an ardent deer hunter, has the cameras set up on a ranch owned by one of his dad’s old hunting buddies. Spade visits every Sunday to replace empty batteries and swap out full memory cards, and then he eats dinner with the landowner while scanning the week’s footage. “Bears are the main thing we see,” he said. “Summers are hot up here. We have 30 to 40 days in a row of 100 degrees, and bears love taking a bath in those old watering troughs to cool off.”

But on June 4, Spade didn’t find bears on the footage, while scanning clips from a watering hole where he’d seen a buzzard circling earlier in the day. In the video, which you can watch above, a deer walks into the shot, triggering the camera to record. Moments later, the eyes of a mountain lion slowly creep into view. Suddenly, the cat lunges for the deer and pulls it to the ground. Subsequent clips show the lion dragging away the kill.

Spade, his wife, and the rancher watched the scene over and over, which, according to the internal camera clock, was filmed late on May 31. Over the years, Spade’s cameras had recorded skunks chasing off bears, bears breaking cameras, and a lot of deer, but never a mountain lion attacking prey. What makes the footage remarkable, Spade points out, is that “it’s not only perfectly framed, it’s perfectly timed.”

Spade later posted the video to YouTube, and, as it spread, people began to remark that he was lucky for getting the shot, which he lightly rebuffs. “I say five years of checking 30 cameras year-round every Sunday is not pure luck.” Fair enough.

“I look for any excuse to extend my time out in the woods,” he continued, “so this makes me want to get out with some new cameras.” But he plans to clean his camera lenses more, he said, “because you never know when you’re going to get that lifetime shot.”

You can see the original footage of the attack, and the rest of Spade’s impressive collection of trail-camera footage, at his YouTube channel.

The lion dragging away the kill:

Kris Millgate is a freelance writer and filmmaker based in Idaho.