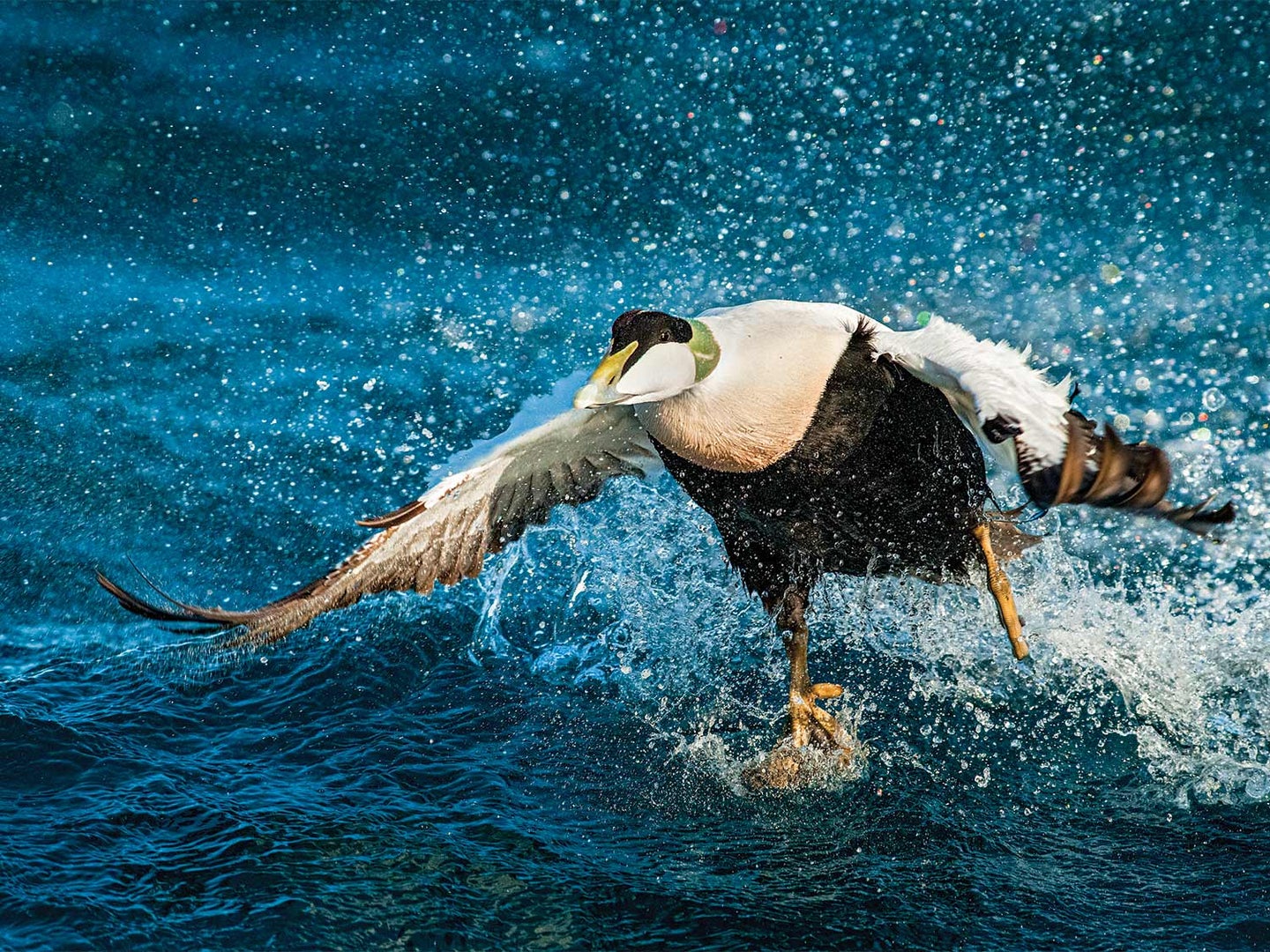 With the roll of every wave, our duck boat lost paint. We were inside a protected harbor, grinding against the rocks of the Point Judith seawall as the 2-foot swells rose and fell. Outside the wall, it was even worse, with white-capped 8-footers smashing the rocks and shore. Sitting in the bow of my buddy’s boat, I could barely see through the seawall’s east gap. A dark line of birds appeared through the snowfall, flying low. “Eiders coming,” I said. “Get ready.”

The birds flew directly for the wall, broke left, then came up along the rocks toward us. Then the birds veered back to the ocean, so shooting them would’ve required a dangerous open-ocean retrieve. Nobody clicked his safety off. We watched the eiders pass beyond the wall, and hoped for a change in weather and for more birds in the harbor.

The idea for this DIY Rhode Island eider hunt was hatched the year before. My friend Kevin Addy, an Avery pro staffer, had built an eider rig five-dozen blocks strong, ready for service. “Now I just have to figure out where to go,” he said.

My family is from Rhode Island, and I go back several times a season to hunt sea ducks. With Addy’s decoys, my local ­intel, and our buddy Roy Trainor’s 19-foot aluminum battleship that we’d trailer from New Jersey, our hunting plans were set.

On the first morning, our biggest concern was wind, which was gusting to 20 mph. But we took our time getting into position, and after watching waves of eider flights hover outside the seawall, we saw three drakes cross over the rocks. We knocked them down near the boat. Our friend Anthony Marsico picked up his bird—his first eider. “Awesome,” I heard him whisper to himself, looking over the gorgeous white bird. Trainor had killed a nice drake too.

The second morning, the wind relented, but the driving snow and sleet did not. ­Addy’s decoys, caked with snow and ice, didn’t look good. We packed it in early and planned to go home the next morning—​but then that evening, the weather finally broke. We made a change of plans.

When we reached the ramp two hours before sunup the next morning, we were the fourth boat in line. Clearly we weren’t the only ones watching the weather. That’s the risk of hunting a community hole like the Point, which is widely known and heavily pressured. But when the weather’s good and birds are in, none of that matters. The Point is worth the crowd.

We set up on the west gap near the shore. Through our binocs, we watched a raft of 100-plus birds riding the 3-foot seas without a care in the world. “They’re right there!” Trainor said, frustrated. There wasn’t much we could do. Then, later in the morning, a new group came in from up the coast, flying quickly toward us.

We hunkered down as a group of six made for our dekes. Eiders are big and awkward on the wing, and they look slow in flight—until they pass you. Then they seem to accelerate like a race car dropping gears and hitting the gas.

“There!” Trainor said, and we sent out a volley. Three drakes hit the water, skipping hard off the surface and settling belly up. More birds came. Marsico popped up and knocked down a brant. Then scoters arrived. We knocked down two, then held back the guns. We were here for eiders.

“Here we go,” Addy said again. A dozen birds hooked inside the sea buoy and toward us. Three tiger-striped hens led the string. We killed all three.

As we motored out to collect the birds, Trainor hollered, “Banded! I shot a banded eider!” In the boat, we all had a look. The band was worn so deep by salt and time, we couldn’t make out a single digit. We could only imagine where the hen had been—nested a few months ago on the shores of Hudson Bay, or possibly Greenland, before migrating south, living at sea, feeding on the mussel beds of Maine, and then finding shelter in Boston Harbor, along the Cape, before she ultimately collided with us.

This is the thrill of eider hunting: Braving the elements and taking calculated risks on the cold wilderness of the Atlantic, just to encounter these wild birds.

Gear Tip: Worth Their Salt

If you’ve hunted sea ducks before, you know how much of a beating decoys take. The birds finish low, and the shooting angles can be awkward. Plus, eiders are tough as nails and often require a coup de grâce while bobbing in the long lines. Greenhead Gear addressed all that with its Commercial Grade Foam Filled Eiders ($99 for four; averyoutdoors.com). They can take a pellet—or 20—and still ride high on the waves.

This story originally appeared in the October-November 2019 issue of Field & Stream.