It seems like everyone has a different opinion on how to change things—or if you even need you to change... 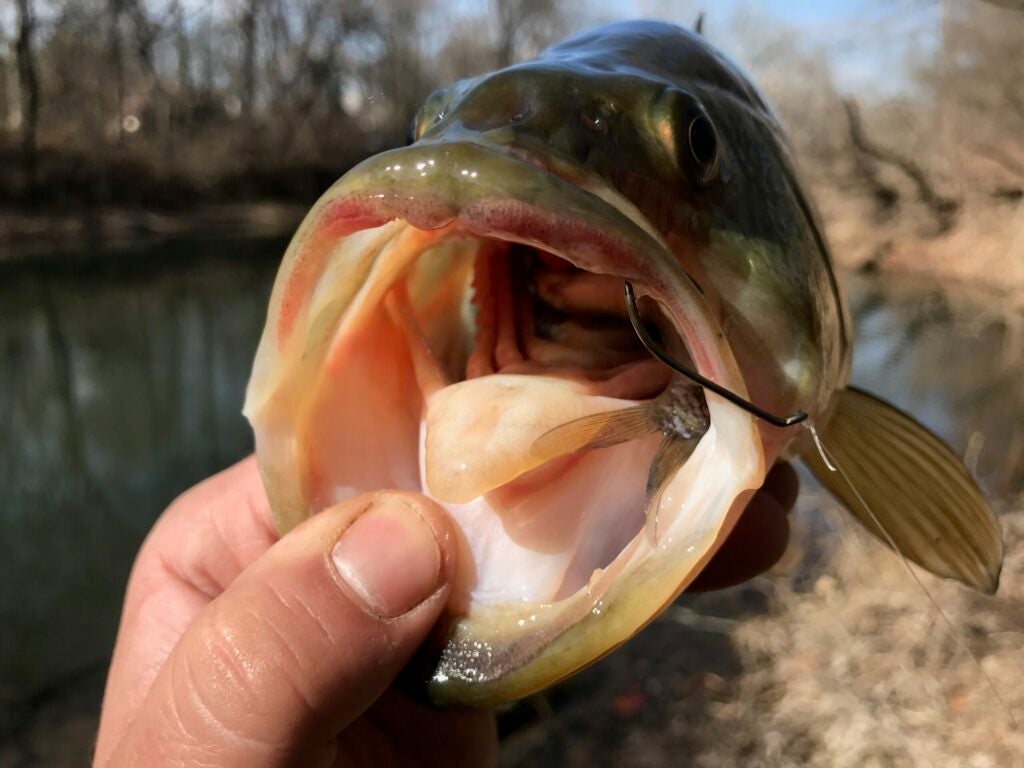 The location of a hook in a bass’s mouth can tell you a lot about your lure or bait choice.

It seems like everyone has a different opinion on how to change things—or if you even need you to change things at all—based on the location of a hook in a bass’s mouth. It is, after all, a subjective opinion that if a bass is hooked in the bottom of the mouth it’s because it didn’t fully commit to that bait. In my opinion you have to let the statistics play out with a large sample size in order to make the call to change, and quite often you aren’t given the opportunity to make it as cut and dry as you want because sample sizes are small. But regardless of how you feel about the hook placement argument, it’s worth a discussion and a second opinion.

I recently discussed hook placement with Clark Reehm, a full-time pro angler and guide out of Texas. Clark just happened to make a huge comeback in an FLW Tour pro event at Lake Travis by making a few adjustments based partially on how he felt the bass were being hooked. The first (and most basic) of which was the addition of a trailer hook to the spinnerbait. That’s like “Adjustments in Bass Fishing 101,” which goes like this: If the bass aren’t clobbering the big-hook bait, add a trailer hook. But beyond a basic adjustment like that there comes a lot of inherent philosophy on hooking bass “correctly,” and an angler like Clark that fishes almost every day ends up pooling sample sizes far beyond a limit or two of fish on a single day. He’s thinking in terms of thousands of fish caught over the course of years, and many factors play in his mind.

Our conversation regarding these philosophies took many turns but came to almost all the same conclusions. Overall, a bass that gets hooked on top of the mouth or deeper in the mouth is eating the bait better. A short side note is that even something as simple as hook type or knot type could affect this as well As an example, a snell knot seems to hook bass in the roof of the mouth more consistently when flipping. Basically, Clark puts more faith in adjusting bait size, or waiting for changes in the weather, than getting crazy about changing bait colors based on hook location in a bass’s mouth. To be honest, so do I. A great example he gave is that Texas bass anglers have come up with 9,000 variations of the red Rat-L-Trap, all because they believe the bass might eat one variation of this popular hue “better” than another.

Instead of falling into that trap (no pun intended), Clark looks for aggressive feeding fish and depends on a limited amount of colors. If the bass aren’t hooked perfectly, it’s more likely to be the location, the water temp/depth, the line size, or even the weather that’s causing hooks to end up in non-committal mouth spots. He’s more likely to move entirely than try a red Rat-L-Trap with rainbow stripes on the same spot. It’s also super important to take the time of the year into account. You may be getting short bites from spawning bass that are just nipping at the tail of a bait to remove it from their bed, hence hooking themselves in odd locations. The adjustment might just be to allow the bass to take the bait longer before setting the hook. Don’t overthink it, but if you’re foul hooking bass outside the mouth frequently, then that might be a better reason for an entire bait change.