Why November is the Peak Time for Squirrel Hunting

I’m not sure what sent me over the edge. Could have been the jockeying for stands on my hunt club’s... 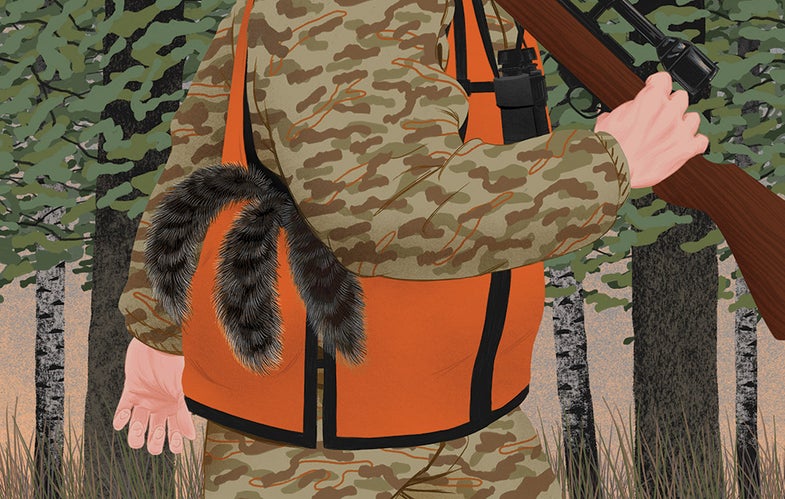 Don't wait too long before you hit the squirrel woods, or you might miss out on one of fall's biggest thrills.. Michael Marsicano
SHARE

I’m not sure what sent me over the edge. Could have been the jockeying for stands on my hunt club’s sign-up sheet. Or the growing weight of my hunting pack stuffed with three knives, two flashlights, surveyor’s tape, GPS, scent-killing spray, wind-checker powder, doe pee, and a carefully marked water bottle in case I wanted to take a whiz of my own without scent-fouling my blind. Might have been the trail camera whose all-seeing eye caught my attention as it captured my move up the ridge. Knowing that I would wind up on somebody’s laptop sucked some of the fun out of being in the woods in the first place.

So I walked back to the truck, drove out to a friend’s place where I knew there were no trail cams but plenty of squirrels, and slipped behind the horse pasture to the small creek that runs through the hardwoods. I had little more than a pocket half full of .22 hollowpoints and a flashlight. There wasn’t an inch of p-cord on my body, much less a compass. If I got lost in the 30-acre woods and had to bivvy without a bushcraft knife, I was toast, but the lightness in my pockets seemed to work its way into my soul.

I moved down through pines on a south-facing slope and leaned against a big shortleaf, 5 feet from the edge of the tangled oaks and thicket along the creek. Fifteen minutes of nothing passed, and then a treetop started shaking far off through the woods. I found the squirrel in my binoculars. (Yes, binoculars. Some old habits die hard.) I took a few moments to sketch out an approach route that kept me mostly in the shadows and the quiet pines until the last 50 yards. I put a foot down, slowly, feeling for twigs, and then the next.

It’s a bit of a shame that this was my back­up plan. When the acorns are still on the ground, squirrels race back and forth, cheeks and paws full of nuts, stashing them in tree hollows and along fallen branches and right out in the middle of the woods. You’ve been there, like I have, sitting in your deer stand. You can’t keep them straight: You know a squirrel scampered past on your right, but now you hear more scratching in the leaves to the left. Squirrel or deer? You can decipher the pattern six ways till Sunday and tell yourself that a deer doesn’t sound like that. But maybe it could. Then there are scratchings in the leaves all around. You give yourself a headache trying to keep up with what you know is a squirrel and what might be a squirrel and what you know isn’t a deer unless it turns out that it is.

That’s when you vow to come back after deer season closes—but the problem is, you can’t put squirrel hunting on the back burner, something to do when that’s all that’s left to do. The acorns will be gone. The squirrels will be spread out through the woods. You’ll wind up sitting there in January with a rimfire rifle, asking yourself, Where’d they go? What happened? No, you need to get on them when the getting’s good.

The first squirrel that morning was textbook. Picking my way through the woods, I needed a half hour to close the distance to within rifle range. The squirrel fed on black gum fruits plucked from the twig, and there was no dashing about to stash the goods. The squirrel gathered a fruit, held still while it stuffed its gullet, and grabbed another. Repeat, repeat, repeat, until I pulled the trigger.

There was a reassuring thump as the squirrel hit the ground, so I kept still. I heard the second squirrel long before I saw him. This one sent out a quaa alarm call that meant he was peeved at something but couldn’t figure out what had ticked him off. I didn’t move for a solid 10 minutes, other than swiveling my head slowly from side to side, scanning each tree in the foreground, then the middle distance, then way-the-heck-out-there. That’s how I saw the little joker, tucked tight into the right angle of a branch and a tree trunk, tail flattened over its body. In fact, all I really saw was a fuzzy, indistinct knob, something that didn’t look quite right on the tree. Only when I eased up the rifle to peer through the scope did I know for sure it was a squirrel. He’d settled down but was taking no chances. I had to hold off shooting until he moved his head my way.

With all the commotion, I thought a change of location made sense. I picked up the two squirrels and slipped into the creek bed to walk quietly through the water. Halfway back to the truck I jumped another squirrel. It raced to a holly tree and skittered to the far side—the oldest squirrel trick in the book. I scrunched down below the creek bank. I waited two minutes, then threw a rock into the creek on the far side of the tree where the squirrel was hiding. The second oldest squirrel trick.

Three shots, three squirrels, a two-hour romp in the woods, and I made my way back to the truck. The squirrels were warm and knotty-feeling against the small of my back. I stuck a hand in a pocket and fingered the bullets. I caught myself whistling.

The revamped user interface on the next-gen onX Hunt app only hints at all the goodies stuffed into the new version (starting at $30 per year; onX​maps.com). New maps carry every trail and two-track in the country; a wildfire layer loaded with wildfire names, dates, and fire boundaries; B&C records by species and county for all 50 states; and timber cuts on national forest lands back to 2002. Not enough? O.K. Geek out on map data for 16,000 prairie-dog towns.