Why Shotguns Are Better Than Rifles for Coyote Hunting

The case for hunting predators with a shotgun is becoming clear 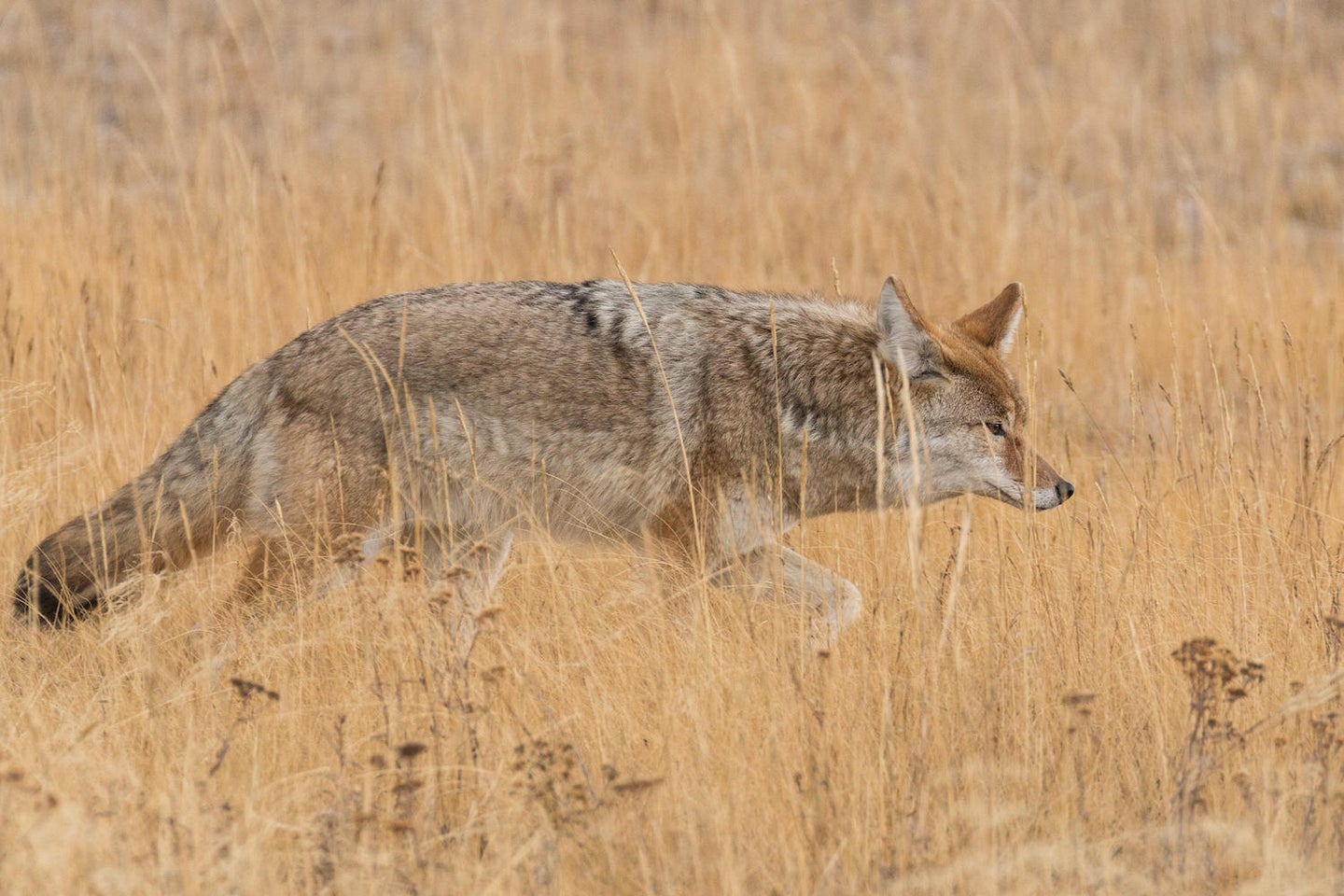 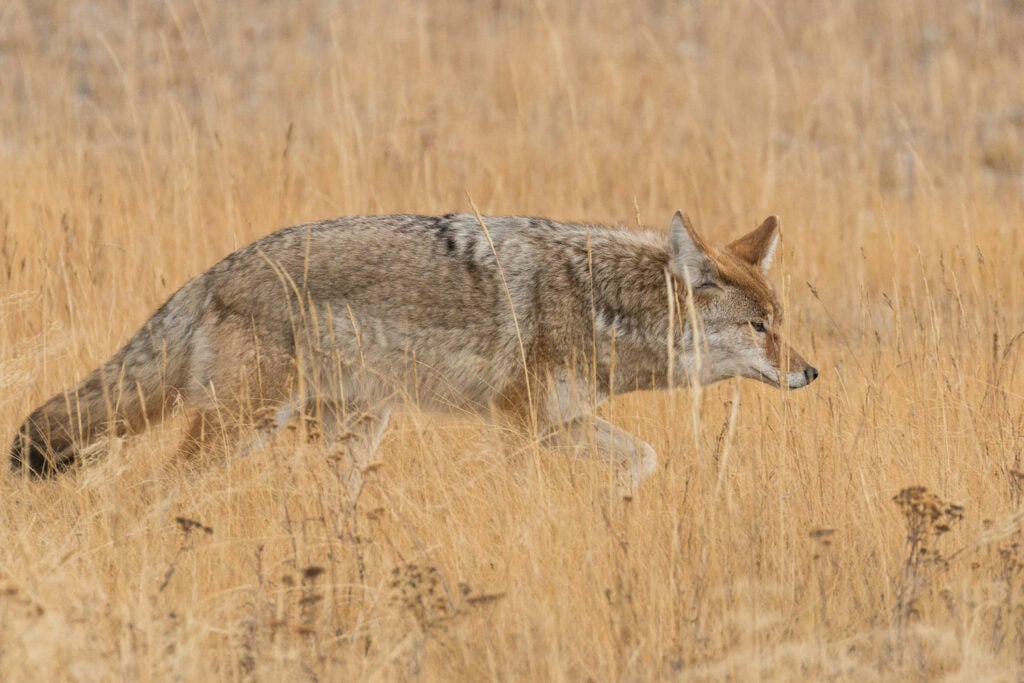 Coyote hunting in a field in Yellowstone National Park.

Hunting coyotes is even better if you use a shotgun.

Twitching, spinning, and bouncing furry decoys in the booths at SHOT Show kept distracting me as I walked the aisles on my mission of spotting Important Hunting Trends. Finally, when I stopped at the Primos booth expecting to find new turkey calls but instead saw the simulated rear end of a feline with a lashing tail—the Primos Stray Cat ($100), one of many motion decoys designed to lure a coyote to its last meal—I realized just what the trend was.

“Predator calls and decoys are hot,” Primos’s Mike Powell told me. “If our predator hunting sales don’t pass turkeys this year, they will soon.”

Callers and decoys are hot items as predator hunting grows in popularity. Rifle makers have introduced new coyote models. Although shotgun makers other than Remington have been slow to react to the coyote craze, many shotgunners have not. Flambeau’s Tad Brown showed me his company’s new M.A.D. Dog Pounder choke ($130), designed for coyotes. Brown, an accomplished turkey hunter who has been coyote hunting since before coyote hunting was cool, made the case for hunting the predators with a shotgun.

Brown began hunting coyotes in the Ozarks 35 years ago, hunting at night with a shotgun. Even today in broad daylight, Brown always chooses shotguns when he hunts rough or brushy terrain. “Shotguns are easier to hit with at close range,” he says. “They’re better for shots at coyotes running to the call, or ones that have busted you and turn to run.”

As a hide hunter, Brown notes that shotguns do less damage to pelts than do most rifles. Anything bigger than a .204 Ruger risks leaving a large exit wound that lowers hide value, but even large buckshot doesn’t pass through. There’s another compelling reason to choose a shotgun: “It’s neat to see one come from a quarter mile away and you shoot it with a rifle at 200 yards,” Brown says. “But if you have to shoot one as it tries to run up your pant leg—that’s a real thrill.”

Brown carries a Remington 11-87 with a magazine extension, the Dog Pounder choke, and a Nikon 1.5X–5X scope on top. He loads it with Hevi-Shot Dead Coyote 00 buckshot, which contains 12 .33-caliber pellets. His second choice would be Remington’s 3-inch, 15-pellet load of lead 00. The maximum range of a coyote gun, he says, is the distance at which it will put five to seven pellets of 00 buck in a 30-inch circle.

Fifty-yard patterns were devastating with all three chokes, and that is the distance I’d prefer to shoot. I’d call 75 yards the outside range for my gun. I would go with the T shot and either of the Carlson chokes if I wanted pattern density. On the other hand, the Dog Pounder shot some of the best buckshot patterns I’ve seen, which were surprisingly good out to 75 yards.

Typically, Brown puts his caller and decoy 80 yards crosswind of his stand. Coyotes usually circle downwind of the decoy to scan the area with their noses, and the setup is designed to bring them into Brown’s lap. “The decoy isn’t just an attraction,” he says. “It’s a distraction, too, that keeps the coyote’s eyes off me.” Shooting sticks help Brown steady his shotgun for long attempts when coyotes hang up. Just as important, they let him keep his gun up and ready, because coyotes, unlike turkeys, don’t gobble to tell you they’re coming.

Brown likes a head-on or quartering-on shot best, and he places the crosshairs on the coyote’s chest. For broadside chances, he shoots behind the shoulder to hit the lungs. If all he sees is the head peeking out of the brush at close range, that’s what he shoots. Some fatally hit coyotes require blood-trailing like a deer, but Brown says 80 percent of them fall over on the spot.

When a coyote is close, you should move only when it’s behind some brush or looking at a decoy. If one comes running in, bark—by mouth or on a call—to stop it. It works, some of the time. When barking doesn’t work to stop a close-in, running coyote, you kick yourself on the way to the truck if you brought a rifle. If you brought a shotgun, you carry a coyote out with you. ––Phil Bourjaily

How To Find Coyotes In Your Area

No amount of calling will work if there aren’t any predators around to hear it. One way to discover what’s out there is to check with local ranchers and farmers. In the West, talk to any sheepherders you run across, too—they often know where coyotes are denning. Still, there’s no substitute for searching for coyote sign on your own. Dirt roads are good places to start looking, as predators like to travel on them, and surfaces will show fresh tracks and scat.

Off the roads, coyotes often hunt along well-worn routes, or runways, that may form junctions at high vantage points. If you live in the north, a covering of snow will make finding fresh tracks a relatively easy matter. Look for dens in extremely thick cover on the sides of arroyos, riverbanks, and dry slopes. Scouting predators is hunting, and you should always have your calls and rifle with you. Coyotes are visually oriented animals, so move stealthily. Don’t let yourself be silhouetted when you top a ridge. Use cover as you move, and pay attention to the wind.

No mammal in North America is more vocal than the coyote. Use an electronic call to take advantage of this trait. Set up on ridges and above canyons to howl or make prey sounds in the hope of getting coyotes to call back, revealing their location. The best times to try this are in the late evening and early morning, when coyotes are back at their den.

Coyotes mostly prey on small game such as rabbits, squirrels, prairie dogs, and birds—not to mention smaller “game” such as mice. To draw a coyote into range, use a call that imitates the screams and distress calls of a dying rabbit or other critter. Coyotes can’t resist those cries and will come sneaking in from long ranges to check out the source. There is nothing wrong with using an electronic call (where legal)—but the real excitement comes when you pull in a predator with a mouth call. The two choices are closed- and open-reed models.

Closed-reed mouth calls have the advantage of being simple to use. The problem is that while you can produce different tones by varying the air pressure, most closed reeds sound pretty similar. In an area with hunting pressure, and where most hunters use closed-reed calls, coyotes quickly learn what those sounds mean. Because of this, Ross prefers open-reed calls. “I can manipulate the exposed reeds with my upper lip and cover a broad range of sounds,” he says. “And I can vary the volume better.” The synthetic materials of these reeds are also less likely to freeze than the metal in many closed-reed models. “Open reeds are tougher to use at first, but they’re worth the trouble.”

Time of year can make a big difference in determining which calls work best. From late September through November, coyote dens are breaking up, the pups dispersing to form their own packs. Howling, especially that reminiscent of a dominant male, may intimidate them. Stick to distress calls, which promise food. In February and March, when coyotes are looking for partners to mate with, howling may work, too. There’s no cut-and-dried an­swer to the question of how long to call. Predators usually respond within 20 minutes, though you may want to persevere in the presence of a lot of sign.

If a front moves in and you find yourself calling in high winds and rain, it’s best to hang it up for another day. Just be certain to scan the area before moving, in case there’s a coyote making a last-minute run to your location. ––Thomas McIntyre