Why South Texas Is the Hunt of a Lifetime

If you want a good shot at the buck of a lifetime, look no farther than South Texas 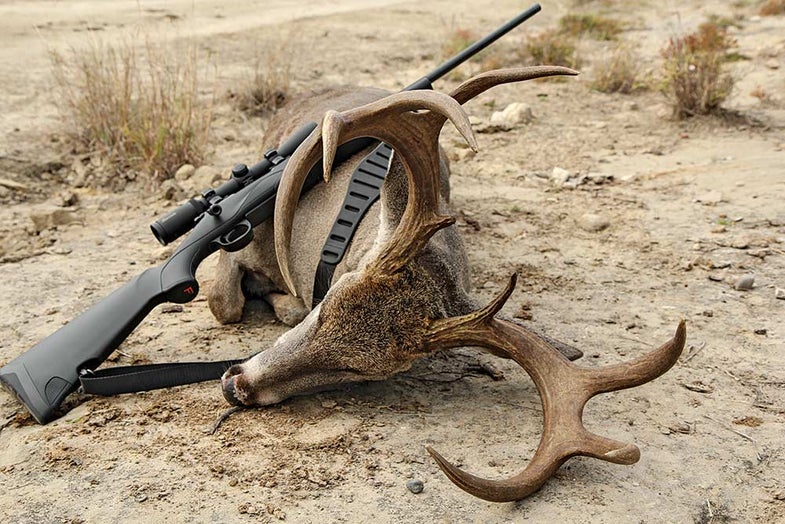 Top Heavy: The author's South Texas buck is one of his biggest whitetails ever.. Will Brantley
SHARE

Maybe I should feel guilty, enjoying the ease of South Texas as much as I do. No, it’s not the place for climbing mountains and suffering blisters and eating freeze-dried food in the snow. It’s where you settle onto a swiveling office chair in a box blind with a good rifle and extra ammo, because you’re going to see lots of critters that you’ll be encouraged to shoot. Also, it’ll be 70 degrees in December.

Yesterday morning, hunting near La Pryor, I killed one of my best whitetails ever—an ancient, heavy 9-pointer with chocolate antlers. This evening, I’m waiting in a blind with my buddy Jeff Puckett and our host, Charles Coker. Vibrant songbirds flit through the mesquite and cactus, while a covey of Gambel’s quail feeds right alongside the blind. Soon a doe with twins steps into view, and within a half-hour, there’s a flock of turkeys behind us, a half dozen more deer in front of us, and 200 yards beyond the deer, a sounder of wild hogs working toward us.

Puckett and I begin discussing which of the pigs are likely to be the best eating, and Coker points out a pair of 50-pound shoats. On a count of three, we drop the pigs in the sendero.

Texas has long been a top-10 whitetail state in the Boone and Crockett record books. The South Texas counties of Dimmit, Webb, Maverick, and LaSalle make up four of the top six counties nationwide for record-book typicals (all four counties are within the top 30 for nontypicals too). Along with neighboring Zavala County, these comprise the Texas Golden Triangle, the most productive region for big bucks in the Lone Star State—and much of the country.

Coker’s place, TC Outfitters ­(tc​­south​­texas​hunts.com), is in Zavala, and in a week of hunting there, I saw half a dozen bucks that would make even a serious deer hunter swoon—but they were off limits due to their young age. Statewide, nearly 60 percent of the bucks taken in Texas are mature (31⁄2 years or older), but bucks in the Triangle get especially old. The deer I killed, Coker says, was 91⁄2 years old. Though there are some high-fenced outfits in the area, most of the ranches here are free-range (Texans call it “low fence”). The bucks get old and big because the ranches are large and carefully managed. Many employ their own wildlife biologists.

The South Texas brush is dense and thorny and hostile. It isn’t country that you can slip into, find a pinch point, and hang a stand in (to say nothing of the scarcity of trees big enough for that). Most of the hunting happens around cleared lanes in the brush—called senderos—and feeders. If hunting over bait really bothers you, best take a trip elsewhere.

There’s also an ample supply of bonus critters—and that’s half the fun of hunting in South Texas. Wild hogs and javelinas are abundant and fair game on many ranches. On most hunts, you’ll be encouraged to shoot a couple of does too.

Texas is 95 percent privately owned, and the hunting here is big business; this isn’t a place where you can expect to knock on doors and gain hunting access. But if you’re saving for a once-​in-​a-­lifetime whitetail hunt—and like to shoot—I recommend a trip to this part of the country over just about anywhere else.

On the last evening, Coker tells us he knows of a place where we can get in a quick stalk on some javelinas before dark. I grab my rifle and jump in the truck. We’re onto a group of them in no time, and Coker encourages me to sneak in close and hit them with a loud predator call. “Be ready to shoot!” he says. “I’ve had them come charging in.”

Off I go, wondering why anyone would feel guilty for hunting a place that’s as much fun as this one.

For all this fun, I used a Franchi ­Momentum ($609) equipped with a 3–9×40 Burris ­Fullfield scope. Mine was a .308, though other ­calibers are ­available. I love that there are so many good budget bolt actions on the market ­today, and this is one of them. The Momentum is trim and light, with a comfortable, ­ergonomic stock, threaded, free-­floating barrel, and seven-year warranty.