Why You Shouldn’t Shoot a Refrigerator Full of Tannerite 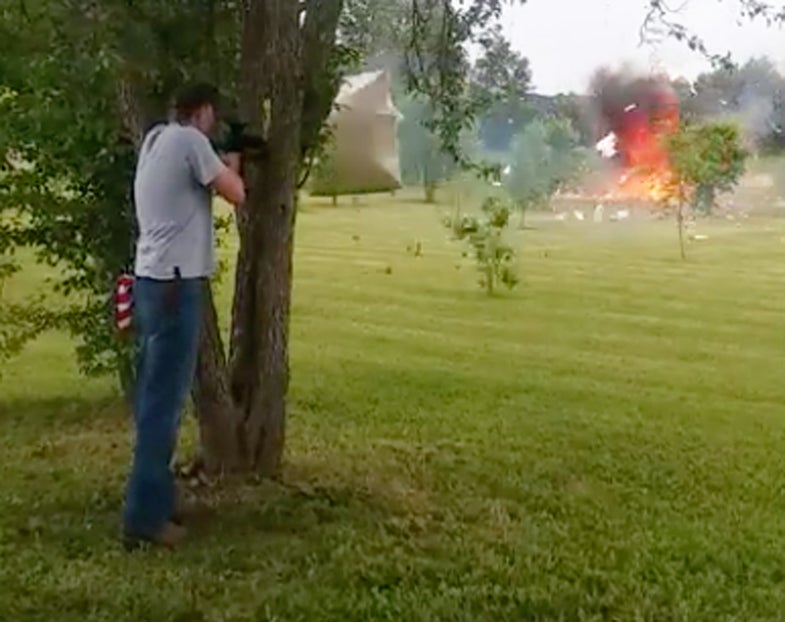 Kids, promise your mother and me you won’t do this kind of thing. We won’t necessarily believe you. We’d just like to be able to sleep at night.

The old refrigerator, packed with 3 pounds of Tannerite, sits maybe 50 yards away in a well-manicured landscape. Three men and a woman are going to shoot at it until it blows up. Fortunately, they’ve taken precautions. The shooter stands partially protected by a small, forked tree. The others aren’t in view but appear to be standing a few feet back, relying on the extra distance and their catlike reflexes.

Setting the rifle in the crotch of the tree, the shooter announces, “I’m gonna start kinda high and work my way down ’cause I don’t want to knock that over again.” Okay, right there you’ve lost me. If I wanted to avoid knocking over a tall, rectangular object like a refrigerator, I’d start low. But let’s not get bogged down by details.

He fires once, to no effect. The rifle fails to cycle, so one of the other guys comes forward to clear it. The shooter takes three more shots, then says he’s had it. His ears are killing him. Asked why he doesn’t have earplugs, he says he wishes he did. They’re at home in his toolbox. He tells another guy to “man up” and take over.

“Somebody’s comin’,” says the woman at the sound of an approaching car. They obviously know either that they’re doing something that smart people wouldn’t. Or maybe they’re trespassing. The car goes by.

The new shooter has better luck and nearly kills himself. The fridge blows on the first shot. Its lower door comes straight at him over the grass at great speed. It looks like some terrible ghost being summoned. It’s surprising that it doesn’t spin or get turned on its side and come at them edgewise. In which case it would slice through the little tree like overcooked asparagus. Instead, it slams into a bush 3 feet to the shooter’s left. He hasn’t even had time to flinch before the door hits the bush. Smaller debris rains down. “Holy $#!%!” somebody yells.

“Whoa!” exults the guy who forgot his earplugs. “Dude, that f%*$#ing door was coming right for you, dude!” The explosion has surpassed all expectation. It’s awesome. There’s a moment shortly after when the face of the woman enters the frame. She is bent over with laughter. Those crazy boys, you can’t help but love ’em and the hijinks they get up to.

The four walk forward to stamp out the little fires, whoop, and celebrate how badass it all was.

The whole video runs 5:19. If you just want to see the explosion, skip to about two minutes in.

What scared me most was the sense I got that what they’d learned from this was that blowing up old appliances is an amazing rush that they look forward to doing again. And, sure, you can say that idiots like this deserve whatever happens to them. The only downside is that idiots like this have parents and siblings and friends who love them.