The test results are in for this long-range cartridge 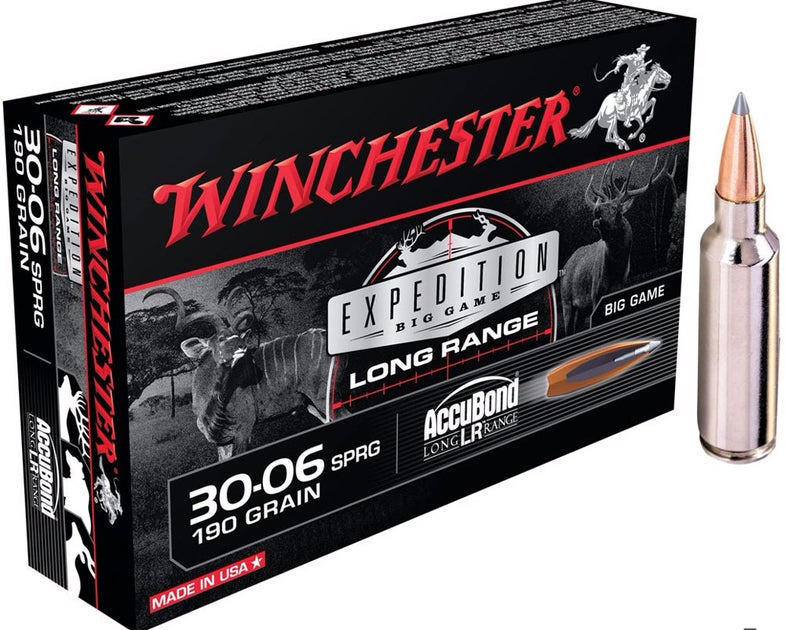 As I am now the Lord of Long Range, or at least the Maharajah of Mid-Range, Winchester has sent me a sample of its Expedition Big Game Long Range Ammo to try out. This is designed for shooting at critters up to 500 yards away, and is loaded with Nosler AccuBond Long Range bullets, which are designed to expand reliably down to 1,300 fps, as opposed to the original AccuBond, which is good down to 1,800 fps.

The AccuBond LR loading takes advantage of the principle that if you take a long, heavy bullet with a high ballistic coefficient and send it downrange at a reasonable velocity, it will shoot just as flat as a less streamlined but much faster slug, minus the brain-liquefying recoil.

Winchester sent me their .30/06 loading—190-grain AccuBond LRs at a claimed 2,750 fps. I thought it would be interesting to compare them to a non-long-range loading, and settled on Winchester’s 180-grain Power-Point ammo, which is their go-to deer load. Unlike the polymer-tipped AB, the Power-Point is lead-tipped, with lots of lead exposed, and is really more of a semi-spitzer than a spitzer. It’s designed to do be affordable and to dump every last living bit of energy in whatever it hits, which it does very efficiently.

My test rifle was my old Kenny Jarrett .30/06, which I chose because it’s a straight-up hunting rifle, and not a target gun or a hybrid. At 100 yards, the AccuBonds grouped into 1.3 inches (three-shot groups) while the Power-Points printed .913. Both types of ammo chronographed 2,550 fps, which was a surprise, and meant that the trajectory tests to follow would be a function strictly of bullet performance and not velocity. What was also surprising was that the ABs are advertised as leaving the barrel at 2,750 fps but fell 200 fps short of that. The Jarrett’s barrel is 24 inches; perhaps Winchester was chronographing from a longer tube.

What I found was that, at 300 yards, the Power-Points dropped 4½ inches below the ABs. (I couldn’t shoot at 400 yards, because our range is laid out for NRA competition, and there is no 400 yards in that world.) So I went to 500, and there the difference really became apparent. The Power-Points dropped 16 inches below the ABs, which is half the hairline-to-hairline depth on an elk, and all of it on an antelope.

More important, the Power-Points destabilized on their way to 500 yards, and I didn’t really have a group so much as a random scattering of bullet holes from which I had to deduce a center point. The ABs, however, held together for the whole trip, and I had a nice palm-of-the-hand-sized cluster that would have spelled certain doom for whatever I was shooting at.

Two cautions: Winchester’s data takes you out to 500 yards and no farther, and I’d abide by that. It is a very long shot by hunting standards, and if the maker feels that’s the limit, so be it.

And, you must shoot on a range to establish where your rifle hits before you take it hunting. Factory drop charts these days are uncannily accurate, but I’ve hardly ever sighted in a rifle that stuck exactly to the script.

Expedition Long Range comes in six loadings, from the deliriously popular 6.5 Creedmoor to the .300 Win. Mag. You can get more details from Winchester here.