If you’re in a fast-draw competition with a shotgun, you want a heavy gun 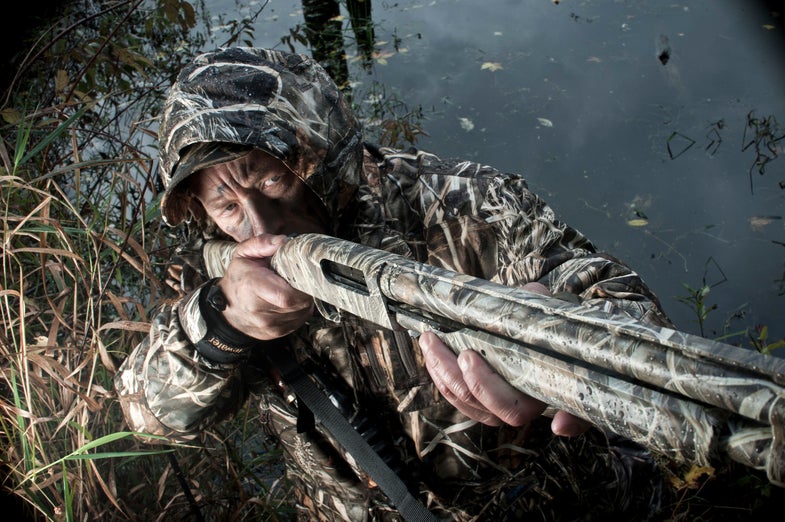 Earlier this week I wrote about how to shoot quickly. There is one last point to make on the subject: if you want to shoot quickly, shoot a heavy gun. It seems counterintuitive, since upland guns are supposed to be light and fast-handling.

And, light guns are easier to move, but fast-handling doesn’t translate into more hits, or even more speed. Heavy guns are smoother and surer to the target. Light guns are flighty and harder to manage. A couple of years ago when we did the Field & Stream shotgun test, we had our test team members take turns standing five yards behind a trap, shooting going-away birds with Full-choked guns, starting from a low gun position. The five of us used a 20 gauge 870 Express that weighed 6 ¾ pounds, an 870 that weighed 7 ½ pounds, and the same 870 with a weighted magazine cap and stock-mounted recoil reducer added, which bumped its weight up to 8 ½ pounds.

The heavy 12 gauge was the fastest gun, and the most accurate. It was nearly a quarter second faster to the target per hit than the 20 gauge, and with it we averaged 71% hits versus 63% with the lighter 20 gauge. The unweighted 12 was in between. I suppose we should have controlled for gauge in this test, but the targets were close and I don’t think the ballistic advantage of the 12 was much of a factor.

If you’re in a fast-draw competition with a shotgun, you want a heavy gun, but I wouldn’t necessarily recommend an 8 ½ pound grouse gun unless you’re J.J. Watt. Fatigue slows you down, and carrying a heavy gun through dense cover tires your arms by the end of a day in the woods. I shoot better with heavy, weight-forward guns, but I prefer light, muzzle-light guns for brush hunting because they are easier to carry with your trigger hand while you fend off branches with your front hand.

Shotgunning is often about tradeoffs, and that’s what we’re facing here: you can carry a heavy gun that tires you out but that you can hit with, or a you can pick a lighter gun that’s easy to carry, but harder to shoot well. There is no free lunch here, nor anywhere else.