Why wolves have little taste for humans in the New World 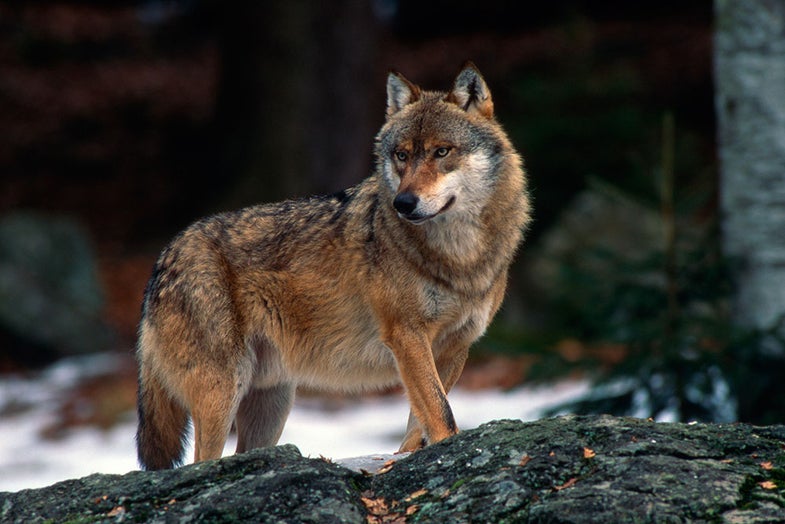 An Old-World wolf, in the Bavarian Forest National Park in Germany.. ImageBroker/Alamy
SHARE

One of the more interesting mysteries in Nature is, why have wolves dined on humans since prehistory in many parts of the world, but scarcely set fang to us in North America? I’ve seen a number of wolves in the wild and they’ve all been careful to keep as much distance as possible between me and them. (I’ve also seen wolves in zoos, and if you would like to see the definition of misery, go peer at a wolf behind bars for life.)

Lycophiles (This is ancient Greek for “wolf lovers,” and its use will cause you to wonder if there is any limit to my erudition. No, there is not.) become highly offended when told that wolves kill and eat humans, but it’s a well documented fact, and has been going on for a long time. France leads in fatal wolf attacks with 7,600 recorded between 1200 and 1920. This may be because France kept better records, or because the French tasted better than other nationalities, or because France had more wolves.

There are many attacks on record throughout Europe and Russia. In the Rodina (This is Russian for “the Motherland.” See my comment above.) wolf attacks are a staple of the culture, and gave birth to the musical narrative “Peter and the Wolf,” and numerous paintings of troikas (the classic Russian three-horse sled) being run down by slavering canids. After World War II, when 25 million Russians and 1.5 million Germans died in the Soviet Union and there were bodies all over the place, the wolves undoubtedly chowed down, developing a taste for flank steak of Ukranian and haunch of Hun. When the corpses were gone they turned to live meat, so much so that the Soviet government commissioned a study on the subject by a biologist named Petr Aleksandrovich Manteifel, who did not believe that wolves dined on people. His study, which was published in 1947, concluded that our furry friends not only ate people, but guzzled as many as they could possibly run down, and was immediately suppressed by the government.

Rabies is a major factor in wolf attacks. In August, 1868, at Fort Larned in Kansas, a large, gray, rabid wolf entered the post and bit six people and a dog before it was finally shot by a sentry.

Many attacks by wolves have been on children. Like all predators, wolves follow the path of least resistance, and learned early on that a 9-year-old human is much less likely to whack you with an axe or a shovel or shoot you than an adult human. Also, there’s less chewing involved.

In North America there are hardly any documented cases of wolf attacks. Going all the way back to 1781, there are only 32. That first recorded attack took place in Bennington, Vermont, on a group of four young women and two young men who were heading home after a quilting bee when they were set upon by a pack of wolves that was described as “starving.” Up trees the six went, but the branch on which Caroline Allen perched broke and she fell screaming to the ground, where the wolves made quick work of her. Her sweetheart, Harry Mason, who had climbed another tree with stronger branches , was so traumatized that he drank himself to death shortly thereafter.

I think that wolves in Europe and Russia developed a taste for humans because their predation goes back far into prehistory, when they discovered that Homo heidelbergensis was much easier pickings than wooly rhino. We’ll never know how many early humans ended up as wolf poop, but I’m sure it was a bunch. I can envision a mama wolf returning to her den, barfing up a freshly digested haunch of cave man, and saying “Try this, children. It’s not bad.” And the habit no doubt stuck.

Wolves in North America, however, ran into humans much later when we had developed missile weapons which took all the fun out of human-eating. Wolf sightings during the period when the United States and Canada were being explored describe the animals as timid and shy, and with reason. When we arrived in sufficient numbers we eradicated them wherever we could.

Hunters would do well to remember their role as conservationists when it comes to wolves. Otherwise, when all the wildlife we have left is cockroaches, crows, and coyotes, we’ll wish we had them back.