Just after Thanksgiving, my attorney* and I visited the auction house of James D. Julia, one of the foremost auctioneers... 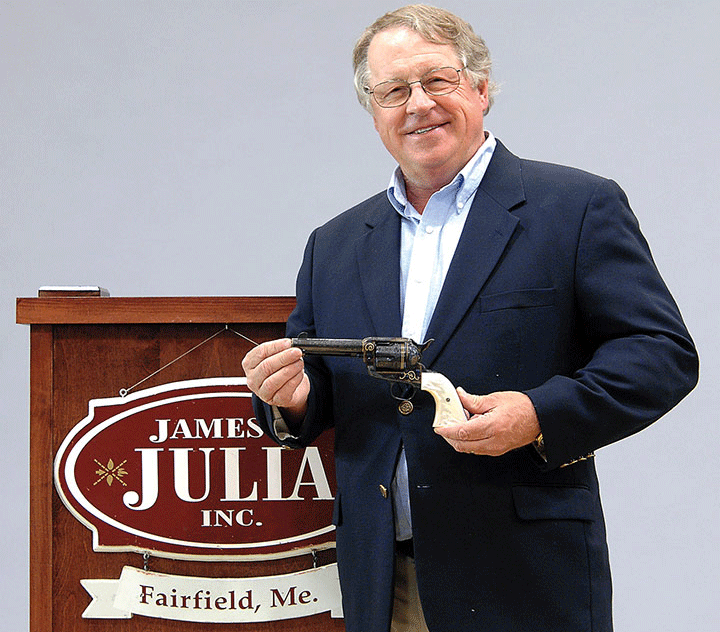 James D. Julia, one of the foremost auctioneers of rare and valuable firearms in the world. James D. Julia
SHARE

Just after Thanksgiving, my attorney* and I visited the auction house of James D. Julia, one of the foremost auctioneers of rare and valuable firearms in the world. It’s located in the town of Fairfield, in the desolation that is central Maine, and began in the 1960s in a small barn that was built in 1907. We were there because we misinterpreted the Julia policy on visitors; you are not supposed to drop in whenever you please. But we did, and because we are obviously old and addled, they took pity and instead of throwing us out on the highway, they assigned a staff member to show us around. It was very kind of them, and him.

Julia has gone through a progression of auction barns, and is now in a large and splendid one where they dispose of artwork and antiques as well as guns. The firearms are auctioned in October and March, and the auctions are conducted on two separate days. Day I is the Sporting & Collector Firearms Session, which concentrates on firearms in the $2,000-$8,000 range. Day II is the really exotic and expensive stuff.

Prior to the auctions, Julia publishes an auction catalog, which is a thing of wonder in itself. Printed on heavy paper, it is something to drool over. Perhaps that’s why the heavy paper, aside from getting top-quality photo reproduction.

We arrived after Julia had finished the October auction and was in the process of acquiring guns for the spring catalog, so we didn’t get to see hundreds of firearms; typically, 300 to 400 go on the block in the two-day period and, typically, bring in millions of dollars.

What we did see, however, was choice. Our tour guide was John Keene, whose title is BATF Compliance/Inventory Manager & Class III Specialist. Mr. Keene is a 28-year Army veteran and combat soldier whose job is to make sure all the automatic weapons that Julia sells are legal, kosher, and will not get the Treasury Department into Lethal Pounce Mode.

Full-auto guns that are registered with the Treasury Department** are very valuable, not only because of their rarity, but because very few of the large numbers that were made can be legally transferred. We saw a prime example: a Colt-manufactured Thompson M1921 submachine gun with a 50-round drum magazine. It was absolutely mint, as far as I could see. (A side note: Julia claims that they sell the finest guns in the world, and this refers to condition as well as quality. They don’t take firearms that are NRA Fair, or Poor, or possibly even Good, simply because they’re rare. I didn’t see anything that was less than NRA Excellent.)

At the time it was made, the M1921 was available to the general public for $200, which was half of what it cost to buy a new Ford. Sears, Roebuck sold Thompsons, and they were advertised in Field & Stream. This one will probably go for at least $30,000. There was a brass-framed and water-jacketed Maxim machine gun that probably dated from the late 19th century and an M50 Reising gun, a horrible .45 ACP submachine gun that weighed one half of what a Tommygun did and could be made for a quarter of the price. But M50s were so defective that they were issued only to Marines, who delighted in dropping them in the Pacific and stealing Tommyguns from the Army. Flaws aside, the Reising is now valuable because there are very few of them left.

On the civilian side, one of the Julia folks hauled out a 3-gauge shotgun, a monstrous side-by-side which I took to be over 5 feet long and 50 pounds. I thought it was a punt gun, but more likely it’s an early kiln gun. These colossal scatterguns were used in steel mills to blast slag out of kilns after they had cooled. You stuck the muzzles through a port in the kiln and touched off a humongous charge of No. 12 shot, and presto, no more slag. Kiln guns are still made, although in 8-gauge, and they look nothing like conventional firearms. There was an early 1970s S&W Model 29, 6-inch barrel, very dark grips, forged frame and all forged internal organs, absolutely pristine, that set my salivary glands into warp drive. There was a Browning High-Power Medallion Grade .375 H&H, I believe the first one I had seen since the 1960s, that was mint—absolutely perfect, as though it had just come out of the factory box, which maybe was the case. I had forgotten just what a beautiful job Browning did with these rifles.

For those of you who are not rich, or collectors per se, or Class III dealers, the real interest of Julia lies in guns like the Smith or the Browning. The really nice stuff goes to Fairfield, Maine—not the old, the battered, and the heavily used, but the firearms that have miraculously escaped the ravages of time and wear. Julia’s prices are fair. The starting bid for the Model 29 will be low enough that even I, an elderly pensioner, could compete for it. The rest depends on who else wants it, and how badly.

By the way, if you’d like to own two locks of George Armstrong Custer’s hair, which he had cut just before his Big Miscalculation in the Greasy Grass Valley, you’re too late. They were auctioned in October. JamesJulia.com

*I need frequent legal advice, and he is as crazy about guns as I am.

**Full-auto weapons regulations, like the Tax Code, comprise a nightmare of complexity, but as a rule, only automatic firearms that were legally registered and owned before May 19, 1986, can be transferred among Class III dealers. If your grandpa snuck an MP 40 home in his duffle bag in 1945 and you try to sell it, or give it away, or turn it in at the police station, you will either be shot dead on the spot or arrested and never seen again.