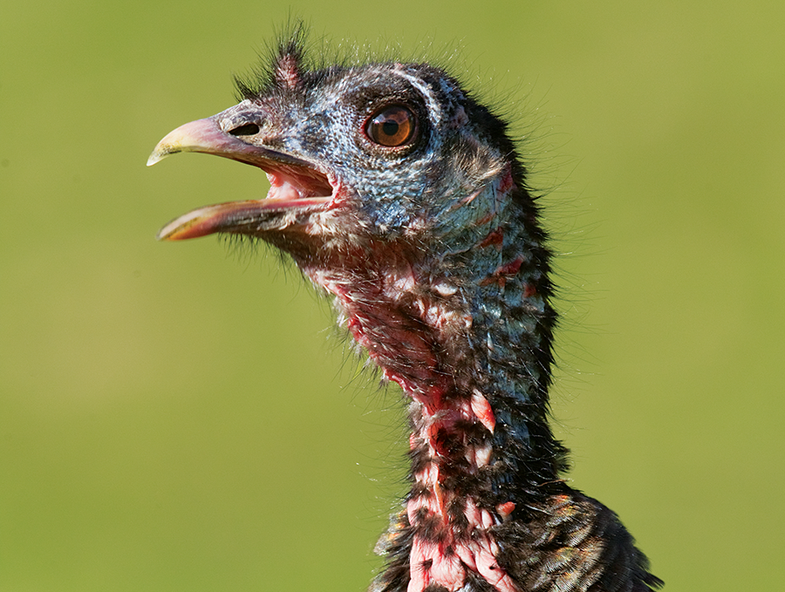 Ready to bust out some wild hen talk this spring? We tapped three champion turkey callers to reveal their top turkey calling tips—in their own words, one call at a time—for making latex, stone, glass, and wood sound exactly like the real thing. Using these turkey calling sounds will take your turkey hunting to the next level.

When a real hen yelps, she opens and closes her mouth with each note. I started out saying yelp into the call because that p ending made me open and close my mouth like the real deal. I don’t really say any particular word anymore, but one of my turkey calling tips for new hunters is to start by saying the word yelp.

You want a clear, high-pitched front note—yee—and a lower, raspy end note—elp. With most calls, you damp down the front part of the reed with your tongue and run air over the back center to get the high note. On a batwing, which I like, you run the air on the back right of the call. Then you just drop your jaw for that raspy elp.

Most guys think of cutting as excited clucking. But on a mouth call, they are two different beasts. To cluck, you gather air in your mouth and just barely let it out [see next section]. To cutt, you want to drive air straight through the center of the call, saying tick. Don’t use your lips—it’s all tongue. And say it sharp. Stay away from “machine-gun cutting.” That might be the biggest mistake people make. Hens almost always cutt one, two, or three notes at a time: tick, tick-tick, tick, tick-tick-tick, tick-tick, tick. Mix it up.

The trick to making realistic clucks is getting that bubbly sound. Close your lips and fill your mouth, and your cheeks a little, with air. Now slowly push that air forward and let it out by softly popping your lips: puht. It’s like the sound of bubbles popping.

A lot of guys can’t purr on a mouth call. Ninety percent of the trouble is the call. I recommend a light-latex double-reed. You can use some triple-reeds, but it’s really tough on a quad. Also, everyone thinks you need to roll the very tip of your tongue, but that makes it hard to get any sound. Instead, create back pressure by filling your mouth with air and pushing it forward. Then let it go as you flutter your tongue a little bit back from the tip, where it contacts the reeds. Keep your mouth and lips really loose, which creates even more vibration. And don’t overdo it. Real turkey purrs are quite short.

This is a little three-note whistle that content turkeys mix in when they’re clucking and purring, and it adds a lot of realism to your soft talk. Do the same thing you would to get the high note of a yelp, but quieter. Then softly say whit-too-whit into the call. The whits are fast, and the too is drawn out. Just do it over and over until it sounds like a hen.

Johnston used to listen to other callers, but it wasn’t until he started listening to turkeys that he got really good. “The easiest way to do it is on YouTube. It’s a great tool. Just search ‘wild turkeys calling’ and watch as many different clips as you can.”

A lot of guys draw circles with the striker to make a yelp—and don’t get me wrong, that’ll kill turkeys—but it sounds like wow, wow, wow. You want yee-ow, yee-ow, yee-ow, which is more realistic. To get that, draw the shape of a small hook—like a bream hook. Start at about 1 o’clock near the top of the sweet circle [see sidebar below] and move the striker right-to-left to make the hook shank. Then come down a little and around to finish off the hook. Just don’t come too far into the middle of the call.

If you can cluck, you can make all three. So let’s start there. Put the tip of the striker in the same place, and give it a little downward pressure. Then just pull toward you until it pops off. It’s like striking a match. To cutt, apply a little more pressure for a louder, sharper sound, and string the clucks together. To cackle, start with a few normal clucks, and then run eight or 10 together real quick, and end with a few more regular clucks. When I pick up the speed for the excited cutts and cackle, I drop my third finger off the striker. It opens up the sound so it really pops.

The very edge of a pot call is too high pitched, and the middle sounds dead. In between is what McGraw calls the sweet circle, a 3⁄8- to 1⁄2-inch-thick band all around the call. Always keep your striker in it.

Finger pressure is key for soft talk. If you hold the striker too tight or press too hard, the sound will be loud and sharp. I change my grip [see sidebar at right] so that the striker just kind of flops in my hand; that’s how you get that light, bubbly sound. I also lay the right edge of the pot against my leg, and cup my hand around the bottom of the pot. Then I open and close my hand to vary the sound and volume.
Cluck the same way, just softer. To purr, make a very small letter C, using mostly your fingers to move the striker. You can mix the sound up a little by drawing a tall C or a squat one, or even coming straight down the call. Using a variety of turkey calling sounds is key to improving your results.

I love to get close to the roost, and for that, a tree yelp is deadly. It’s easy to do, too. Just make small circles with light finger pressure. You don’t need that big two-note yelp here. Keep it simple and soft. I used to listen to a Ben Rogers Lee LP, where he said: “If a man can hear you tree call from 30 yards, you’re doing it too loud.” Don’t worry, the turkeys can hear it—and it really works.

McGraw’s Standard Grip:
Pinch the striker with your thumb and first finger (above). Lay your middle finger beside the first. Then wrap your third finger under the striker, so the top side of the finger contacts the peg.

His Soft-Talk Grip:
Pinch with pointer and thumb about halfway up the striker, so it flops a little. Then wrap your middle finger under the striker.
With both, hold the pot up in your fingertips, and rest the meaty edge of your striker hand on the call.

All you need to do with a box call to make perfect two-note yelps is hold the call and run the lid. But a lot of guys don’t take the lid out far enough or they pick the lid up off the call. With the box closed, let’s say the lid’s handle points at 6 o’clock. Open it to 4 o’clock to get plenty of that first, high note. Now rock the lid slightly so the left edge angles down as you come into the sidewall. It’s like leaning into that first note—YEE. Then just relax your grip as you come straight across, and the low note will be there. Close the box completely to end the first yelp, but don’t lift the lid to start the next. Go straight back out to 4 o’clock and do it again.

Cutting can be so realistic on a box call, but not if you’re just picking up the lid and slamming it down into the call, like a lot of guys do. Instead, you want to tilt the right side of the box 45 degrees toward the floor, open the lid to 4 o’clock again, and lay it down on the sidewall. Now, using only your index finger on the right edge of the handle, pop the lid up like you’re pulling a trigger. Pop it, let gravity drop it back down, and pop it again. Each cluck should sound round and bubbly—like the clucks of a real turkey. When you slam the lid down, it sounds more like a woodpecker rapping on a tree. Don’t worry about being able to cutt fast at first. Just get that good sound, and the speed will come.

Above is Strawser’s basic hold. “If you can’t do it this way, try just turning the box around—so the handle faces away,” he says. He also cuts down or removes the call’s spring (surrounding the screw) to help open up the sound.

Use the exact same mechanics for plain clucks, but don’t open the call quite so far or pull the trigger as hard. I can purr on a box call, but it sounds like a guy purring on a box call. If you want to do a really good cluck-and-purr combo, put the box call away and grab your mouth call or pot.

A long box is perfect here because it gives you more of the high note. When real turkeys kee, the notes climb—kee, kEE, KEE. To get that, you open the lid to the left and make short strokes from 8:30 to 8, then 8 to 7:30, and finally 7:30 to 7, which makes the lid’s contact point climb the slope of the curved sidewall. The whole time, you want to push the lid toward the screw, which is why I kee on the left side; it makes the pushing motion easier and more consistent. That tension combined with the climbing notes gives you the shrill, pleading, increasingly desperate sound you’re after.